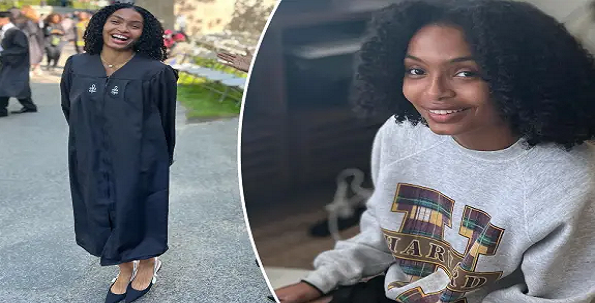 Yara shahidi studied at the African American departments at the university’s social studies and, focusing on Black political thought under a neocolonial landscape. On Thursday, Grown-ish celebrity Yara Shahidi completed her graduation from Harvard University in Cambridge, Massachusetts and commemorated the event with her proud parents. The actor’s father, Afshin,

commemorated the unique moment by posting a picture of the father-daughter together. In the selfie, posted on Instagram, the 22-years-old graduate is donning her black cap and gown with a stole wrapped over her shoulders. Her father captioned the picture by tagging her daughter and his wife, Keri. Shahidi and later Yara reposted her father’s picture on her Instagram account.

Beautifully surreal moment seeing our delicate petal in full bloom, Her mother also posted a picture of black-ish star smiling and carrying flowers after her graduation. On Instagram the actor was sharing photos of herself. She had had been preparing for the big day celebrating all week.

On Wednesday, she also shared a picture on the steps of the university campus with her brothers, Sayeed and Ehsan. The actor captioned her Instagram picture, T-Minus 1 day to GRADUATION so here I am, sharing this special moment with my most special day one’s. In 2017, Shahidi got admission into Harvard but starting her studies she took gap of one year. 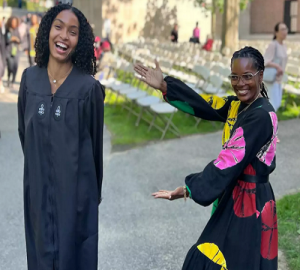 Ex-first lady Michelle Obama penned her a college recommendation letter. She told to Vogue, The actor studied at the university’s social studies and African American departments, focusing on “Black political belief under a neocolonial landscape.

She started to the Vogue magazine, It’s surreal to have finally hit this major milestone, I’ve known I wanted to go to college since I was four. By 17, I knew exactly what I wanted to study, so to see that come to fruition is a goal fulfilled.