A 10-year-old girl Jayla Dallis from Georgia is being hailed a hero after she saved her toddler sister 3-year-old Kali Dallis from drowning while they were swimming at the pool of the Chamblee apartment complex on May 15. Surveillance footage from the apartment complex revealed that Kali was walking into the shallow end of the pool with an inflatable device around her waist.

When she jumped off of one of the top steps, the momentum shifted and put her head first into the water, causing her to body to be stuck upside down in the inner tube. Footage shows that Kali tried to escape the inner tube, but the water was too deep. 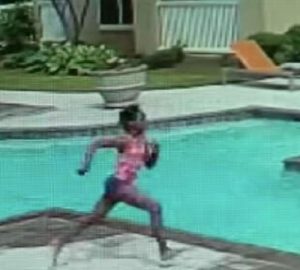 Jayla was in the deeper end of the swimming pool when Toddler Kali first went under the water but when she realized that her little sister was drowning, she raced into the swimming pool to pull her out by her hair first and then grabbed her by the waist and puller her up.

As Toddler was pulled out from the pool, the child’s aunt along with a staff member of the apartment complex frantically administered CPR, while another witness called 911. Ed Lyons, the police sergeant who received the call rushed to the scene and said that he felt extremely connected to the case as the girl laying there was wearing same kind of bathing suit his daughter wears too. 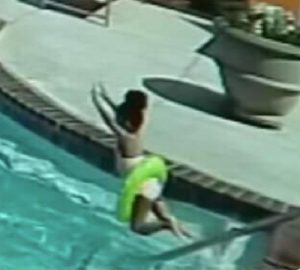 According to the latest guidelines from the American Academy of Pediatrics (AAP), children should learn to swim at the age of one but drowning is the leading cause of death in children in 1-4 age group only. Research has found that swim lessons are beneficial for children starting around age 1, and may lower drowning rates”, said Dr. Linda Quan, a co-author of the policy statement.

Experts suggest to take preventive measures while teaching your child to learn how to swim. if a child is not fully able to swim in the pool with an inflatable device, the parent or guardian also needs to be in the pool within an arm’s reach from the child. In this case Kali was rushed to the emergency room in critical condition. Thanks to her elder sister’s quick rescue that led her to a full recovery after two weeks.

Jayla’s mother, Daneshia Dallis, says that she feels incredibly fortunate to be able to take her daughter home. Daneshia wasn’t there at the pool that day but after she got a call from her sister she reached the hospital and watched the footage of heroics of her 10-year-old daughter who even started performing CPR before anyone else reached Kali. Daneshia remarked As a 10-year-old to even think about all that stuff in a traumatic situation is awesome, I’m so proud of her.