Happy Father’s day to all fathers out there. And Happy Juneteenth to everyone who celebrates #BlackExcellence in all it’s glory. Those are also the same sentiments Mariah Carey seems to share on this beautiful day.

The songstress is celebrating her heritage, as well as her late Black father…and her children are doing the same. Only factor that seems to be missing from Mariah’s homage is her ex-hubby and father of their fraternal twins, Nick Cannon…and she’s seemingly not alone on that one…just ask some of Nick’s other baby mamas as well. But we’ll recap the latter point in a sec.’

Anywho, Mariah took to social media to share her thoughts about the Juneteenth and Father’s Day holidays, by sharing a photo of her and Nick’s daughter, Monroe, and son, Moroccan. The photo displayed their precious mini-me’s happily embracing one another, as they seemingly stared at a photo of their grandfather, Alfred Carey. Mariah captioned the photo with the following statement:

It didn’t go unnoticed that Mariah conveniently left Nick completely outta the picture. This observation could mean absolutely nothing…or it could also possibly give insight into how Mariah currently feels about Nick and his fatherhood status as of late.

As many of y’all already know, Nick has been having babies left n’ right with several women, sometimes simultaneously throughout the past few years. He is currently the father of seven children total (one of them sadly passed away), with another two babies supposedly on the way. In case y’all are confused about Nick’s baby makin’ timeline (we most definitely understand), here’s a quick breakdown: 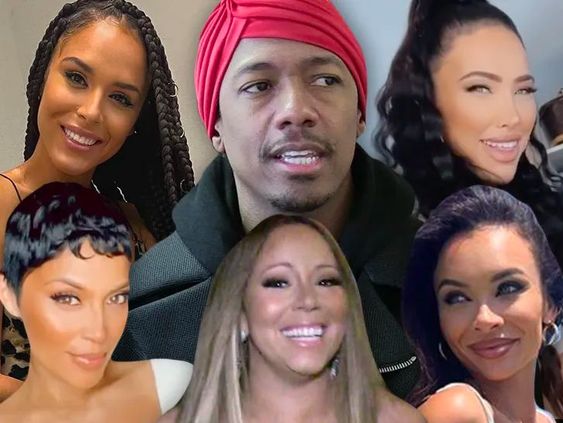 Via Parade —
—Mariah Carey (whom he was married to from 2008-2016) is the mother of twins Monroe and Moroccan Scott.

—Brittany Bell (his then-girlfriend) is the mother of Golden “Sagon” and Powerful Queen.

—Alyssa Scott (a model who appeared on Cannon’s music game show Wild ‘n Out) gave birth on June 23, 2021 to Zen, who was Cannon’s fourth child in the last year.

—Bre Tiesi (a model and actress) is currently expecting with Cannon’s eighth child.

There is also a ninth child reportedly on the way by Nick’s prior baby moms, Abby de la Rosa…according to The Guardian.

At this point, it’s unclear how Mariah really feels about her ex-husband poppin’ up with so many kids so quickly (he reportedly had four kids in one year alone). But it’s evident (at least thus far) that she is not down with publicly being thrust into the social media trap of now being referred to as one of Nick’s ‘many baby mamas.’ 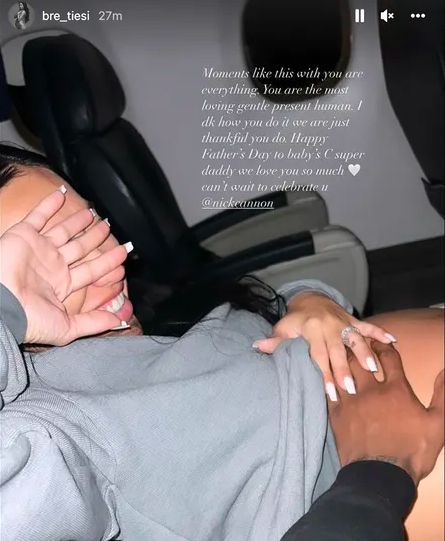 However, it is worth noting that one of the loves of Nick’s life, Bri Teisi, offered inside info about how well she and all of the mothers of Nick’s kids get along great:
“I feel like everybody is focused on their own family and their own situation,” she told The Daily Mail, “and we’re all very supportive and just respect that. Like, ‘That’s your family, this is ours and [if] you need anything, we’re here.’”

As far as any Father’s Day tributes to Nick by his other women, two of them have directly shown him public love on his big day. Bri Teisi, Abby de la Rosa, and Brittany Bell — each of whom Nick seems to currently be romantically involved with — took to social media to shout him out.

Nick has been straight up about his relationships as of late, revealing that he’s an advocate polygamous relationships, which he seems to have mastered very well. All of the mothers appear to maintain great relationships with him.

Moral of this story…as long as one can be a great father to his seeds, and maintain healthy relationships with all involved, then that’s all that matters. Nick seems to be doing a helluva job…amid his pretty busy personal life these days.