Johnny Depp won his defamation lawsuit against Amber Heard after several expert witnesses were called from both sides. Evidence was weighed, and the jury spent 13 hours deliberating over the six weeks they spent witnessing both sides tell their side of the story.

Depp won the lawsuit, and with it, $10.35 million in damages is to be expected from Heard. While fans of Depp have been celebrating, those who are still on Heard’s side have been calling the jury “racist,” with comedian Kathy Griffin openly insulting the actor.

She appeared on “Just Ask The Question with Brian Karem” as she shot one after another insult while still supporting the beleaguered actress.

"I love these johnny depp stans that are talking about this trial and yet they refuse to show a picture of what he looks like now, which is a big, orange, fat, bloated boozebag. He looks like Donald Trump with a ponytail." @kathygriffin pic.twitter.com/OaOTkFd62l

Griffin made an attack on his appearance, notably comparing him to Donald Trump. She said, “I love these Johnny Depp stans that are talking about this trial, and yet they refuse to show a picture of what he looks like now, which is a big, orange, fat, bloated booze bag. He looks like Donald Trump with a ponytail.”

“They keep sticking up for him being like ‘Amber is taking down Johnny, he’s so gorgeous and dreamy!’ and I’m like ‘okay, he talks like Kanye when Kanye had his jaw wired, he has a fake accent like when Madonna turned British…’”

“How can people not see through such an obvious affectation? And just the whole thing of how he had his digital warriors outside… this is a middle-aged man! This is pathetic!”

Griffin went on to reveal that she’s a friend of Heard and added, “I completely believe her.”

this is after she vehemently supported amber ❤️ pic.twitter.com/1ZNWI85L4J

“It’s actually disturbing to me as a woman and a lifelong feminist. There are stories that have been going around in Hollywood about him being an abuser since Kate Moss.”

Kate Moss had notably made a short appearance at the court after Heard mentioned her in her testimony. She made a strong statement denying any abuse allegations made against Depp during the time they dated.

Griffin had also claimed that Depp changed his tattoo for Winona Ryder to El Diablo, which is bogus that Heard herself denied as she spoke of the tattoo during the trial, painting Depp to be valuing the tattoo very highly.

Criticism at the insults thrown at Depp poured in as people quoted that both Kate Moss and Winona Ryder denied any abuse and insulting one’s appearance isn’t pretty either! 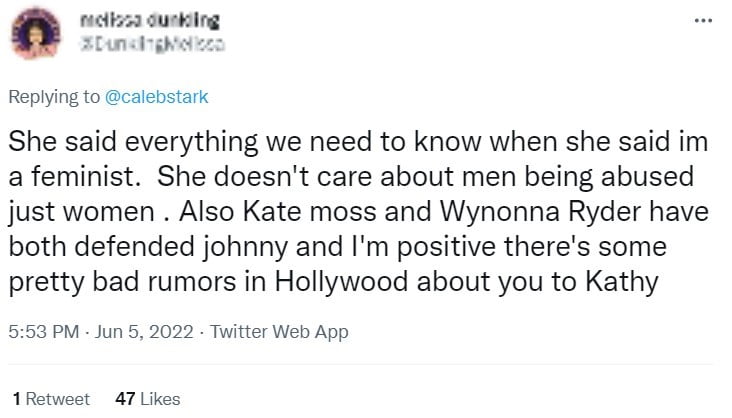