One little girl admired the garbage man after she offered him a special cupcake on her birthday, stimulating a beautiful friendship. The heroes of some children are different like their parents, teachers, or doctors. However, a 3-year-old Brooklyn idolized the garbage man. Every Thursday, Brooklyn stayed by the window to see for her regional garbage collector, Delvar,

who constantly honked the horn and waved to her. The Brooklyn grew up in Indiana where Delvar also worked as a garbage man. In 2016, Brooklyn’s birthday was on a Thursday, which means she would get to see her special person on her special day. On that day, she wants to hand a cupcake to Delvar for that she waited on sidewalk with the cake.

He passed and pulled over, this is how they met each other for the first time. Brooklyn was so enthusiastic, she was not able to say anything. But Brooklyn and Delvar took several photos together where words failed, photos didn’t. The next Thursday, Delvar was prepared. He came up with Frozen-themed gifts and balloons to commemorate Brooklyn’s belated birthday.

He even recorded a video for Brooklyn to demonstrated her how the garbage was formed and ladled. Delvar told as he ends the video, I got something special for you. Not so much smiley, but a little stinky. Hopefully you enjoyed the process and continue to smile, young one. 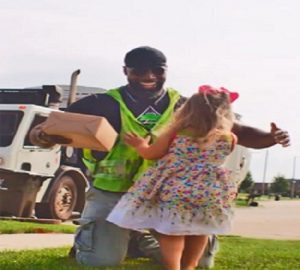 Brooklyn and Delvar’s friendship is pure and inspire people. Brooklyn is adorable with beautiful aura but Delvar earned gratitude and appreciation. Delvar knew that every week, at least one person would be there to applaud for him on as he labored. Brooklyn reminds us to scatter love and happiness to everyone we come into touch with.