Eddie Murphy, now in his 60s, grew up in New York in the 1960s and has been making people laugh for over 30 years with his humorous efforts in stand-up, television, and movies. From 1980 until 1984, Murphy was a cast member of “Saturday Night Live.” After that, Murphy’s options were endless. He went on to have a successful career as a comedian, writer, producer, and vocalist. His works include titles like “48 Hrs.,” “Beverly Hills Cop,” “Coming to America,” “Doctor Dolittle,” and “Shrek,” which appeal to both youngsters and adults.

Murphy won a Golden Globe in 2007 for his performance in “Dream Girls.” Murphy is a family man in addition to his professional achievements. He is a grandfather and the father of ten children! He prefers to be called grandpa as a grandfather because he feels it sounds better.

Murphy had two children from two different women in 1989 and 1990. Murphy married Nicole Mitchell in 1993 and they have five children together. Murphy and Mitchell divorced in 2006, unfortunately. Murphy has another child with Spice Girl Melanie Brown at that time. Murphy found the love of his life after he turned 50. He has been in a loving and healthy relationship with his long-term partner Paige Butcher, 42, since 2012. Butcher also co-parents Murphy’s other children, thus the pair has two children together.

Murphy has admitted that his family is the most important element of his accomplishment, despite his long career on and off the big screen. 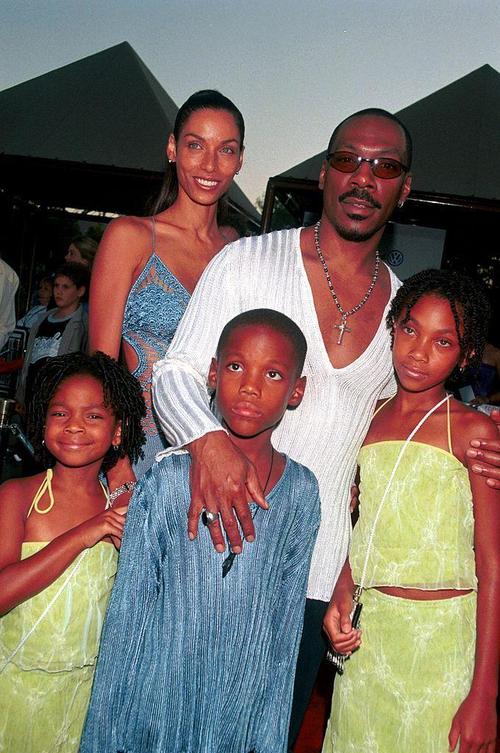 In an April 2021 interview with PEOPLE, the 60-year-old comic said:

“My profession, or who I am as an artist, is not central to my life. My family and children are at the core of my life. That is the primary relationship, and everything else follows. I have ten children, and I am present in their lives. You must strike a balance between your professional and personal lives.”

“The brightest part of my life is my kids […] My world revolves around them,” Eddie Murphy told Entertainment Tonight in 2016.

In an interview with HipHollywood, he said something similar: “I enjoy spending time with my family and children. And I’m always by their side.”

Having ten children is a huge feat. Large families are a blessing, but they are becoming increasingly unusual in this day and age. Murphy has said that some fatherly responsibilities aren’t his strong suit. “You know, I’m not a good… I don’t change diapers… ’cause I’d be bad at it, and that’s not fair to the child,” the actor and comedian told Extra in 2016.

And while having five different baby mommas may seem like a challenging situation to negotiate, the actor has stated that everyone in his family gets along swimmingly. The celebrity claimed that his home was filled with people and love.

“Everyone is pretty cool with each other, and it’s just love all the way around,” she says. “It’s a love fest in the house,” he remarked.

Murphy opened out about being a father in 2019 when sitting down with presenter Ellen DeGeneres on “The Ellen DeGeneres Show.” He sneered that he was no longer merely a father of ten children, but also a grandfather.

When asked how he enjoys his new life role, he replied, “I like it.” With children ranging in age from roughly mid-30s to toddlers, the celebrity is busier than ever.

Eddie’s interest on his family may be traced back to his childhood. Eddie admits in a 1987 interview that losing his father when he was young had a significant impact on him:

“I’ve been quite fortunate. My father’s death was the worst tragedy I’ve ever experienced. It was all messed up, guy. My age was eight. But I’ve lived a happy life.”

In 1969, his father passed away. Eddie’s parents had divorced a few years before, and he never learned the full story; all he knew was that a woman had stabbed him. With all of this in mind, it’s no surprise that the comedian is close to his family. He told People magazine in 2021 that he is proud of all of his children.

“I am extremely fortunate to have my children,” he stated. “There isn’t a single poor seed in my collection. ‘Oh you are the one,’ I don’t have any. None of that is available to me. My children are wonderful, regular people — none of them are like the Hollywood jerk kid “he remarked.