Oftentimes people look at celebrities’ fruitful life and seemingly endless income they have now, but overlook the trials and tribulations it took for them to actually get there. In the case of Tyler Perry, his life is a perfect example of that. Sure, today the New Orleans native is worth about $600 MILLION, but the pains he endured at the doings of his father (and other loved ones) hurt worse than 600 million punches, to say the least.

Why Perry’s Dad Had Him & Mom Arrested
In a prior interview, the director/screenwriter/actor recalled the time his father, the late Emmitt Perry Sr., called the cops on him; his mother, Willie Maxine Perry; and his sisters when he was younger. Emmitt was married to Willie Maxine at the time. Tyler went into detail about the day that his mom once got so fed up with Emmitt severely beating her and her kids, that she packed them all up and drove from Louisiana to California in their family car, leaving Emmitt behind.

Needless to say, their fleeing was a sense of relief for Tyler, because he was terrified of his alcoholic dad, whom he says never liked him since birth and physically abused him to no end. That sigh of relief came to a screeching halt soon after they’d fled though. You see, as payback for them leaving, Emmitt called the cops and reported the car as stolen. He even let it go as far as to have ALL of them arrested! Tyler says that when his dad came to pick them up from the county jail, he beat his mother the entire ride home! 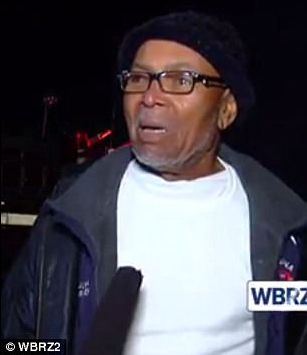 Tyler Perry also recalled another time when his dad beat him so bad as a child, that the skin was coming off his back:

Via Rolling Out:“You … jacka–! You got book sense but you ain’t got no … common sense,” he recalled his father, Emmitt Perry Sr., saying. “I heard this every day of my childhood,” Perry once said. But it didn’t stop there. One night, when his mother was gone, Perry claimed that his drunken father “got the vacuum cleaner extension cord and trapped me in a room and beat me until the skin was coming off my back.”

Perry Explains Why He Takes Care Of His ‘Abusive’ Dad
Tyler has many more abusive stories he’s shared about what he endured from his dad, but in spite of it all, he’s doing what many people would not for their former abuser. He’s taking care of his dad now and has him living in a plush home, with all of the perks included…EXCEPT there’s one thing Tyler refuses to give him:

Via Oprah’s Master Class- “As terrible as he was, and as horrible as he was, he never once left us. We were never hungry. And every time he’d go to work, all week, he’d bring all the money home. From a child, I had always known that this man despised me,” Tyler Perry stated. “I could not figure it out for the longest [time]. I could not figure out why he hated me so. Every action was about his hatred or his disdain for me. […] I’m giving him what he gave to me. I had shelter; I had food. He has shelter, pretty nice shelter, and any food that he wants to eat.”

But there’s one thing he won’t give his dad. “What I missed from him, being in a relationship, is also what he’s missing from me now. So he doesn’t have everything. He has what’s easy,” admitted Perry

It’s no wonder Tyler Perry -who was born with his father’s name, as Emmitt Perry Jr.- immediately changed his first name to Tyler, as soon as he was legally able to do so. He wants no parts of the vicious individual his pops is/was, to be a reflection of who he is as a man and a LOVING father to his toddler son today.