Esther Rolle is remembered most for her role as “Florida Evans” – the stern, but loving mother on Good Times. However, behind the scenes she was a very straightforward, strong-willed woman who did not compromise when it came to her beliefs and integrity as a human being and an actress.

As it is widely known, Esther said “peace out” to Good Times in 1977, originally stating that her departure was over ‘contractual disputes.’ But she later confessed that it was because of the ‘coonery’ direction she felt the show was going in, and she publicly called out the head honchos behind “Good Times” over it.

Esther Rolle’s outspokenness was a trait she developed long before Hollywood came knocking at her door. When she lived in Pampano Beach, FL with her Bahamian immigrant parents, sisters, and brothers (her parents had 18 children), she developed a high level of self-respect, personal responsibility, and a drive that led her to a career in performing arts. She elevated from performing in theatrical stage productions, to mainstream TV, and remained a firm supporter of Black artistic endeavors until she took her last breathe in 1998.

Rolle’s 1990 People Magazine interview gives a little more insight into the strong woman she was. Rolle discussed why she refused to ‘sell out’ to Hollywood for a paycheck, her refusal to walk behind a man, and a few other interesting facts:

Rolle has indeed been typecast as the maid, but it’s a part she has reinvented with pride. “I’m glad to take on the role of a domestic,”she explains, “because many of your Black leaders, your educators, your professionals came from domestic parents who made sacrifices to see that their children didn’t go through what they did.” But, she adds, “I don’t play Hollywood maids, the hee-hee kind of people who are so in love with their madam’s children they have no time for their own.” Whether playing a servant—or Lady Macbeth, as she did onstage-she consistently found herself in quality productions with meaty parts. […] Says Rolle: “I’m not so in love with material things that I’ll do anything for money. That allows me the luxury of doing things of value.”

Lighting up a cigarette in the two-story stucco house that looks out over downtown L.A., the majestic, sometimes imperious Rolle softens. She [longed] to tend her withered garden.[…] When worried or anxious, Rolle turns to her pots and pans. “Your mind flashes back to your childhood. You remember what Mama used to bake and you do that. Then you call some relatives over and you have a ball eating.” Would she marry again? “If I found somebody I could tolerate—or who could tolerate me. But I don’t walk behind no man.” 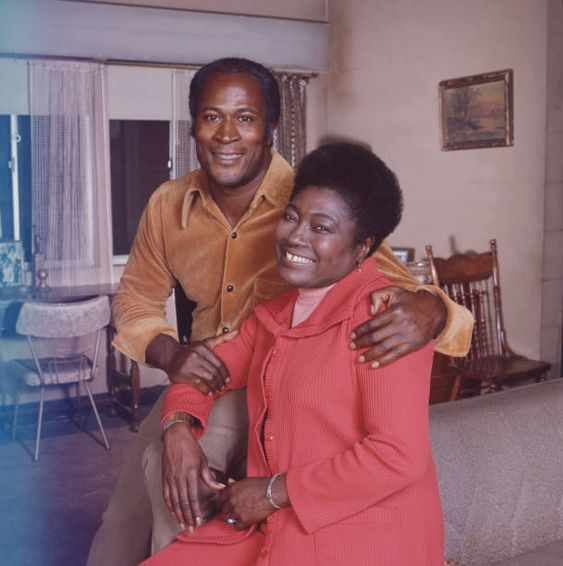 Ms. Rolle was finally fed ALL the way up with the “Good Times” ‘coonery’:

In 1977 Esther walked out of the still high-rated Good Times series because she felt the popular character J.J., played by Jimmy Walker, was tailored into a buffoon. “I told the producers, ‘I did not agree to do a clown show for you to degrade young Black men,’ ” she says. CBS won her back, but only for one more season. Rolle says it’s the kind of battle she’ll fight again if she has to. “I ruffle a lot of feathers,”she admits. “And I’m also selective—that makes you a troublemaker. But so be it. I laid a cornerstone for Black actors, and that makes me happy.”

And there you have it folks: Esther Rolle was no one’s push-over. We respect her for staying true to her beliefs. Job well done Ms. Rolle, continue to rest peacefully.