“One Tear In And They Charged Her $40”: Woman Shares How Her Sister Was Charged $40 For ‘Crying’ During Doctor’s Appointment, Goes Viral On Twitter

If you needed a sign that you might be living in a dystopia, this is it. Look, we all know that the situation with healthcare in the United States is ridiculously far from the best when it comes to supporting patients in their time of need. But the system is so broken, that it still somehow manages to surprise us in the nastiest ways.

Well-known YouTuber Camille Johnson shared on Twitter how her little sister got charged a whopping $40 for crying during a doctor’s appointment. The woman also shared a photo of the itemized bill given to her sister. Apparently, the “brief emotional/behavioral assessment” cost more than the capillary blood draw, vision test, and hemoglobin test.

Camille’s post quickly went viral and got over half a million likes in the span of a week. Scroll down to read what the YouTuber said about the entire situation, and how the internet reacted. Meanwhile, if you’ve ever been the victim of nonsensical medical charges, you can tell us about it in the comments, Pandas.

Bored Panda reached out to Dr. Andrew Carroll, the Board Director at the American Academy of Family Physicians, for comment on the US healthcare system, the viral tweet, and what likely happened. Read on for his insights.

Camille’s sibling got charged $40 for shedding a single tear, and here’s the proof 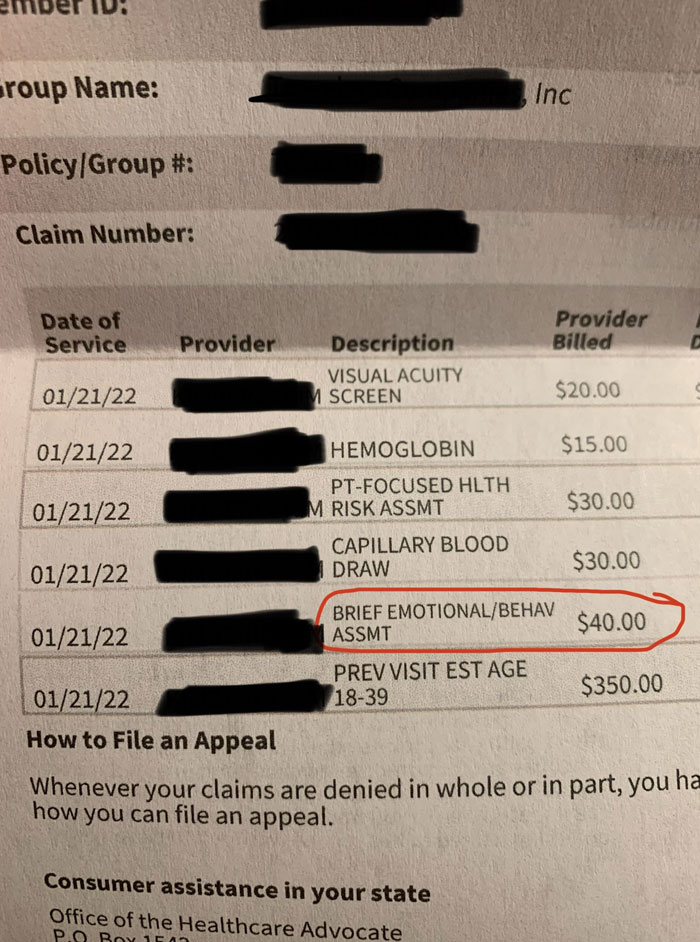 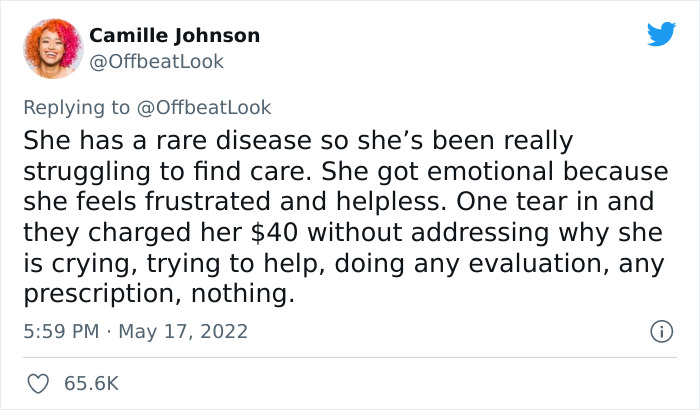 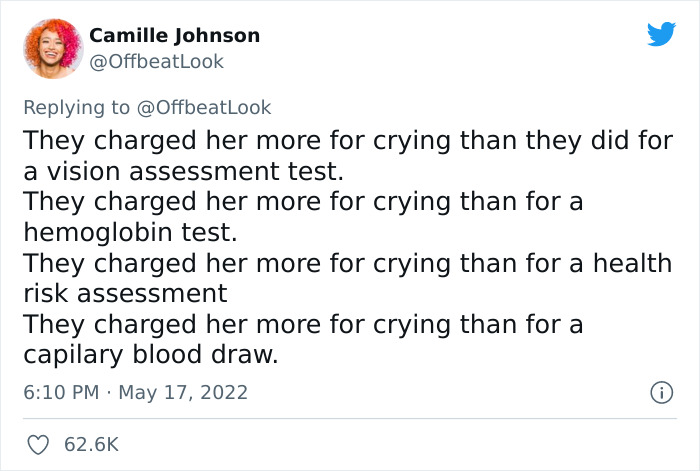 “There are different codes for different services performed, and since it’s a ‘fee for service’ system, hospitals often try to code up as many different services as they can to maximize their billings. We really need to move to a ‘prix fixe’ system to get away from this nightmare,” Dr. Carroll told Bored Panda.

“The code was likely for performing what is called a PHQ9 screening, which is a screening tool for depression. This screening does take time, but it’s not that much time. It’s unlikely that the billing was simply for observing someone crying. I’ve seen another bill for ‘Skin time’ which is placing a newborn baby on a mother’s chest right after birth, which is an absolutely ridiculous billing,” he said.

Dr. Carroll told us that he never charges for things like this, “but hospitals will likely charge for it, especially if they need to involve a behavioral counselor to assess the patient.”

We wanted to get the healthcare professional’s opinion on what someone can do if they believe that they’ve been overcharged at the hospital. He noted that there is a large difference between going to a private practice physician and going to a hospital.

“If it’s a private practice physician, it’s a good idea to discuss it with the billing staff or with the physician themselves. We have a vested interest in making our patients happy and hopefully continue to see us. We do perform a lot of services during a visit, and some of them are paid for by separate codes and some of them are not. If you believe you have been billed fraudulently, always bring it up with the physician’s biller first. It’s easier to get it resolved that way,” the doctor shared.

“If it’s a hospital, it becomes a much more difficult issues. Call the hospital billing department and ask them to explain the billing, and whether they’re willing to adjust or cancel billings, especially if you believe they were services that were not actually provided,” Dr. Carroll said. “If that fails, call your insurance company to dispute services, because your insurance company doesn’t want to pay that bill either. Finally, if you believe you have been billed fraudulently and have not gotten relief from the hospital or insurance company, you can call an attorney to help you out. Medicare also has a hotline for calling in fraudulent billing which you can use if you haven’t gotten relief.”

Camille, who is based in Brooklyn, shared that her sister had been struggling with her health recently, as she has a rare disease. She’s had trouble finding care. According to the YouTuber, all it took was for her younger sibling to shed a single tear and she got charged the full $40.

She also claims that the doctor never addressed why the patient was crying. Nobody helped her. Nobody did any evaluations whatsoever. It was seemingly a superfluous charge. It’s hard to trust the healthcare system and the folks working there when stuff like this happens.

Unfortunately, this isn’t an isolated incident. There have been earlier reports of people getting billed for getting emotional and crying. It’s dystopian to the max.

Camille moved to New York in 2016 to pursue a career being a full-time online content creator. She focuses on helpful and entertaining videos about beauty, fashion, hair, and lifestyle. Camille calls her fans and community members ‘Camilleans’ and values self-expression, as well as empowering others. Health and happiness lie at the core of what’s important to her.

This wasn’t an isolated incident. Other Twitter users pitched in with similar examples of being overcharged at the hospital for ridiculous things 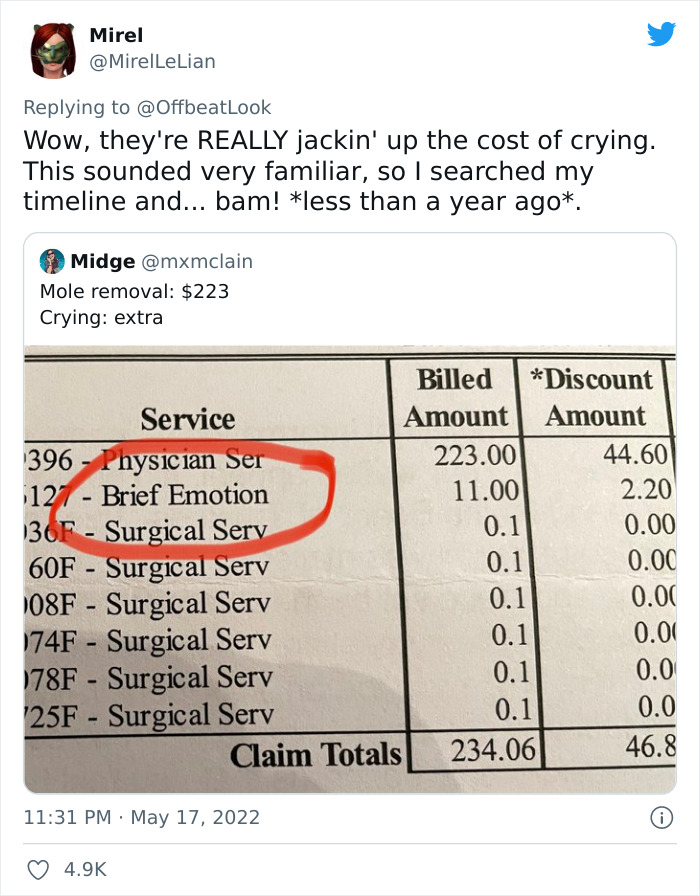 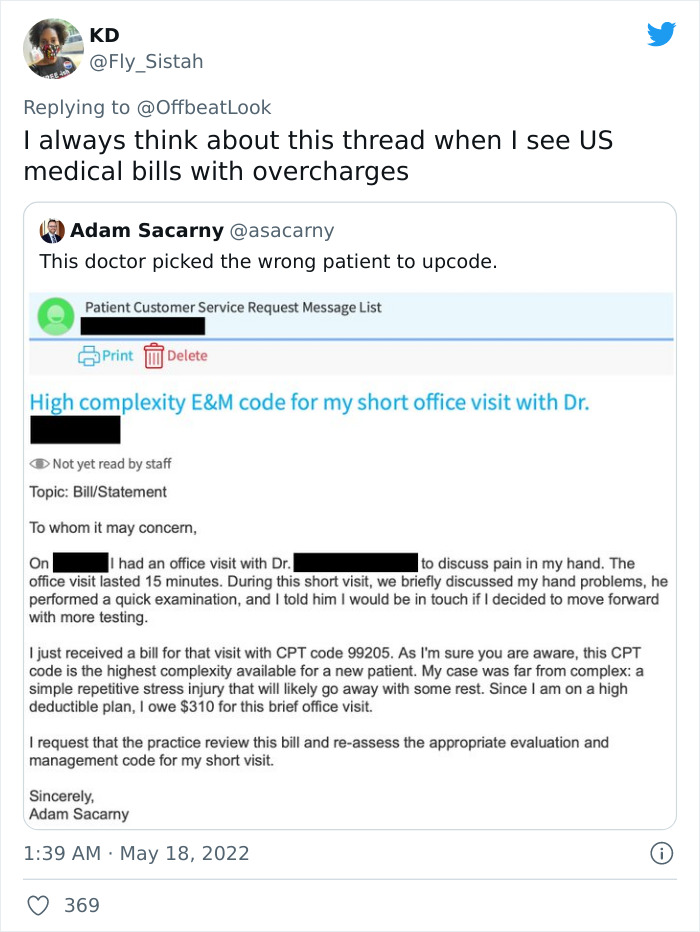 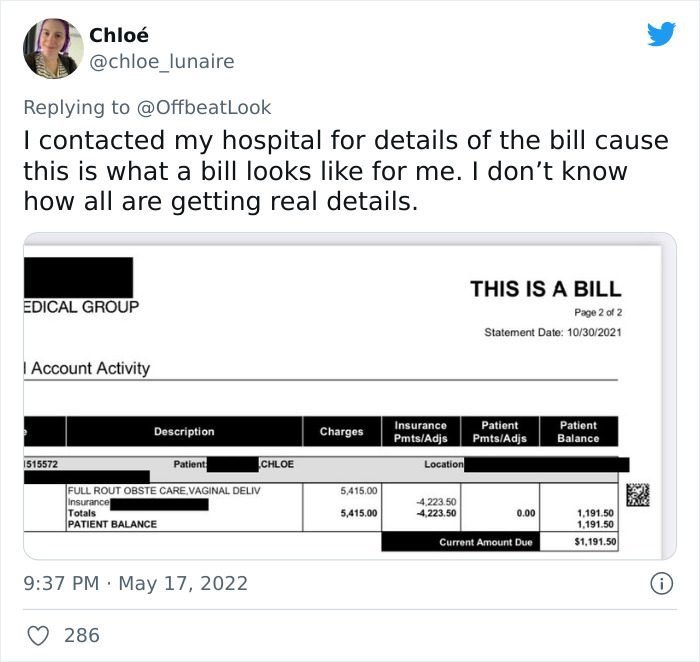 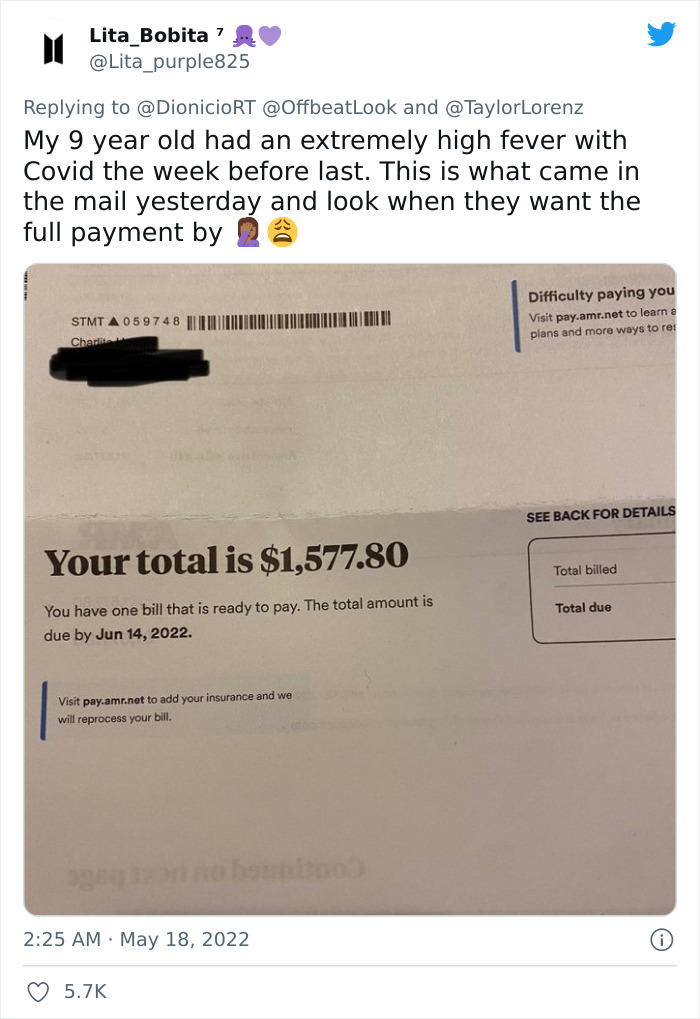 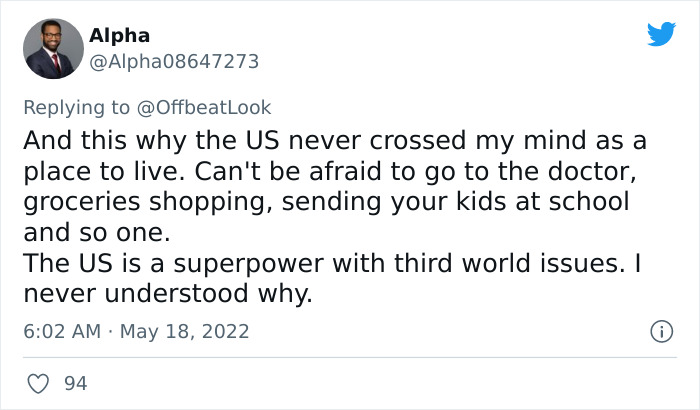 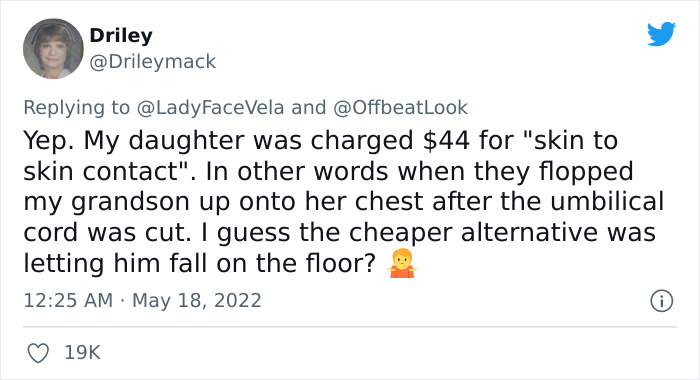 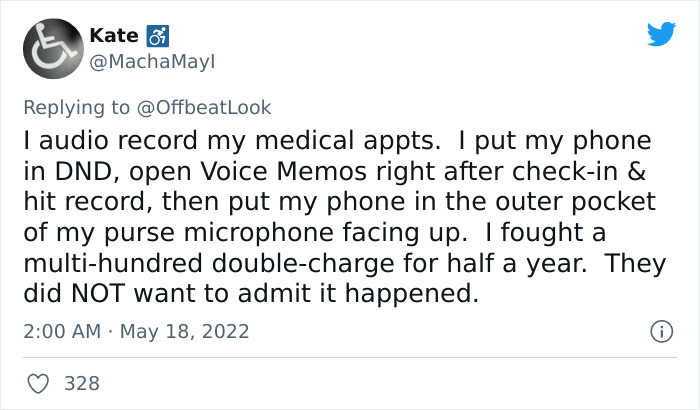 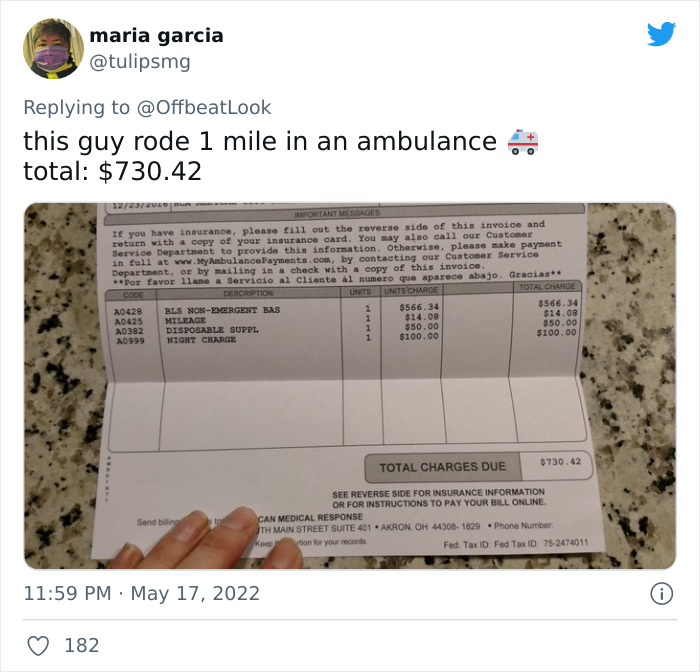 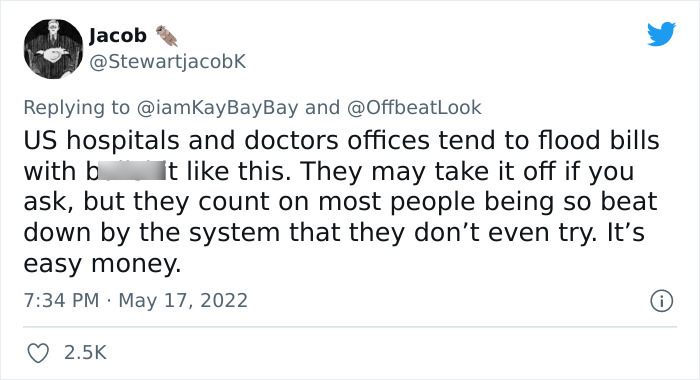 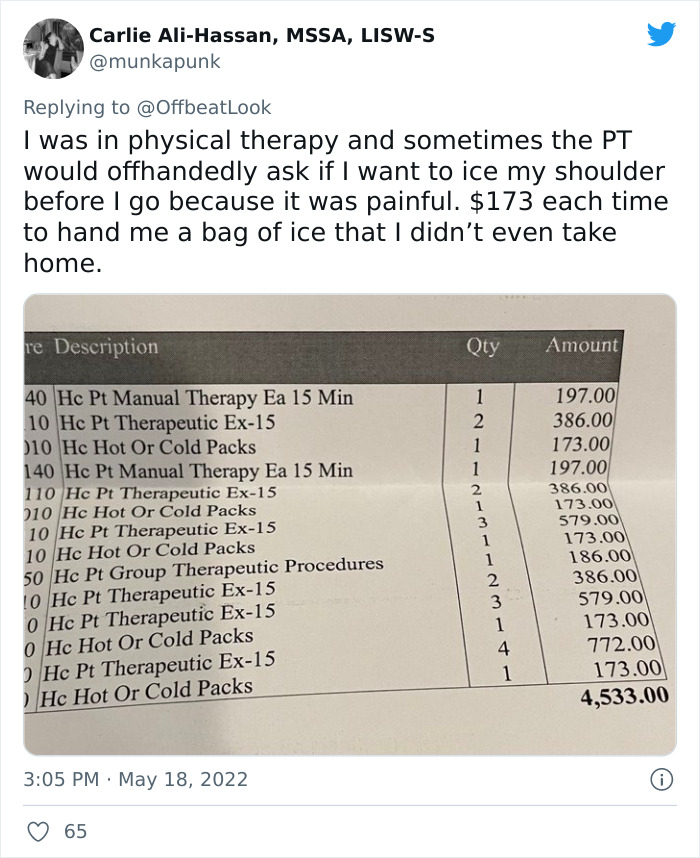 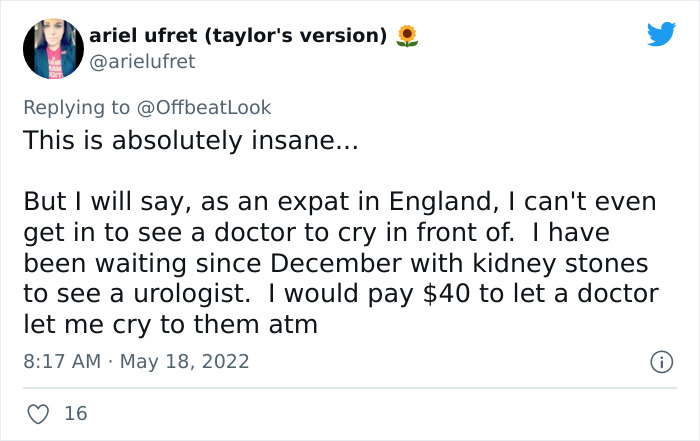 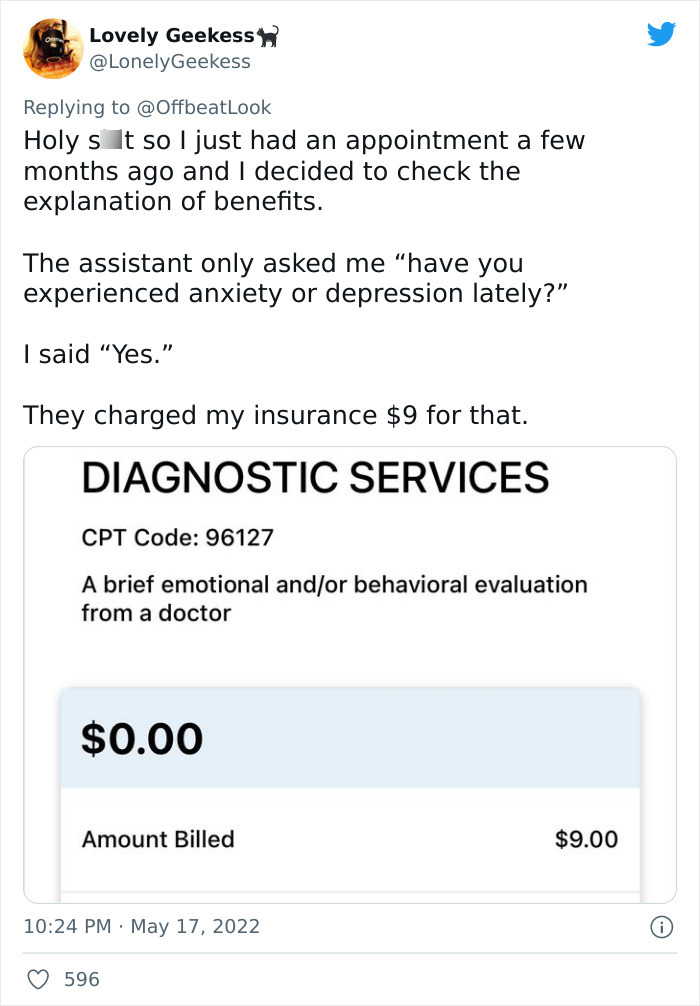 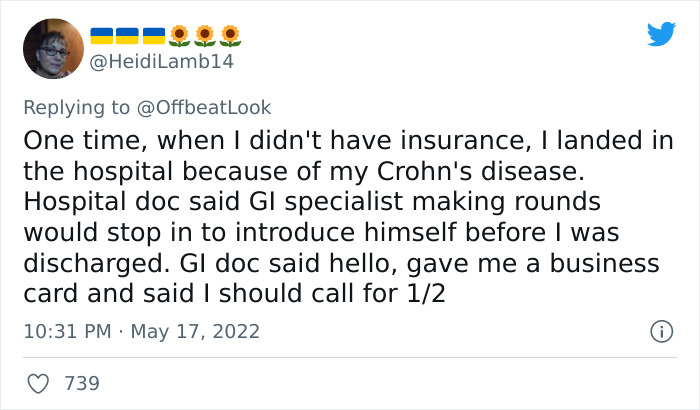 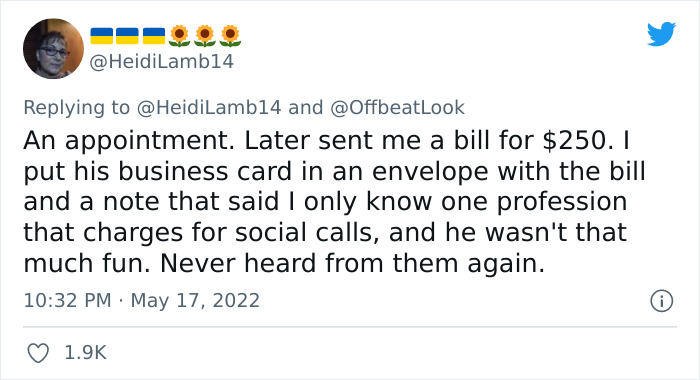 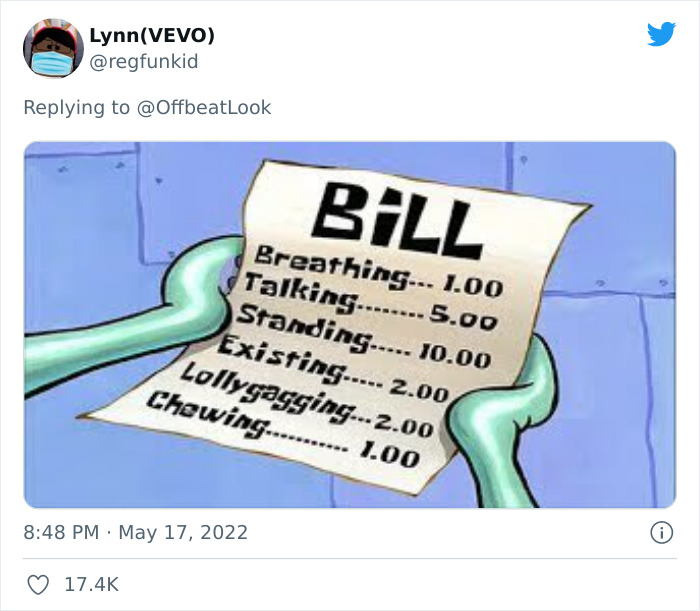 Bored Panda has analyzed exactly why the healthcare system in the US is so weak when compared to other developed countries, time and time again. In short, there’s very little actual competition within the system, meaning certain companies can dominate the field. What’s more, a huge amount of money gets wasted on bureaucracy, leaving far fewer resources to be spent on the patients themselves. To sum up, it’s a system that puts finances above people. And it shows.

Dr. Carroll, a healthcare professional from Arizona, previously explained to Bored Panda that there are clear financial incentives for healthcare insurance companies to keep the system as it is and avoid changing it. That means sticking to high administrative costs.

“It will be very difficult to reduce the administrative costs without overhauling the payment system altogether,” the doctor told us.

“Unfortunately, these payers tend not to have altruistic intentions towards their members. They cater to the advantage of the employers paying for the benefits, who want to try and spend the least amount of money they can,” he said.

“Employers that pay for benefits will need to demand more of the companies providing the benefits or patients will need to file class-action lawsuits to demand that benefits due to them are not unduly restricted, as they are today.”

Insurance companies are very deeply involved in the provision of care for their patients, Dr. Carroll said. “Their job is not to pay for healthcare but avoid paying for healthcare. It is a terrible system,” he explained.

“We are trained very early, almost like soldiers, to work hard and long hours, deal with extremely stressful conditions, and work through the emotional turmoil of death, debility, and the effect those things have on the patient and their families,” the doctor said that healthcare professionals have it incredibly tough as well.

“I love what I do because I could not see myself doing anything else. I’ve wanted to be a doctor since I was 5, since I myself had a major medical issue. I remember the care and compassion my doctors when I was that age showed me, and helped me get through my very tough time. I wanted to do that for others, and so far I think I have done so. Insurance companies make it difficult though, and nearly force cold, inhumane, and compassionless rules on patients when they are most vulnerable,” Dr. Carroll told us.