Mom Who Doesn’t Allow Her 8 Y.O. To Eat Cake Is Livid When She Finds Out His Friend Convinced Him To Eat It On His Birthday

Every parent has their own set of rules that they give their children. It is easy to check if children follow those rules at home but when they are at a friend’s or at school, parents don’t really know if their kids are doing what they were told.

One mom on Reddit has a lot of rules about what her son can eat and cannot eat, which mainly includes junk food and sweets. She wouldn’t even let her son eat cake on his friend’s birthday; however, he did and now she asks if she is being the jerk for getting upset over it.

Mom doesn’t let her son have cake ever and when she found out his friend shared a piece on his birthday, she wanted him punished 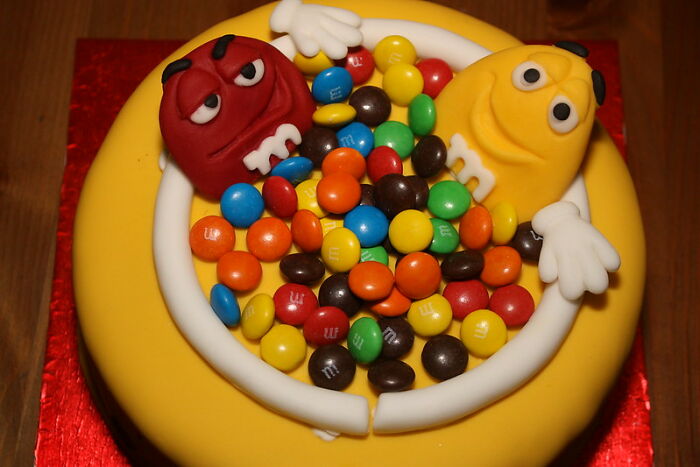 The Original Poster’s (OP) son is 8 years old and his friend’s mom is the OP’s long-time friend. She explains that she doesn’t allow her son to eat junk food at all and she is so strict about it that she even gives the son snacks to bring to events where hosts may provide sugary food.

Recently he went to his friend’s birthday party and the friend’s mom likes baking, so she was the one baking the birthday cake. However, the OP didn’t want her son to eat the cake because he isn’t allowed to have any altogether.

The son’s friend is actually the child of OP’s best friend and they all knew she doesn’t allow her son any junk food, including sweets

The mom explained that it was not because of medical reasons or allergies, rather it is just a decision to protect his health as it is known that sugar and junk food is not that healthy.

The boy told his friend about it, but he thought it was quite weird not to eat cake on a birthday, especially when it was home-baked. So the OP’s son ate it and according to her, got a sugar rush.

It’s not because he’s allergic or diabetic, but the mom thinks that it will benefit her child’s health in the long run

It’s not because he’s allergic or diabetic, but the mom thinks that it will benefit her child’s health in the long run

That made the boy crash and be cranky for the whole day when they got home after the party. Sugar rush is actually a myth and children don’t become hyperactive from having sugar. Studies have shown that parents observed their children becoming active after consuming sugar while they were already having fun and playing, for example, at birthday parties.

However, it is a convenient theory for parents to use as an excuse to not allow children candy, so the theory prevails. Other readers on Reddit also caught on to this fact and pointed out that the ‘sugar high’ is not a real thing.

But the birthday boy still wanted his friend to eat cake on his birthday especially because his mom made it, so the OP’s son did eat it

The OP confronted her friend about her son for making another child misbehave. The friend didn’t think that it was an issue because it wasn’t a health concern or an allergy. She didn’t want to punish her kid for offering cake to his guest on his birthday.

Although the friend promised to pay more attention to it in the future and to ask her husband to do the same, she also agreed to talking about this in a civilized manner with her son and to teach him that he should respect others’ eating habits.

Apparently, the boy had a sugar rush and was cranky all day and his mom wasn’t happy about the birthday boy not respecting her son’s food habits

The OP wanted her friend to punish her son for such a crime, but she refused because she knew it didn’t cause serious health threats

The OP knows that her friend and her husband always allow everything that their son asks for, so she wanted her friend to be a little bit stricter as it concerned her own child too.

Another detail worth mentioning is that there were parents around the boys when they went to eat the cake, so there was no malicious intent and they weren’t doing it in hiding. The mother just wanted to make sure her friend’s son knew it was not right to make other people step over their boundaries. 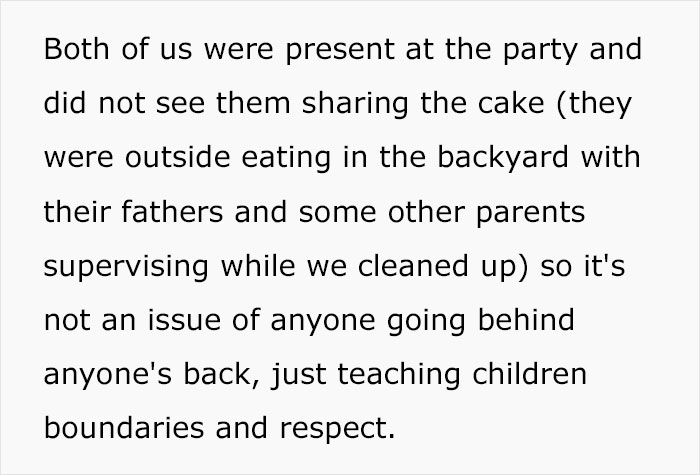 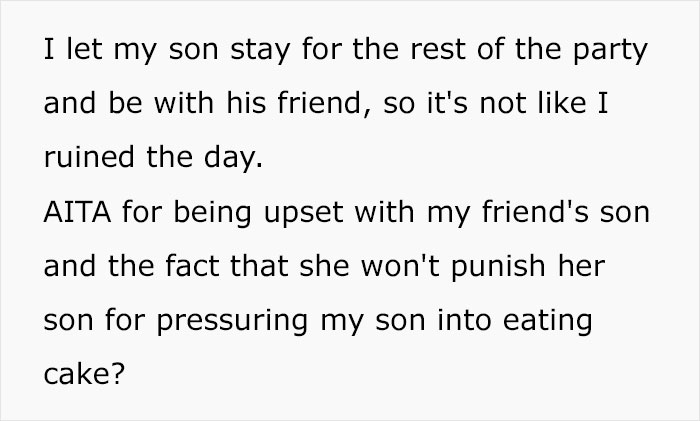 The mom says that she didn’t make a big deal out of it at the party and allowed her son to stay until the end of the party, so she thought she wasn’t ruining the boy’s birthday. But it seems that she has a feeling that she might have overreacted as she was asking the internet if she was wrong for getting upset.

Reddit users in the comments thought that the mom was being too strict and should let her son have candy once in a while, especially at a birthday party. They pointed out that such restrictions actually may result in the kid starting to misbehave and possibly developing eating disorders.

What do you think of the mom’s decision to not let her son eat cake and her reaction to what happened at the birthday party? Do you think her son’s friend shouldn’t have made the boy eat cake when they both knew he wasn’t allowed? Let us know in the comments! 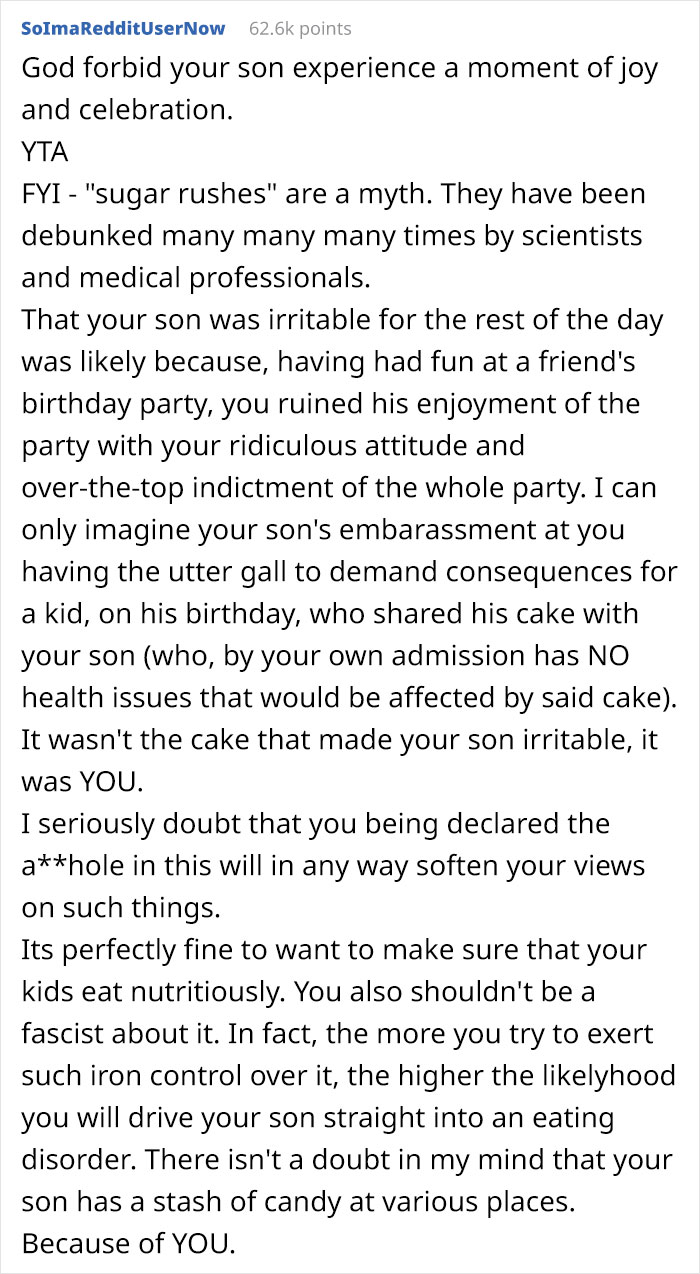 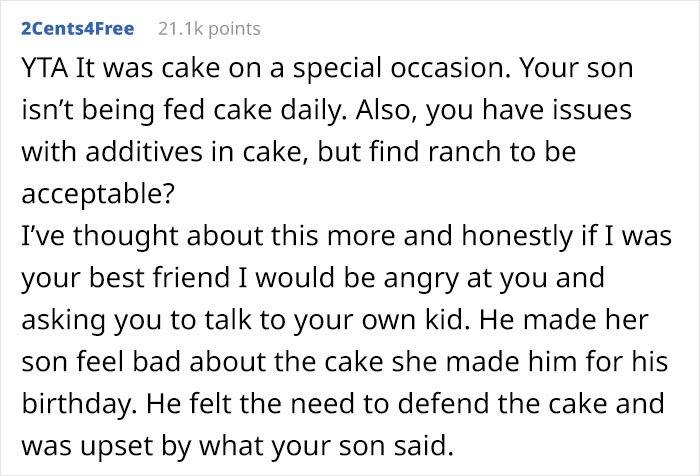 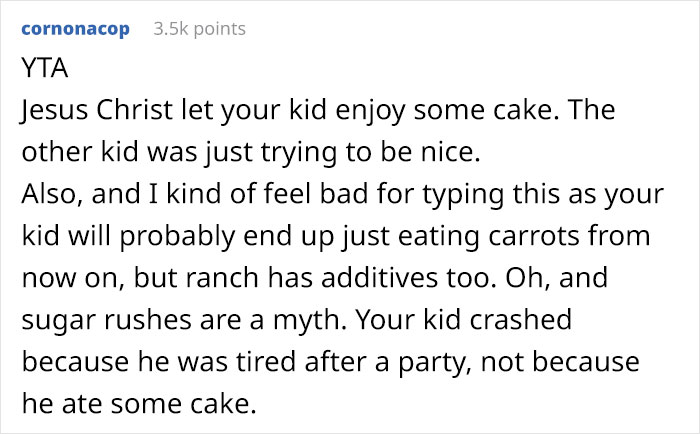 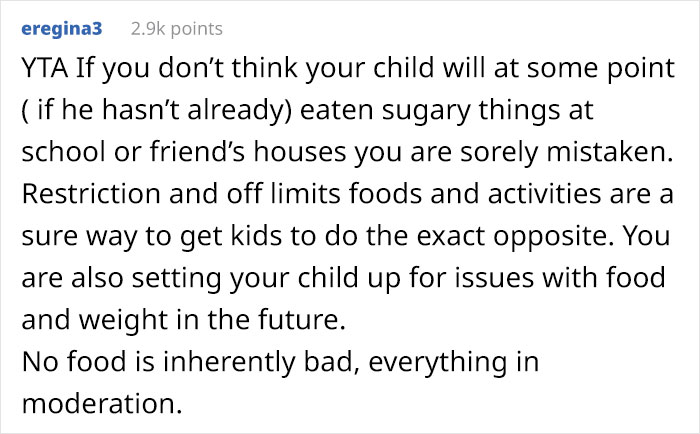 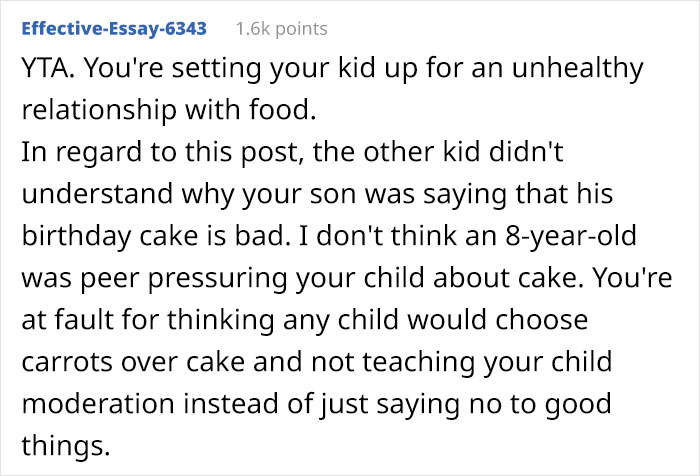