Mom Furious Over Guy Not Giving Up His Airplane Seat Makes Snide Remarks, He Turns To The Internet To Ask Which One Of Them Was In The Wrong

Long flights are exhausting, so when there’s an opportunity to allow yourself more comfort in the air, you take it.

Which is exactly what Reddit user Bratster22 did. For one of his recent trips, the man booked himself a seat with extra legroom.

However, a woman with a baby approached him during boarding and asked if he could swap seats with her husband, forcing the man into an awkward predicament.

Ultimately, he refused. But as time went by and Bratster22 told other people about the incident, he started having doubts about it.

To put it all behind, he told what happened to Reddit’s ‘Am I The [Jerk]?‘ community, asking its 4 million members to be the judge of his actions. Continue scrolling to read the story and let us know what you think about it in the comments. 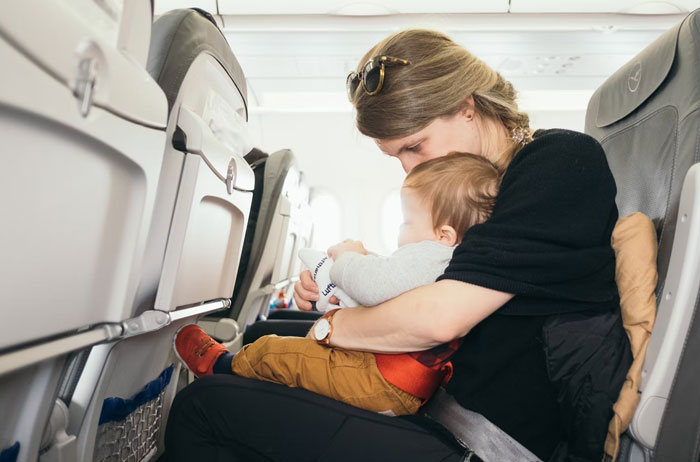 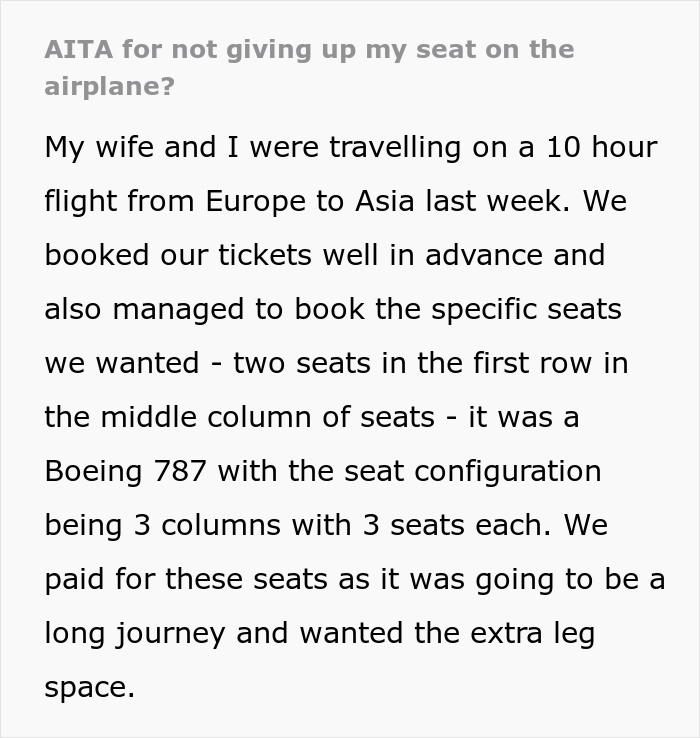 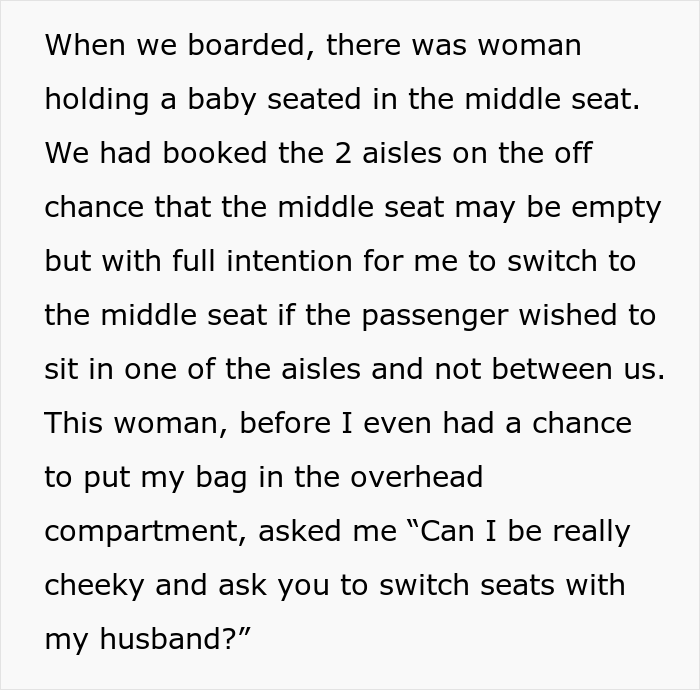 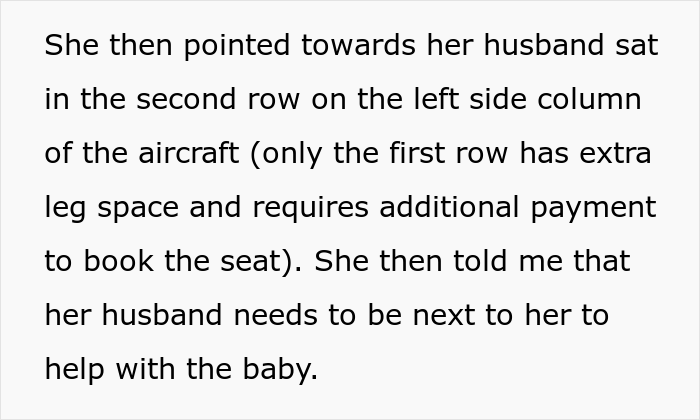 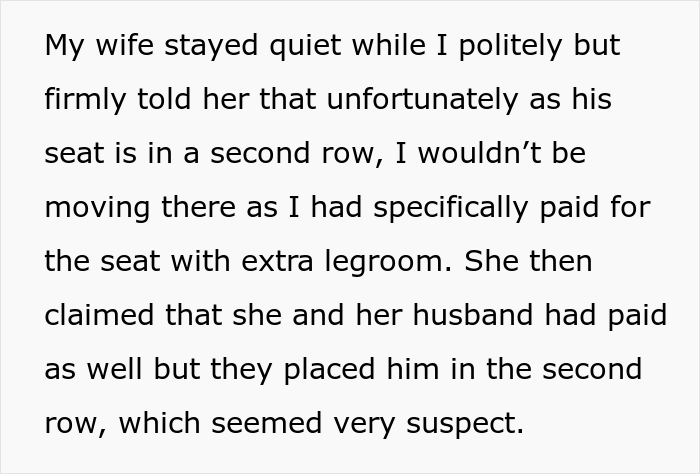 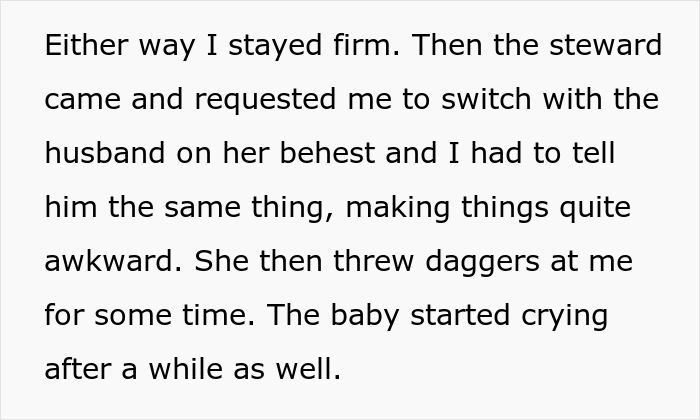 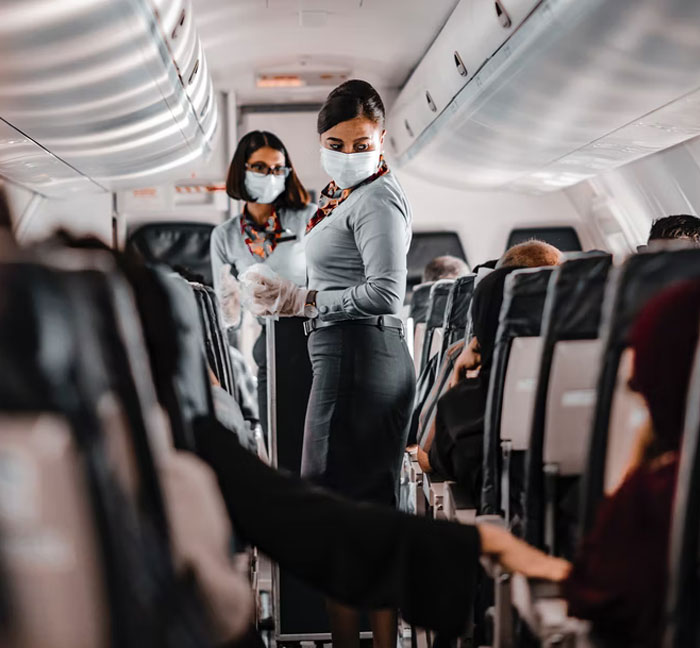 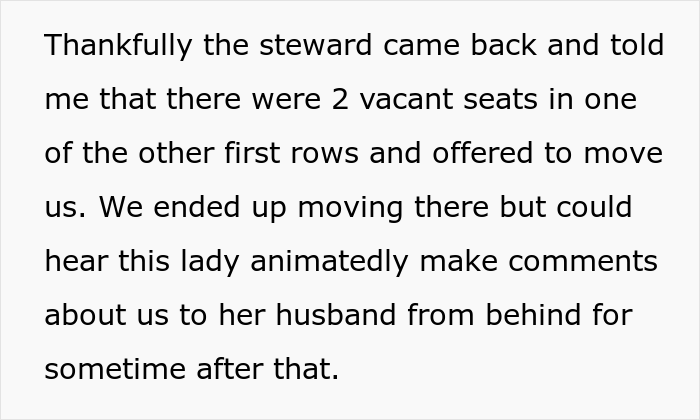 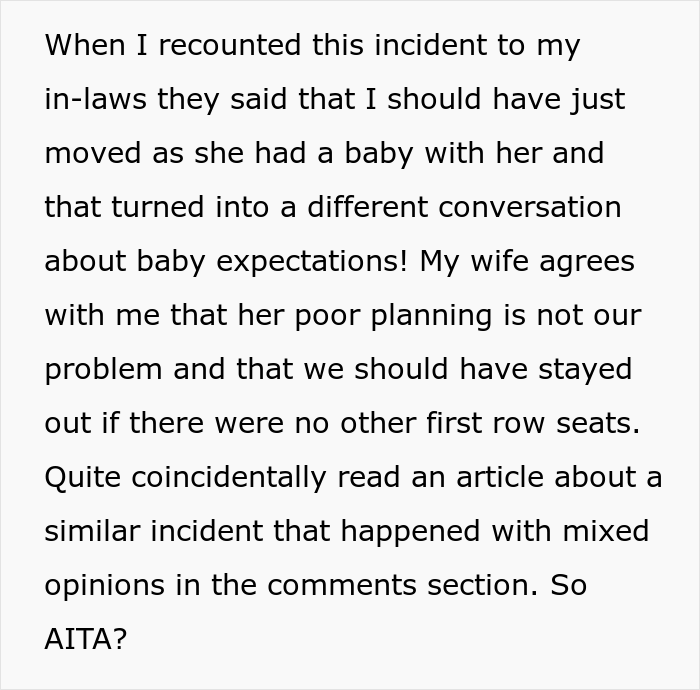 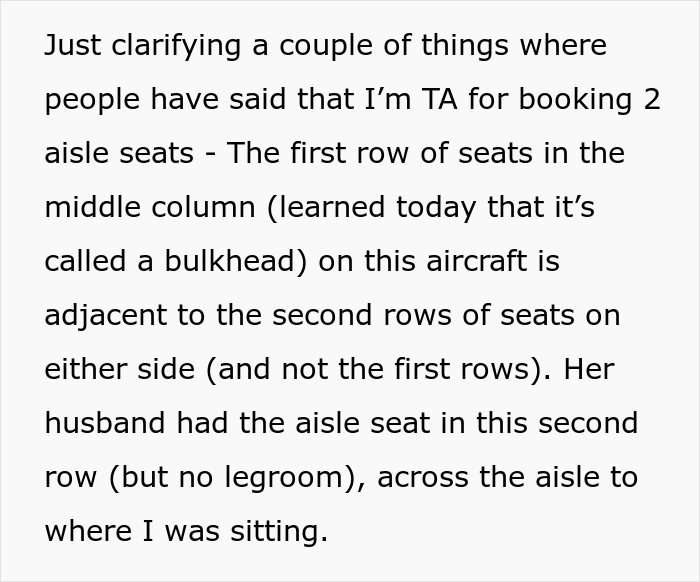 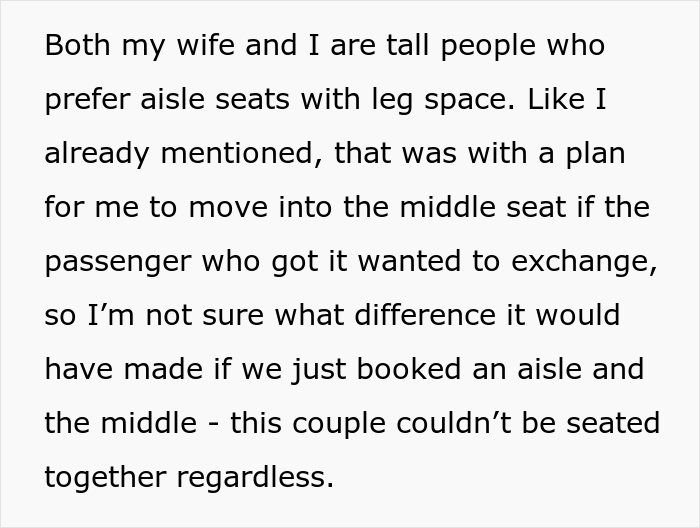 Controversies ignited by airline seating make the headlines regularly. To decode this particular situation, let’s see what Betty Thesky, a flight attendant for a major U.S. airline and author of Betty in the Sky With a Suitcase: Hilarious Stories of Air Travel by the World’s Favorite Flight Attendant, has to say about such conflicts.

“As a passenger, you are perfectly within your rights to ask another passenger to move seats,” she told Reader’s Digest. “Just be aware there is a good possibility they will say no, especially if they will end up with a less desirable (middle) seat.”

But Jacqueline Whitmore, former flight attendant, etiquette expert, and founder of The Protocol School of Palm Beach, explained to the same outlet that it’s one thing if a fellow passenger asks you to swap seats, but something else entirely when a flight attendant asks you to move.

“Flight attendants move passengers for a variety of reasons (families who want to sit together or passengers with short connections are the most common reasons),” Whitmore said.

But according to her, you don’t need to be worried about moving to a seat that’s worse than yours. “If a flight attendant asks you if you will switch seats, try to be as accommodating as possible. You may end up getting an upgrade or a better seat. Flight attendants will do their best to put you in a comparable seat, not a worse seat.”

Of course, when you pay additional money, you have every right to refuse a change that would diminish the value of the product or service that you’re getting.

People thought the man had every right to refuse 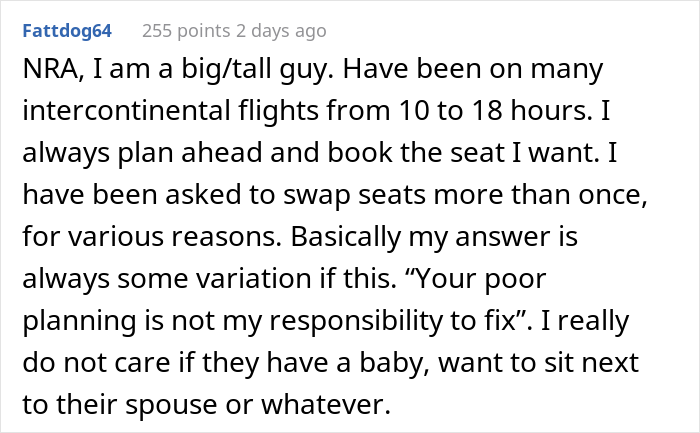 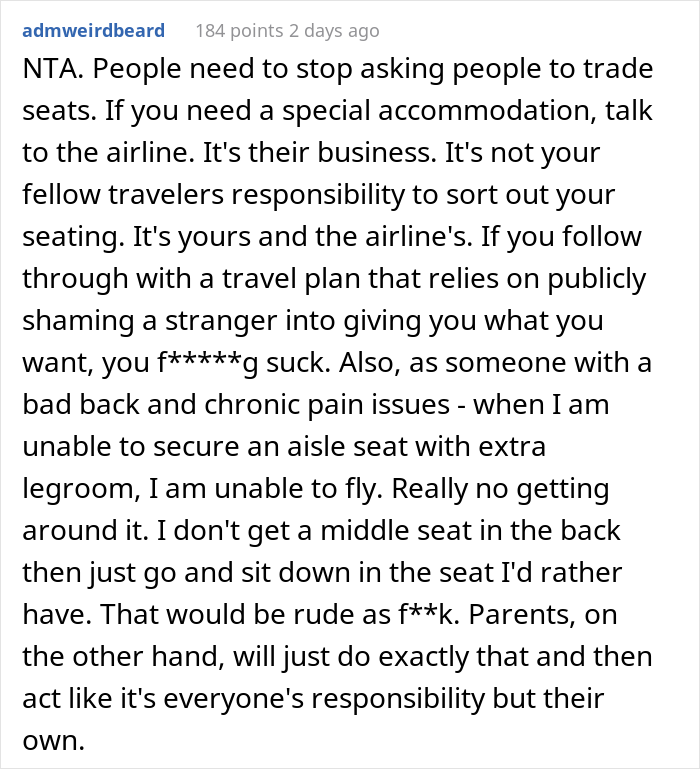 If you end up in the woman’s spot and would like another seat after boarding the plane, Whitmore said the first thing you should do is ask the nearest flight attendant if it’s OK.

If the seat is not a premium seat and does not require more money, it shouldn’t be a problem.

As far as timing goes, Whitmore thinks it’s best to ask flight attendants about swapping your seat before the boarding doors close. But if for some reason you can’t do that, wait until the plane has reached a comfortable cruising altitude.

Of course, you don’t need to involve a flight attendant and can adopt a more do-it-yourself approach. In fact, it often can be the way to go about it.

“If you can handle it on your own, then do so. Most people will swap seats with you if you want to sit with your family,” Whitmore explained. “However, if you want a window seat and the window seat in your row is occupied, then you may ask a flight attendant to find one for you. Keep in mind that this should have been done with the gate agent before you boarded the plane.”

As with most cases in life, use your best judgment! 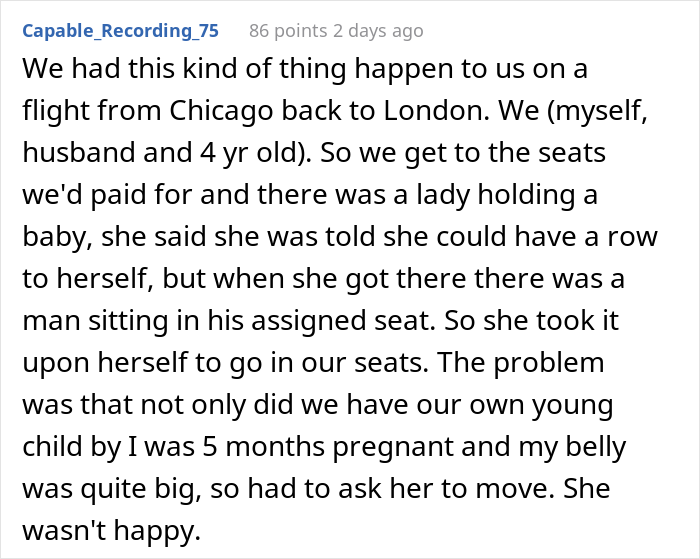