Husband Crushes Wife’s Self-Esteem During Celebratory Dinner, Is Mad After She Up And Leaves

Pregnancy can bring out a range of emotions in both soon-to-be parents, but there’s no excuse for belittling your spouse. Insults are mean and can make anyone upset no matter how you spin them, and Redditor Lillington579 knows this from personal experience. As this 25-year-old woman who is pregnant with her first child writes in her story on the “Am I The As-Hole” subreddit, she recently found herself in a heated argument with her husband after her in-laws hosted a gender reveal party packed with relatives.

You see, the man failed to mention how many people were coming, even when he knew how stressed it makes her feel. Not only that, he decided it was the perfect time and place to make a disrespectful “joke toast” and humiliate his wife in front of his whole family.

As you can guess, this didn’t sit well with the user. “I sat there staring in shock while he kept laughing with them,” she wrote. “I felt so much rage and my anxiety got out of hand.” What followed turned into a marital dispute that took a toll on the relationship. Unsure of her actions, the woman wondered whether she went too far and asked the internet for perspective. Read on for the whole story and tell us what you think about it in the comments.

Recently, this woman stormed out of a gender reveal celebration after her husband made a disrespectful “joke toast” and insulted her in front of his family 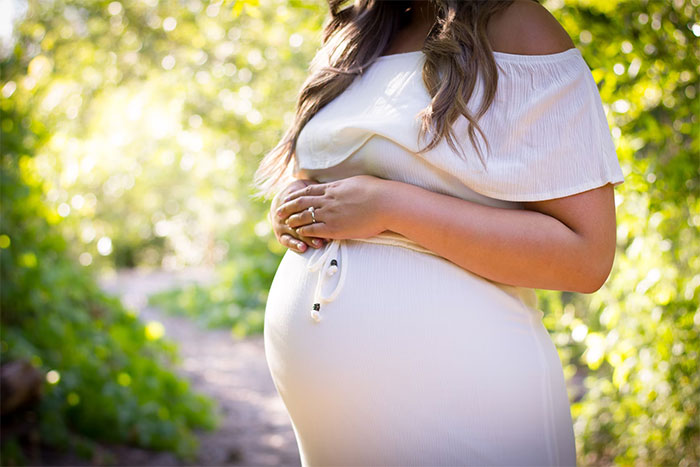 Wondering whether she overreacted, she turned to the internet for guidance 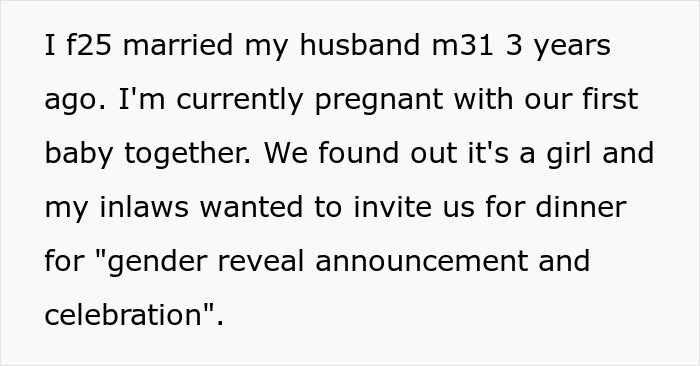 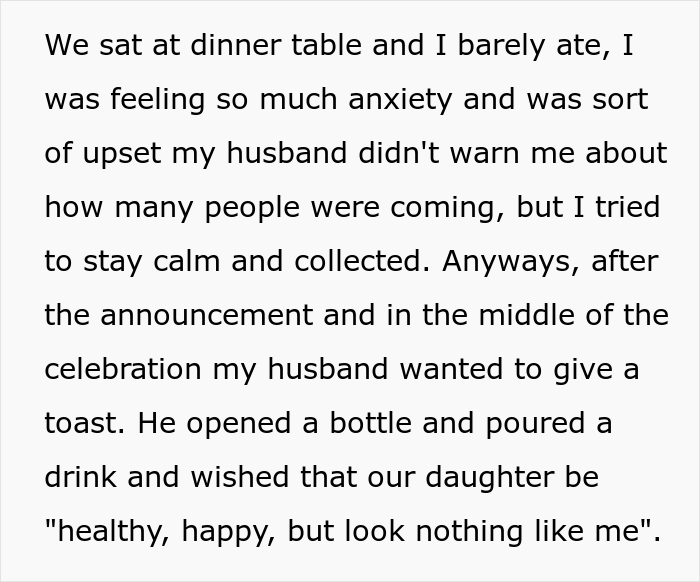 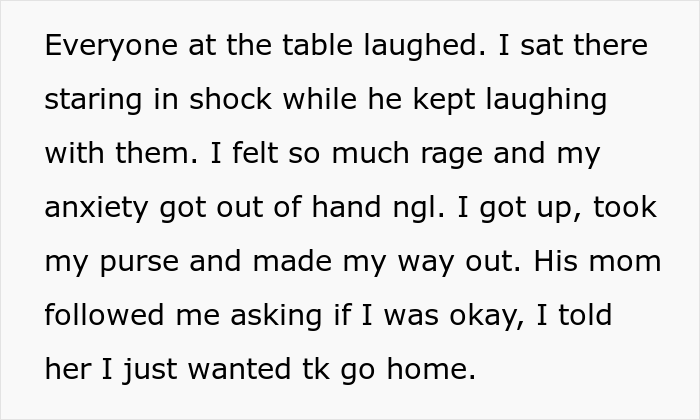 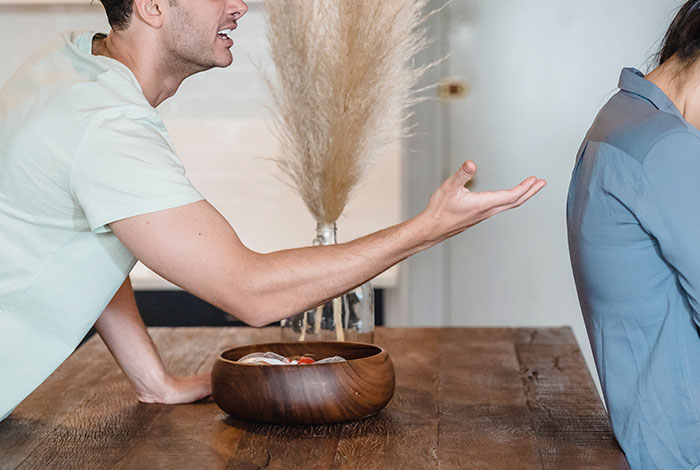 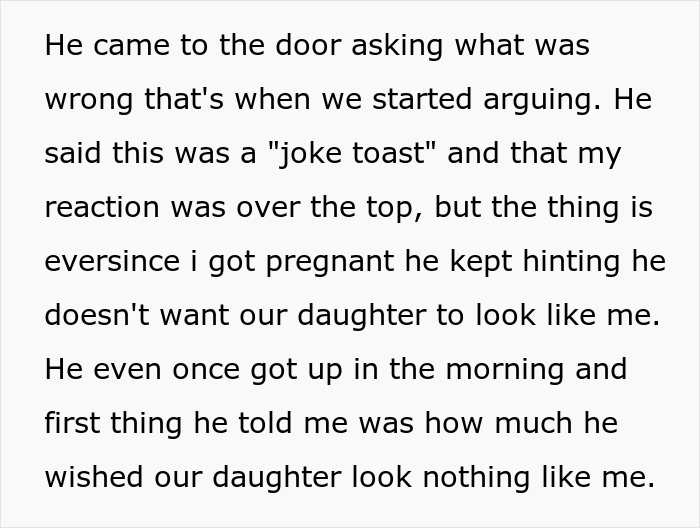 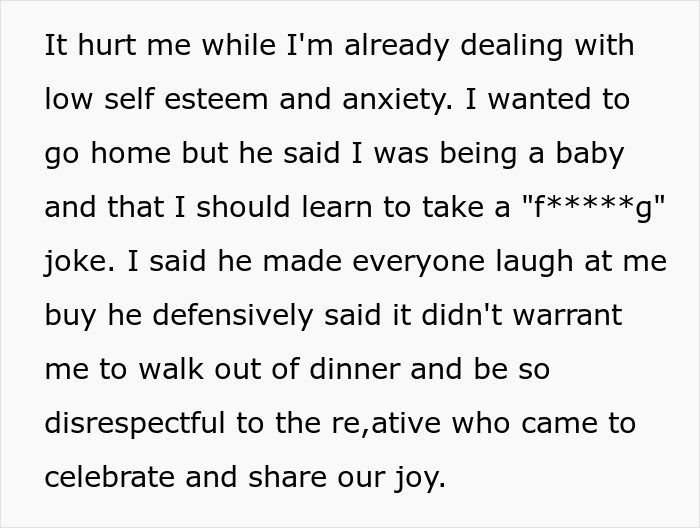 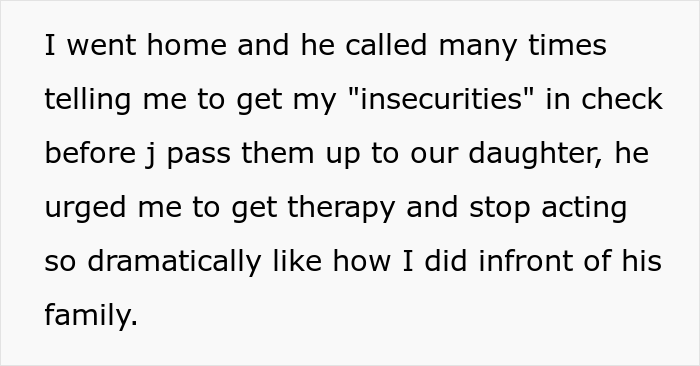 Putting each other down should never be tolerated in a balanced relationship, so it’s no surprise that many members of the AITA community were concerned for the woman. After all, hearing your husband repeat over and over again how he hopes your child will look “nothing like” you is extremely hurtful and far from the healthy and respectful behavior people hope to receive in marriage. The husband seems to go out of his way to erode the woman’s confidence in herself and then brush it off like it’s no big deal. This whole incident shows a hint of gaslighting, a kind of manipulation tactic by psychological means that leads people to question their reality, and it’s considered to be a big glaring red flag in any partnership.

We previously had a chat with relationship coach Marta, founder of MyCoachMarta, about insensitive remarks from our partners and how they affect our wellbeing. She explained that many women are subjected to discrimination and psychological abuse at home. However, their affection for the person can blind them and make them overlook or even ignore these unhealthy relationship patterns. “Sadly, they often fail to recognize it over time and instead question their own sanity,” she told Bored Panda.

When our loved ones act inappropriately, are constantly belittling us and throwing insults our way, it leaves us concerned and unsure of what to think of their actions. To better understand their motivations, it’s important to confront them about their actions. However, when they seem unable to apologize or even respond to our words with a harsher reaction, that is a huge warning sign for gaslighting, “a cruel and often covert kind of emotional manipulation in toxic relationship dynamics,” Marta explained.

According to the relationship coach, hurtful remarks have “no place in a healthy relationship. This type of behavior is triggering, so it’s difficult to respond appropriately in a heated moment. Short responses and avoiding heated disputes are the best reactions because gaslighters thrive on defensive behaviors and it fosters further gaslighting with comments like ‘you’re too sensitive.’”

She added that “women sometimes cease seeing gaslighting like this in relationships where it is prevalent, and it continues to erode their self-esteem, confidence, and takes a toll on their mental health.” But once you do notice these signs, Marta suggested it’s best to contact a relationship therapist or coach, or at the very least a trusted friend. An unbiased observer could assist in “gaining perspective and seeing the relationship for what it is, and either support the couple in developing a healthier dynamic or assist the wife in leaving a toxic situation.”

The vast majority of Redditors sided with the user, here’s what they had to say 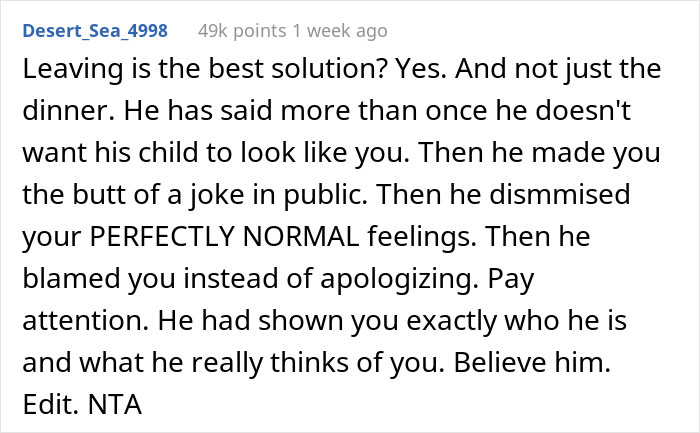 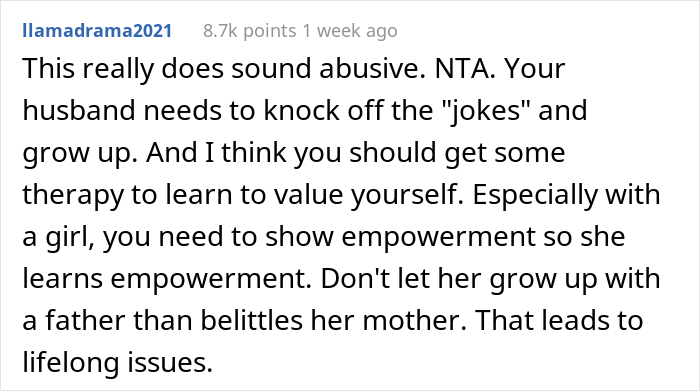 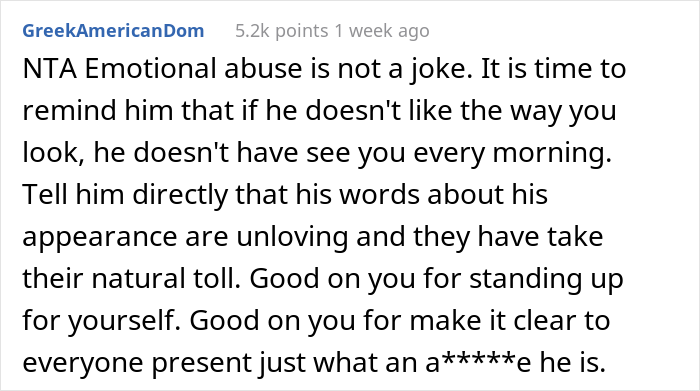 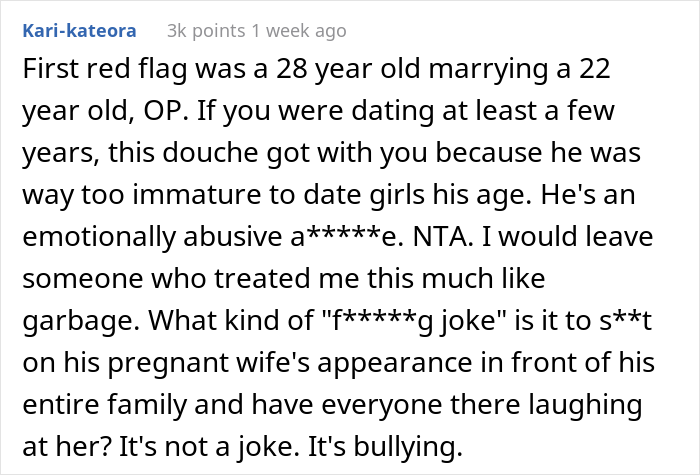 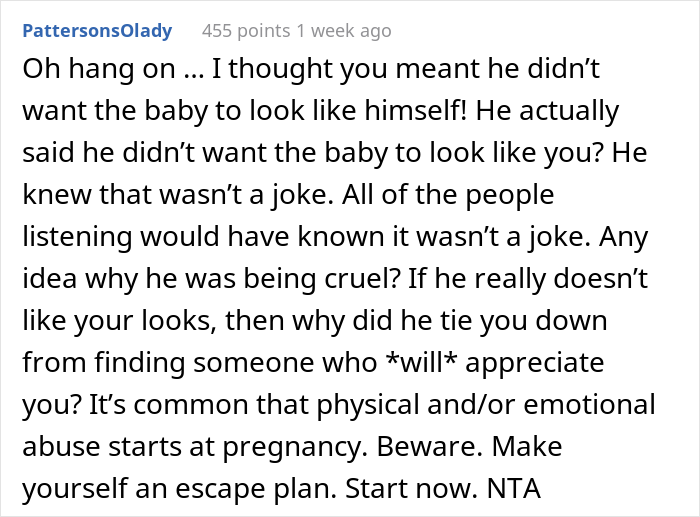 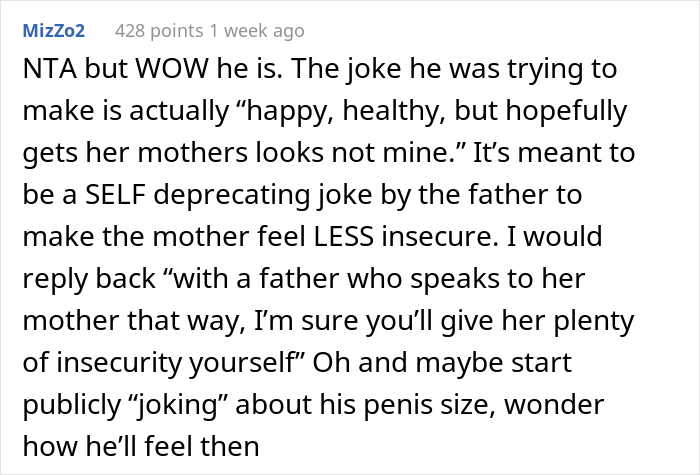 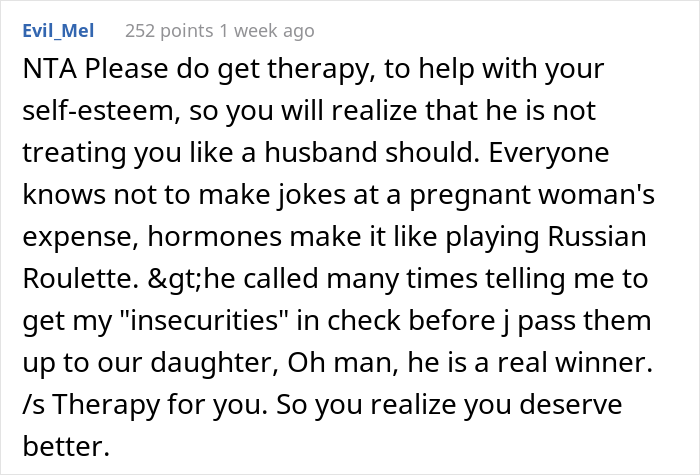 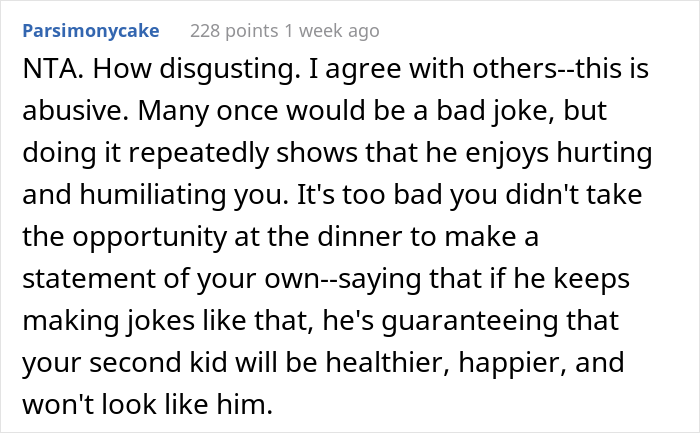 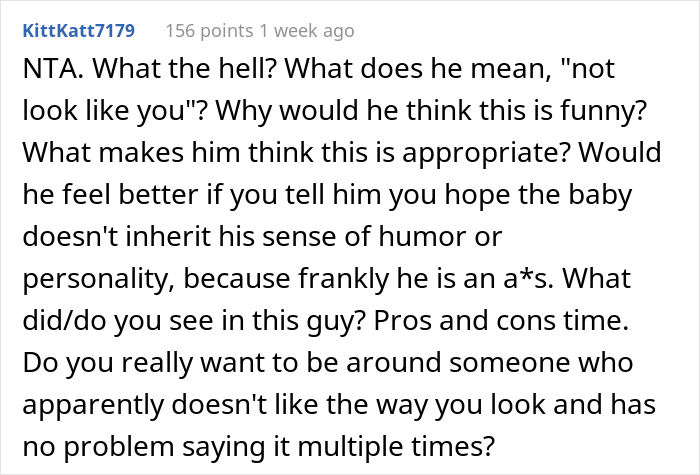 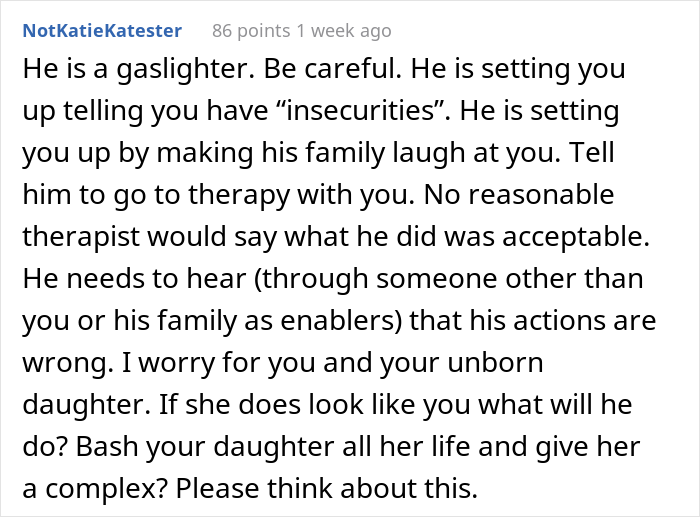