After Gerald Levert passed away in November of 2006 from an accidental overdose of prescription meds and over-the-counter meds, everyone was wondering how Eddie, who was extremely close to his son, would be able to go on. But 14 months later in March of 2008, the unthinkable happened when Eddie’s other son, Sean Levert, died from withdrawals from the anxiety med, Xanax, while in police custody for non-payments of child support. After that, friends and fans alike became even more concerned about how Eddie and his ex-wife, Martha, (Sean and Gerald’s mom) would be able to keep on keeping on.
A few years ago, Eddie opened up to The Plain Dealer and Ebony about how he’s been coping with Gerald and Sean’s death. He also manned up and willingly admitted where he feels he went wrong as a father to them. Here are excerpts from those interviews.

On his sons’ untimely deaths 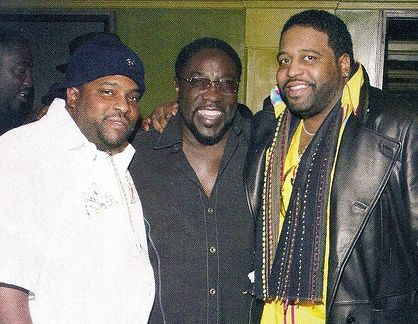 Eddie Levert: “If it wasn’t supposed to be, it wouldn’t have happened. I wish I could tell you that I had a sense of why, but I don’t. I still wonder: Was it something I did? Maybe that’s why I’ve made so many changes in my life, to better myself and try to be a better father, a better husband, a better friend. Maybe that’s the reason why: for me to come to a better place. But I can’t dwell on it. It becomes very emotional for me. It gets to a place where . . . [he pauses and his voice cracks] … I really miss them. It’s just hard. But I can’t get caught up in the fact that it wasn’t supposed to be like this, because it happened. -The PlainDealer

How He Copes
During his process of grieving, Eddie credits his religious faith with helping him to cope with his heartache:

Via TPD: “I read the Book of Job. He lost everything. I didn’t lose everything. I lost two sons. It’s not trivial. But compared to somebody who lost their whole family — do you understand? — I was left something. God is still great. I kept praying to God, and God kept giving me strength. I had days when I blubbered like a baby, just crying. I still have those moments. But I have a purpose now.”

The music and memories Eddie has of performing with his sons, are what ultimately get him through day by day:

“The music has always been healing. With Gerald and Sean, the times we had together onstage are some of the greatest moments of my life, man. The times that I was onstage with them doing ‘Casanova’ or ‘Baby Hold on to Me’ or ‘Wind Beneath My Wings’ — to me, those are priceless.

On His Regrets
Eddie admitted his personal struggles when raising his two sons bak in the day:

“When Gerald and Sean passed away, I wanted to really blame myself because I felt like it was some things I could’ve kept them from seeing that I did in my life, as a father. You know what I’m saying? People say, ‘You’re a great dad,’ and all of that, but I’m a person, too, you know?

I used to take them on the road with me, because it was my wife’s chance to get her break. I’d take the kids for the summer and she’d be able to get off into her ministry as being one of Jehovah’s witnesses. She was a great woman; she just had a rotten man. You know? And I can speak of that guy as being a rotten man because he didn’t know what he had and he didn’t know who he was or what he should’ve been doing. It was ignorance. I had to learn. [Ebony]

Sean and Gerald have unfortunately transitioned on, but they have left their father with one of the greatest gifts anyone could ask for- the gift of wisdom.