“Dog Mom” Vents About Being Excluded From Mother’s Day Outing, Throws A Tantrum When Friend Tries To Explain That It’s Not The Same As Having Children

Animals are definitely one of the best things in our lives. Pretty much the same as kids. Some people, however, believe that they are the same, although, of course, things are much more complicated with children – and most parents are well aware of this.

But still, there is a category of people who are so fond of their wonderful doggos that they even identify with the nickname “dog dads” or “dog moms”. One of these women will be discussed in our story.

More specifically, the Original Poster in the AITA Reddit community was a longtime friend of one of these “dog moms” and the post has so far racked up over 3.5K upvotes, as well as 625 different comments. Most of the commenters supported the OP… however, let’s go in order. 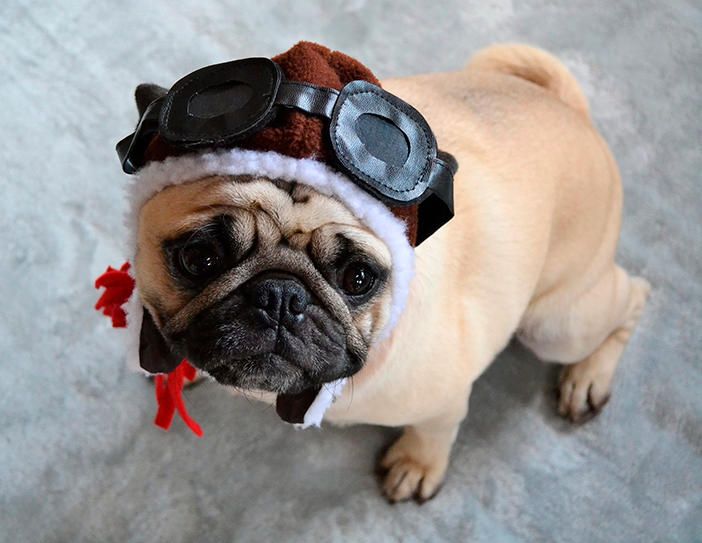 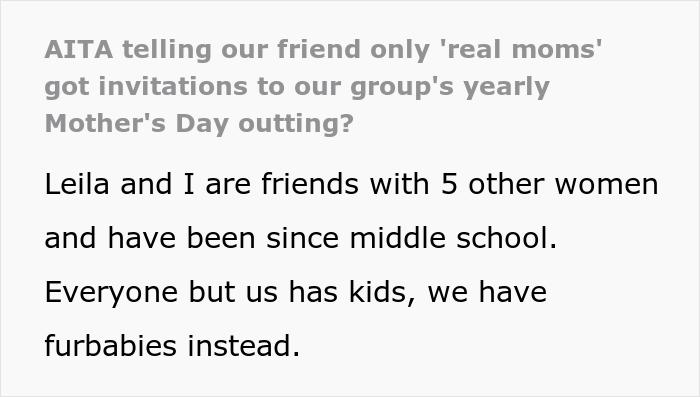 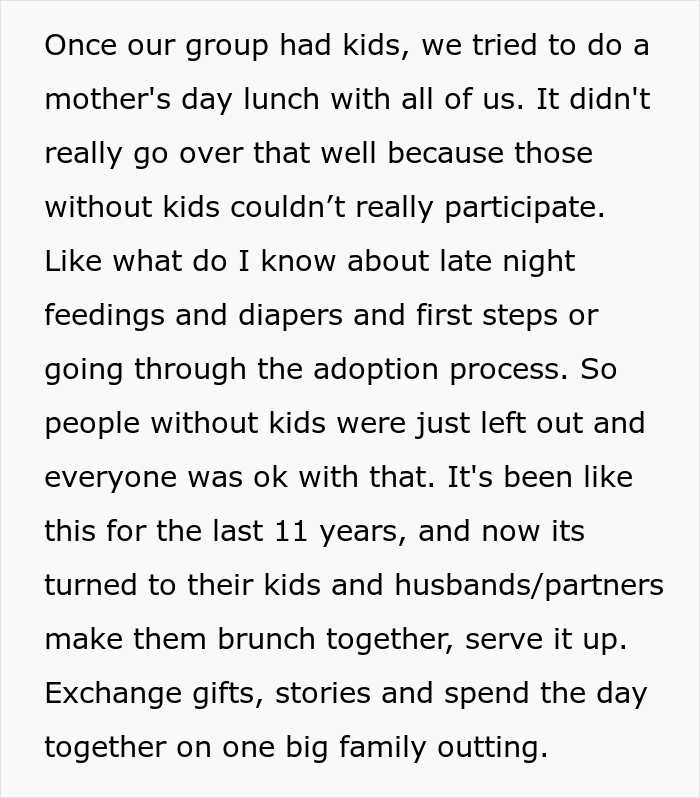 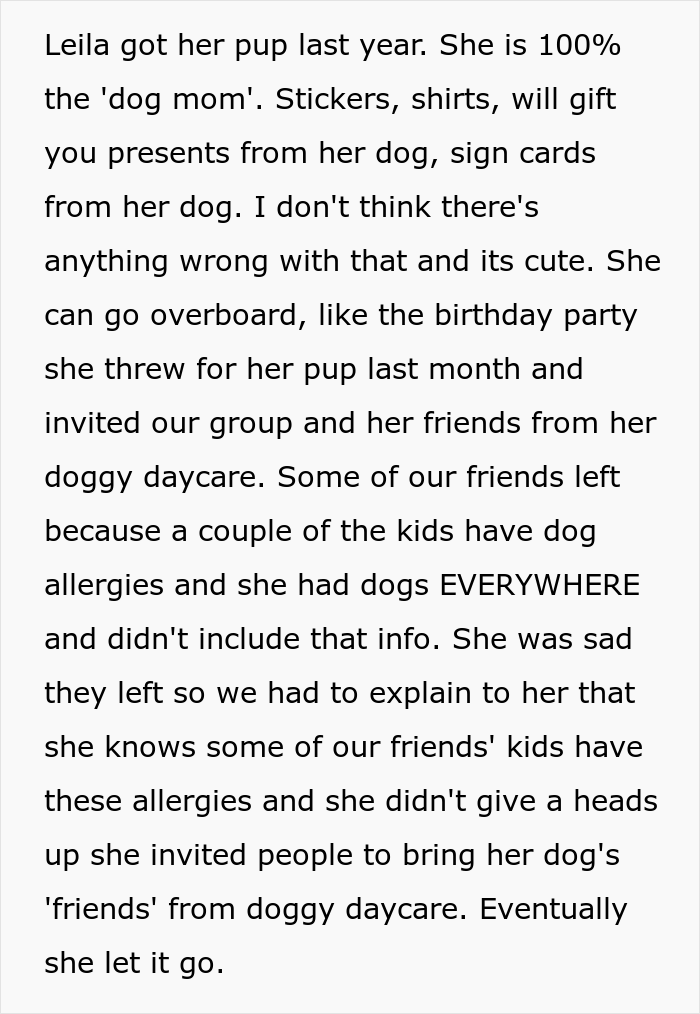 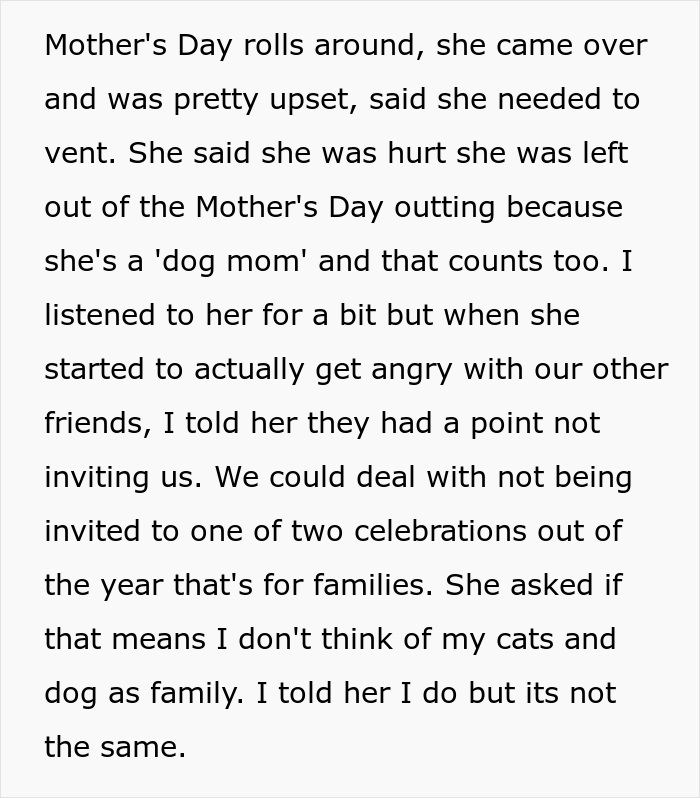 The friends have been holding parties on Mother’s Day for many years
On Mother’s Day their group usually has a party – although the OP didn’t particularly like to participate, as her friends with children mostly discussed their offspring and various things related to them, while the OP was not very familiar with diapers, night feedings, first steps and so on.

But she still took part in these meetings – and this went on for many years, until the children grew up, and the parents began to gather for outings with husbands and parents like one big friendly family. 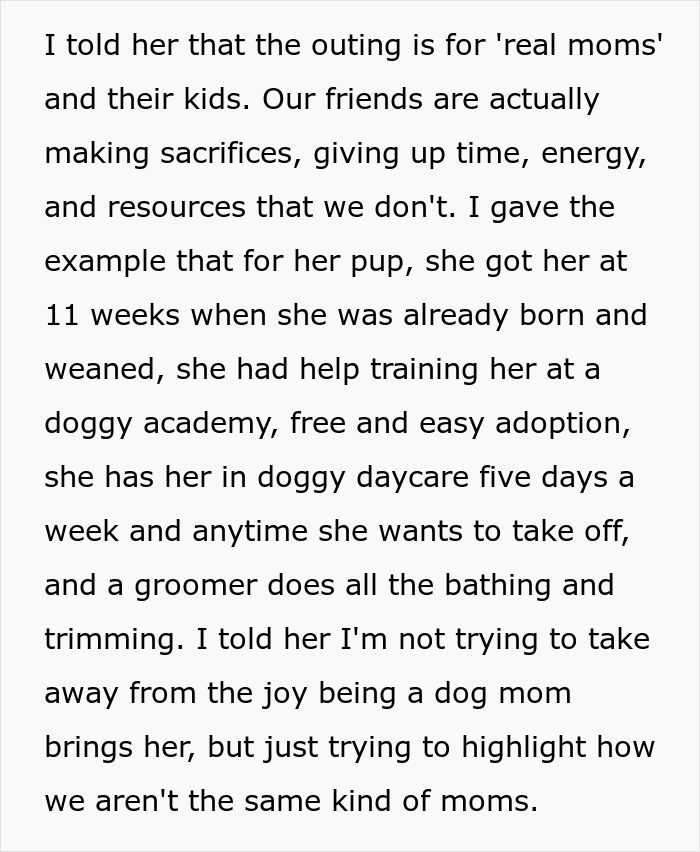 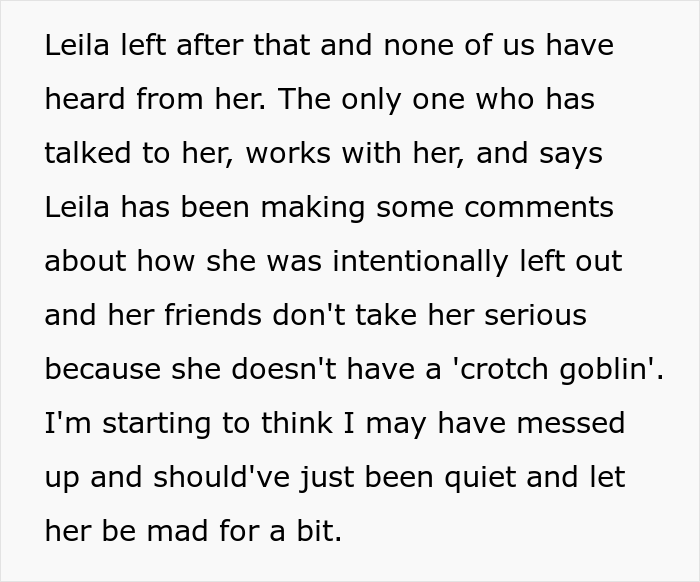 Leila always treated her doggo called Lemon like a real child
But Leila eventually became a real “dog mom”. She decided to stay childfree in her youth, and shortly before that, she divorced her husband because he had changed his point of view about having children. And then Leila got a wonderful doggo named Lemon. She spoiled him in every possible way, dressed him up in beautiful clothes – and generally treated him like a baby.

For example, she sent greeting cards on his behalf, threw him birthday parties – and emphasized that she was also a mother. Everything was fine and calm until the time of the next Mother’s Day came. 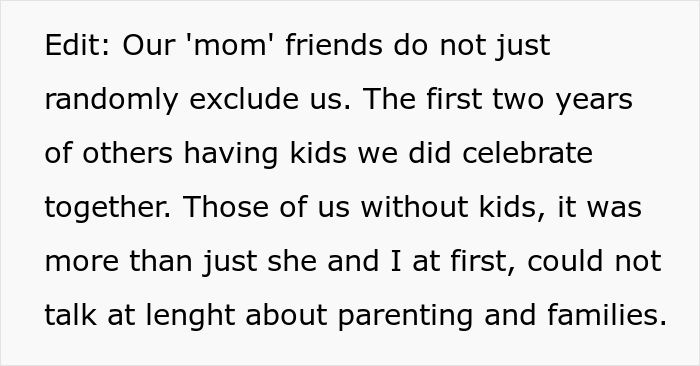 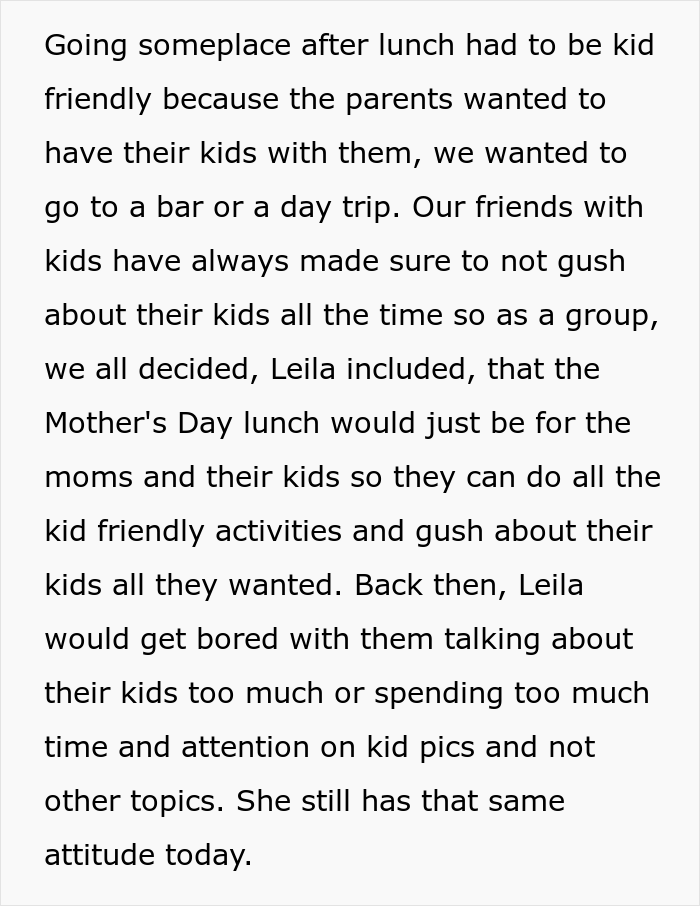 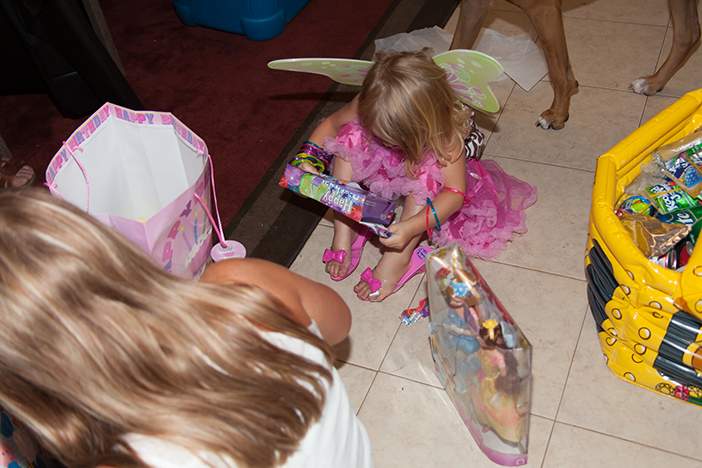 The friends decided not to invite the OP and Leila for their Mother’s Day outing as they mostly discussed kids
This time the friends from the group who had children decided not to invite OP and Leila, simply because they were not always so interested in discussing various children’s issues. The OP took it calmly and with understanding, but Leila was immediately offended.

The OP tried to explain that even though she is a “dog mom”, raising a child is still not comparable to keeping a dog. After all, she adopted the puppy when he was already 11 weeks old, specialists help with training and grooming, and in general, the cat-loving OP and Leila are not quite the same kind of moms.

But Leila just turned around and left, and none of her friends heard from her again. Only one of them, who worked with her, heard the woman making some comments about how she was intentionally left out and her friends don’t take her seriously because she doesn’t have a ‘crotch goblin’. In general, the OP began to doubt whether she was right or wrong and whether she was talking appropriately with her friend. 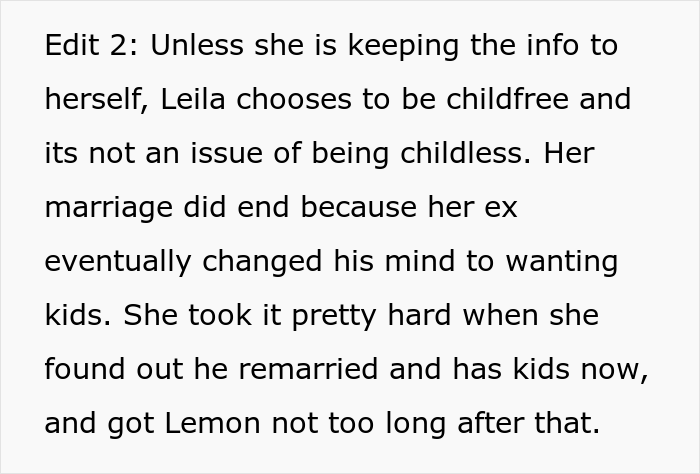 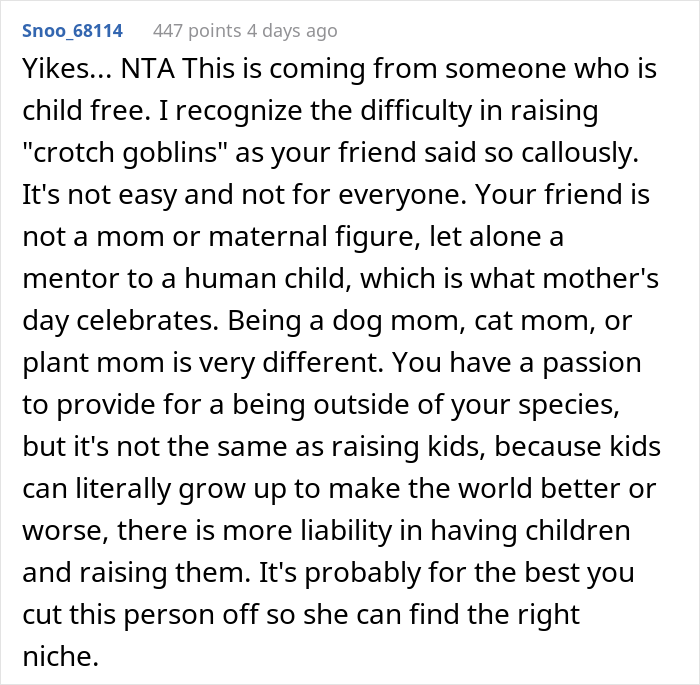 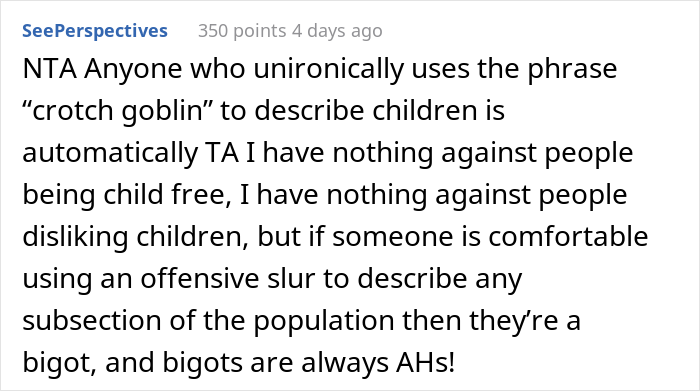 Being childfree is fantastic, but don’t relate yourself to Mother’s Day just because dogs aren’t kids, another commenter stated. And actually, anyone who unironically uses the phrase ‘crotch goblin’ to describe children is automatically TA – that was another opinion. And some of the commenters advised Leila just to celebrate Pet Parent Day, which, by the way, falls on the last Sunday of April. 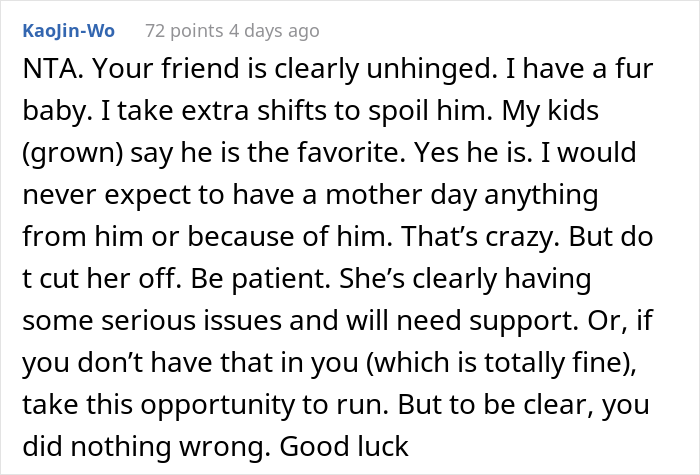