Bobby Brown is currently promoting the releases of his upcoming A&E 2-part docuseries, “Biography: Bobby Brown” and his reality show, “Bobby Brown: Every Little Step.” While doing so, he’s sharing a very transparent glimpse into the excruciating heartache he’s been dealing with behind the scenes in the years since his ex-wife of 15 years, Whitney Houston; their daughter, Bobbi Kristina; and his son, Bobby Brown Jr. (from his previous relationship with Kim Ward) passed away. All three of the aforementioned loves of his life died due to complications from dr-ug overdoses.

As you all know, Whitney died in February 2012, following a dr-ug overdose. Bobby has made it no secret that he, too, has battled with dr-ug addiction, but he says he’s now living a sober life. That’s the type of life he now regrets not being able to help Whitney reach. In fact, Bobby feels that if he were still married to Whitney, she would still be alive today. 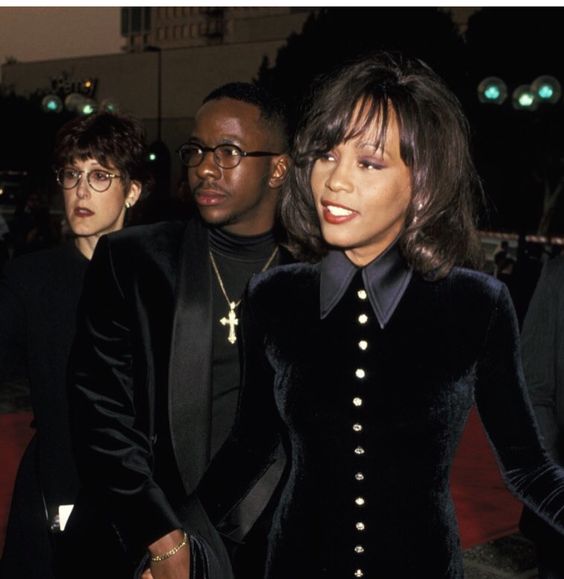 In one particularly emotional video clip, shared by Daily Mail, Bobby allowed cameras to follow him as he built up the courage to visit both Whitney’s; and their daughter, Bobbi Kristina’s, side-by-side graves for the first time at a New Jersey cemetery. As he grieved for both of them, that’s also where he made his confession about Whitney:

“We had made our beds and had to lie in them. We always felt that our love was strong enough to overcome any obstacle put in front of us. … We would still be together if it wasn’t for dr-ugs. Dr-ugs got the best of us.”

Although Bobby’s and Whitney’s 15-year marriage was plagued with rumors of chea-ting, dr-ug abu-se, and hostility…it was also very obvious that the two R&B legends truly loved each other. Unfortunately, sometimes love can only carry a relationship but so far…and by 2006, Whitney was finally ready to throw in the towel, filing for divorce that year. By 2007, their divorce was finalized.

The weight of grief Bobby has been carrying is astronomical. Not only did he lose Whitney in Feb. 2012; his mother, Carole Brown, died a month earlier in January 2012 — a year after his father, Herbert Brown, died in 2011. Then came even greater grief…to lose two of his children within a five-year span — Bobbi Kristina in 2015, and Bobby Brown Jr. in 2020 — is unimaginable. Hopefully, Bobby’s willingness to publicly speak about his grief and regrets has been somewhat therapeutic for him.

Bobby Brown’s docuseries, “Biography: Bobby Brown”, and reality show, “Bobby Brown: Every Little Step,” will air on A&E in the end of May 2022.