The Johnny Depp and Amber Heard trial is in its fifth week and people are invested in what’s happening more than ever as it was Heard’s turn to give her testimony. She just finished after being questioned for four days by both her own lawyer, Elaine Bredehoft, and Depp’s attorney Camille Vasquez.

Some people memorized bits of the testimony and quoted them to make fun of Heard because of how ridiculous they sound, while others are disgusted by the clear lies the woman tells and by her being disrespectful to real abuse victims. We combed through the internet to collect the best reactions people had in order to sum up the most important things that came from Heard’s testimony and what is the public’s opinion on it. 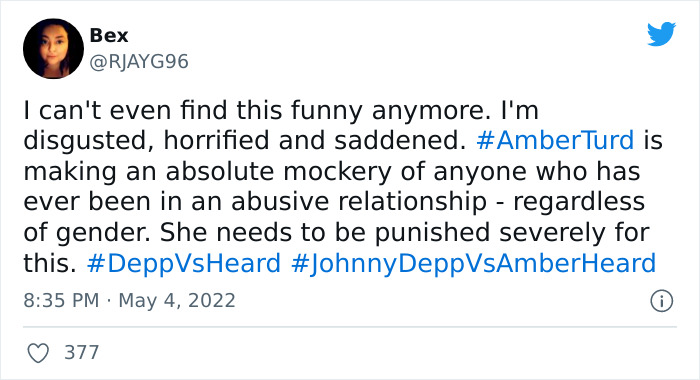 Johnny Depp sued Amber Heard over an op-ed she wrote for Washington Post in 2018 in which she called herself “a public figure representing domestic abuse” which was seen as a clear reference to her ex-husband by his lawyers as she accused him of being violent in their marriage during their divorce process. Amber Heard’s words damaged Depp’s career so he seeks to clear his name with this defamation lawsuit.

The lawsuit started on April 11 of this year and among all of the 120 people who were invited to be witnesses in this case, the most important ones are the ex-spouses, Johnny Depp and Amber Heard. Depp finished his testimony on April 25 and Bored Panda made a post on the reactions people had then that you can find here. And on May 17, Amber Heard also finished telling her side of the story.

We can only guess what the jury thinks about what is happening, but what is for sure is that one of the tw will have to face cncequences. We reached out to Peter L. Tragos, a Partner at the Law Offices of Tragos, Sartes & Tragos in Clearwater who also has a YouTube channel where he and his colleagues comment on the trial.

We wanted to find out what these consequences could be. He explained to us, “Defamation is a civil claim and only carries with it monetary remedies. Only the government can take away someone’s liberty and enforce a jail sentence through criminal charges. The only way someone ends up in jail in a civil action is if the judge holds them in contempt for certain bad behavior and I don’t expect that to happen in this case.” 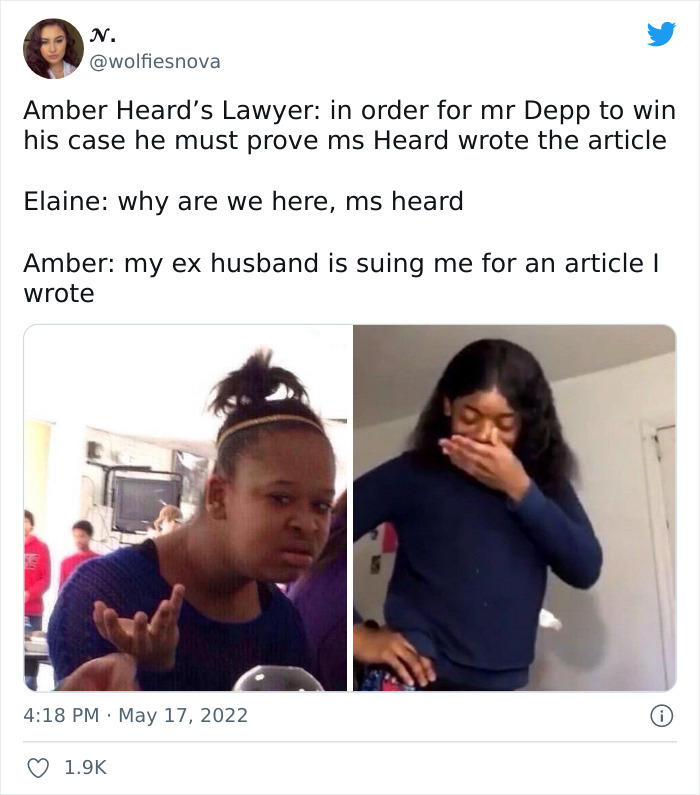 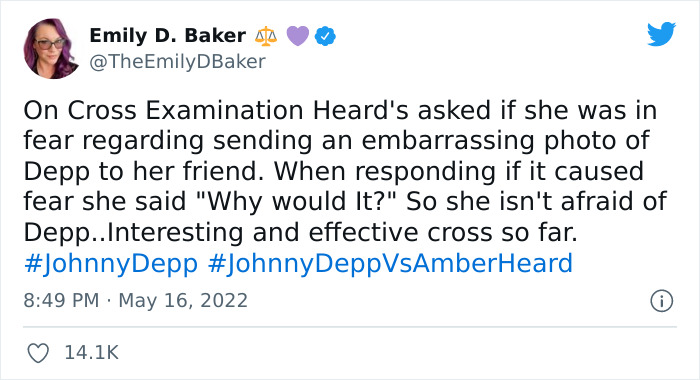 As Johnny Depp finished his testimony, he claimed that he was the one who experienced abuse, so the audio in which the actress is heard saying “You’re fine. I did not hurt you. I did not punch you. I was hitting you” was addressed. Amber Heard explained, “I’m talking about the difference between a punch, which Johnny did often, and me having to hit him in my defense.”

When Depp’s lawyer showed a photo that should have been evidence of Heard being abusive towards him as it showed dark bruises under his eye and a swelling nose that was taken on the couple’s honeymoon in 2015, the woman’s response was, “I’ve seen this picture before, and he’s not injured in it. This one is photoshopped.”

Heard kept repeating that she was always scared of what her ex-husband could do to her and that she believed he might kill her, even if it was unintentionally. So it was very peculiar to hear her response when she was asked if she wasn’t afraid of sending pictures she took of Depp sleeping passed out to her friends as he might have been mad about it.

The lawyer asked, “You weren’t afraid that opiate Johnny or ‘the monster’ as you called him, would get upset that you sent this picture to your friend?“ Heard replied that she believed the photo would have upset Depp and that truly was scary, but when the lawyer then reformulated her question to “But it didn’t stop you from sending this picture to your friend, did it?” the woman’s response was “Why would it?” 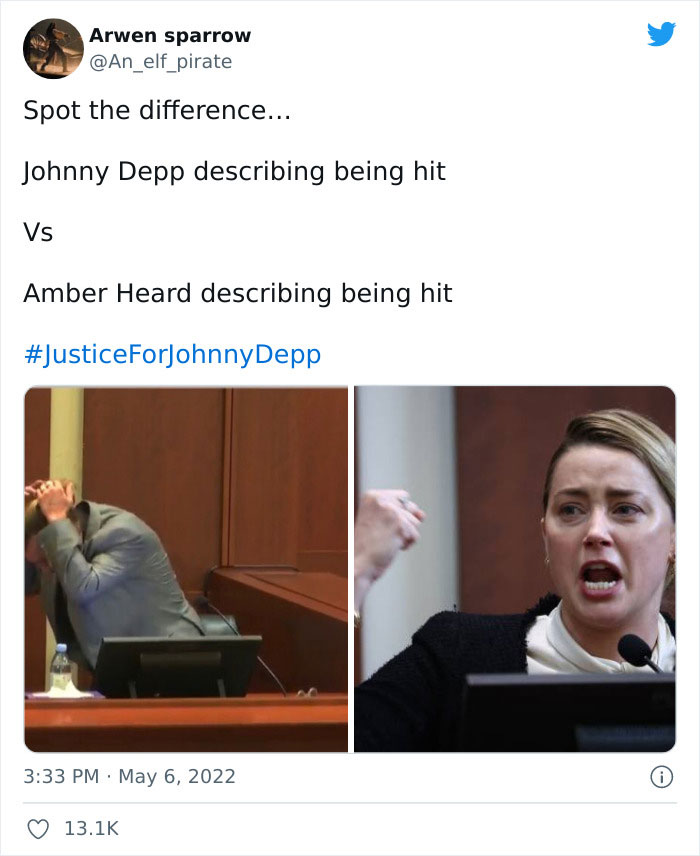 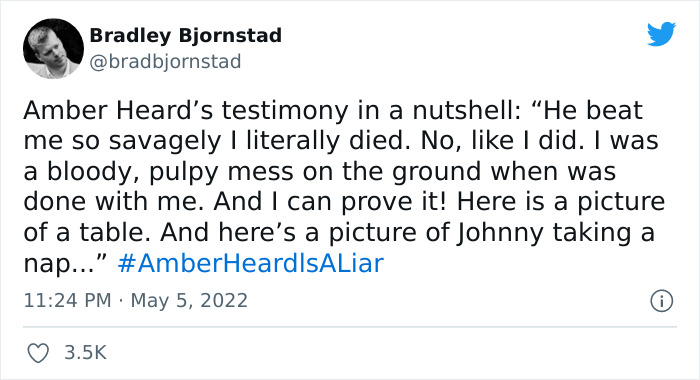 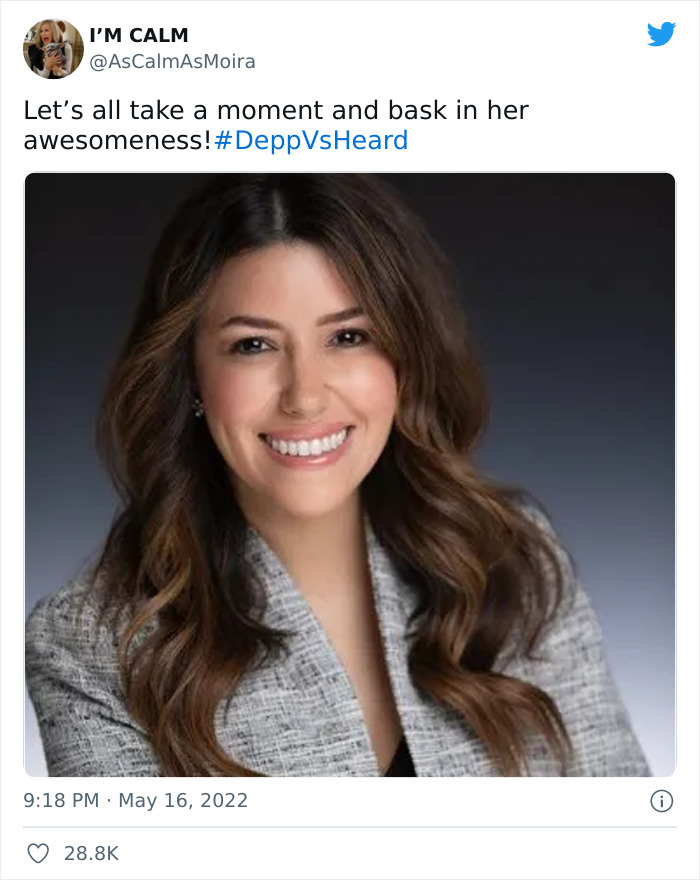 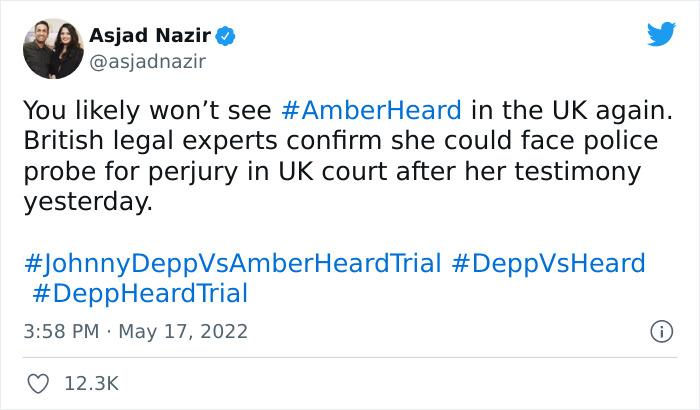 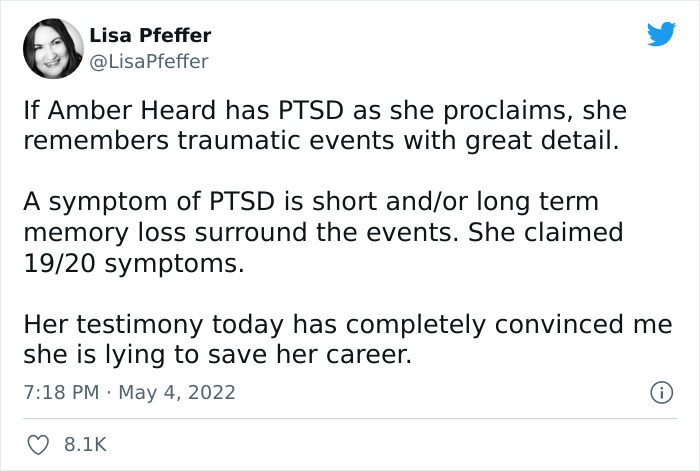 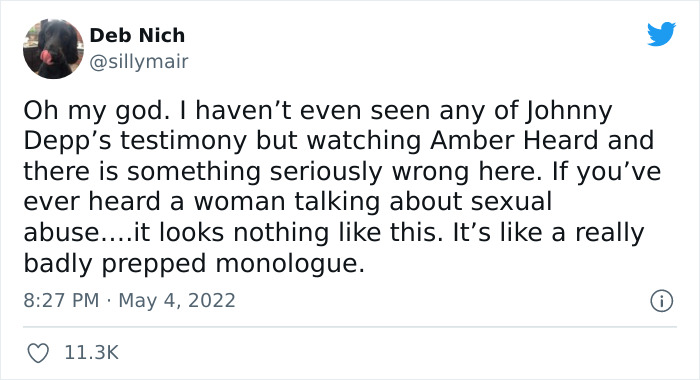 However, all of these things that Heard said weren’t convincing enough to the people who follow the trial. People online mocked her facial expressions that didn’t match up with the emotions she was supposedly experiencing, they were pointing out all the irrelevant information she was giving and how illogical her stories sounded by trying to reenact the events, according to her words said during the trial.

Peter Tragos has a theory why Heard might overshare, “I actually think these details are a way Ms. Heard believes will prove she is telling the truth. At one point in her testimony, she said “why would I add these details if I was lying” or something to that effect. Less detail would be easier, and she is right, but more detail doesn’t make it true on its own.”

Despite her effort, it sems that people more and more believe that every word Heard says is a lie, especially after people started remembering what one of Depp’s witnesses, Dr. Shannon Curry, said about Heard possibly having borderline and histrionic personality disorders and accurately predicting her behavior. 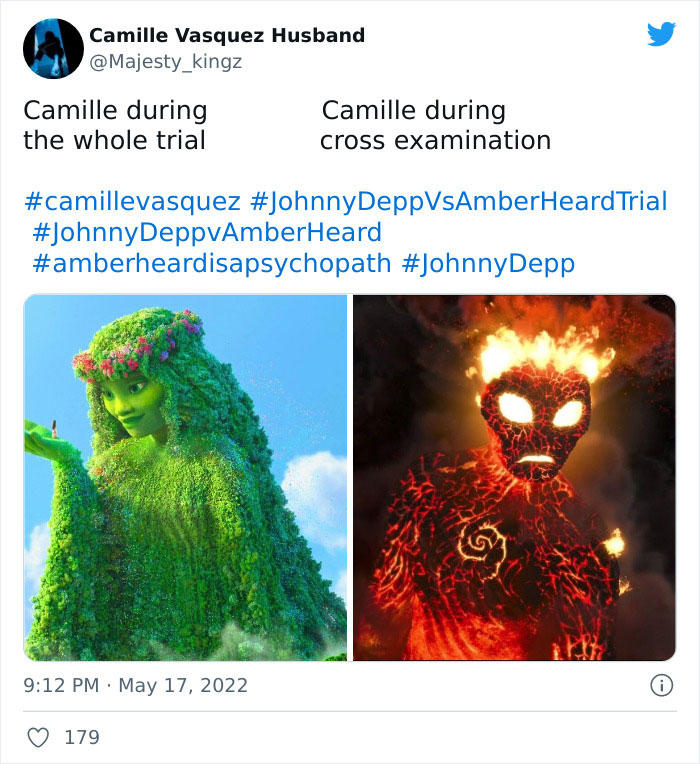 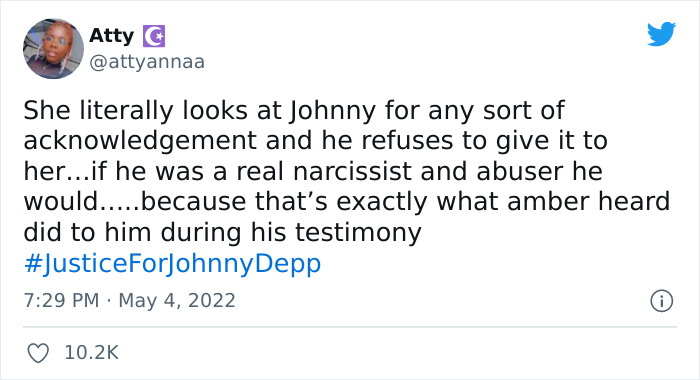 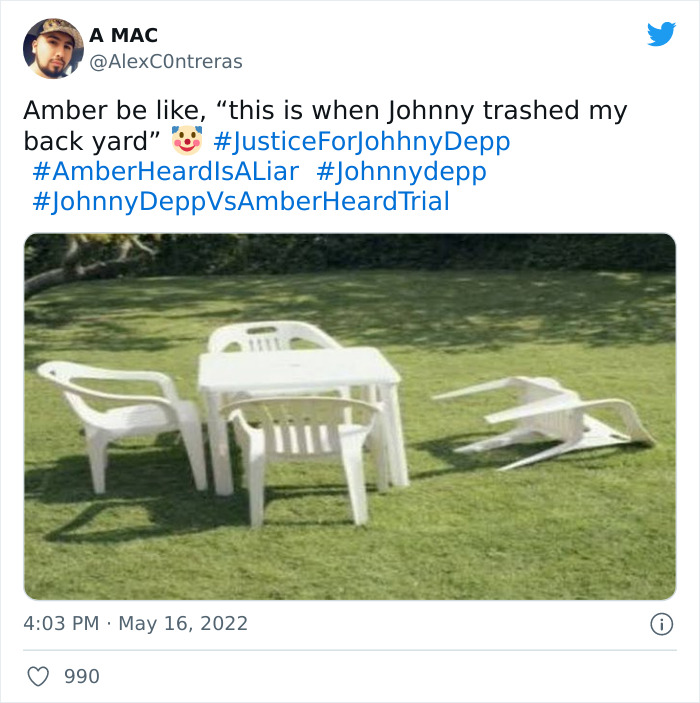 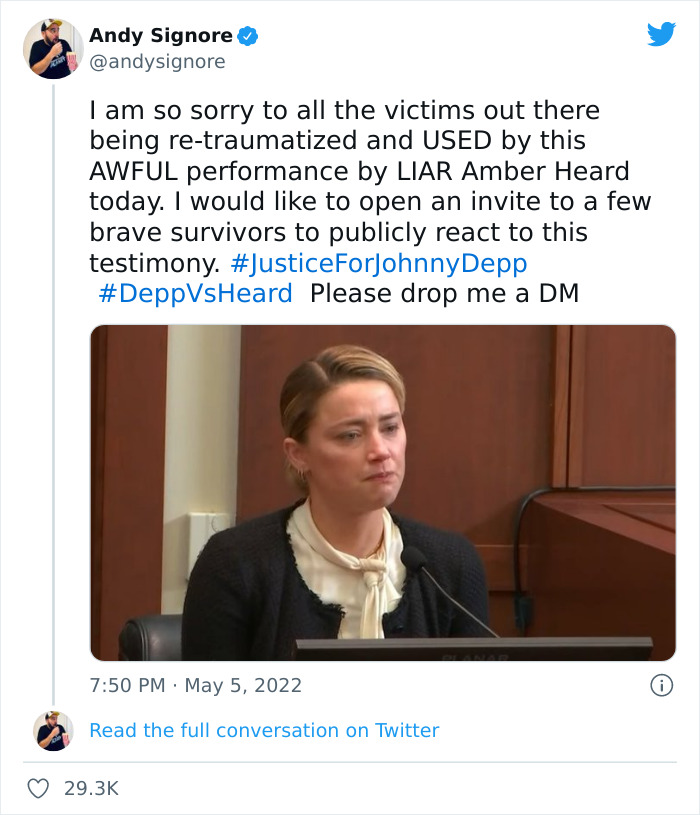 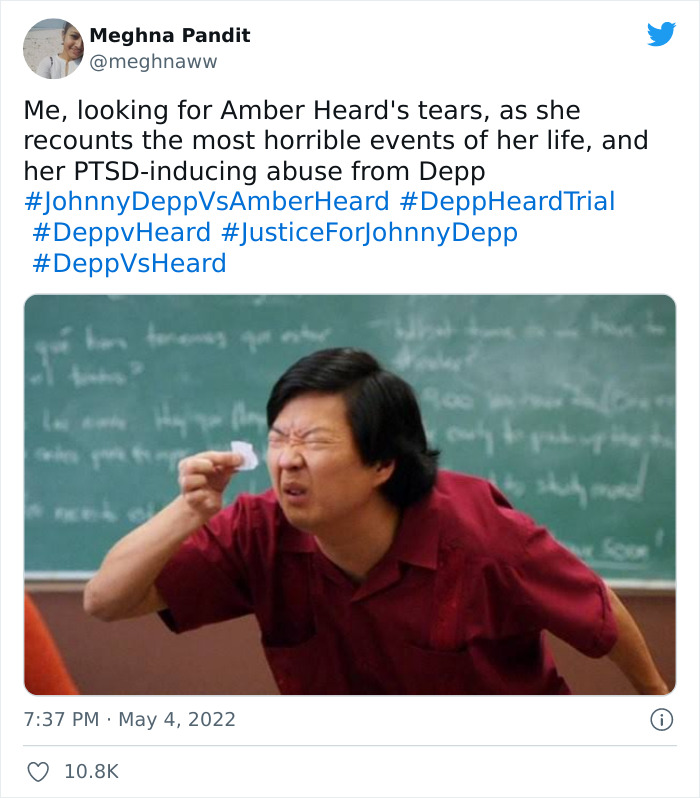 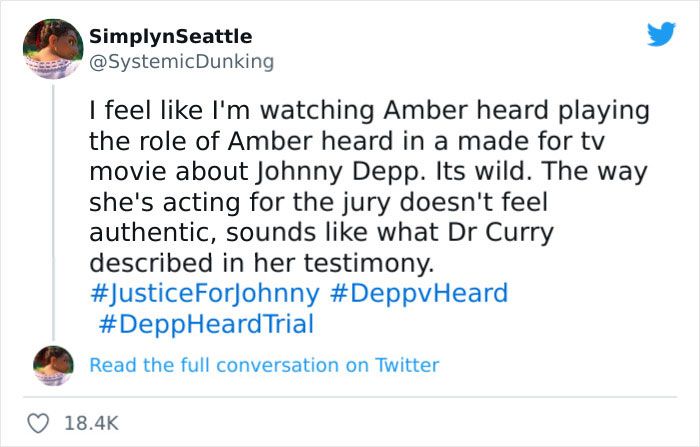 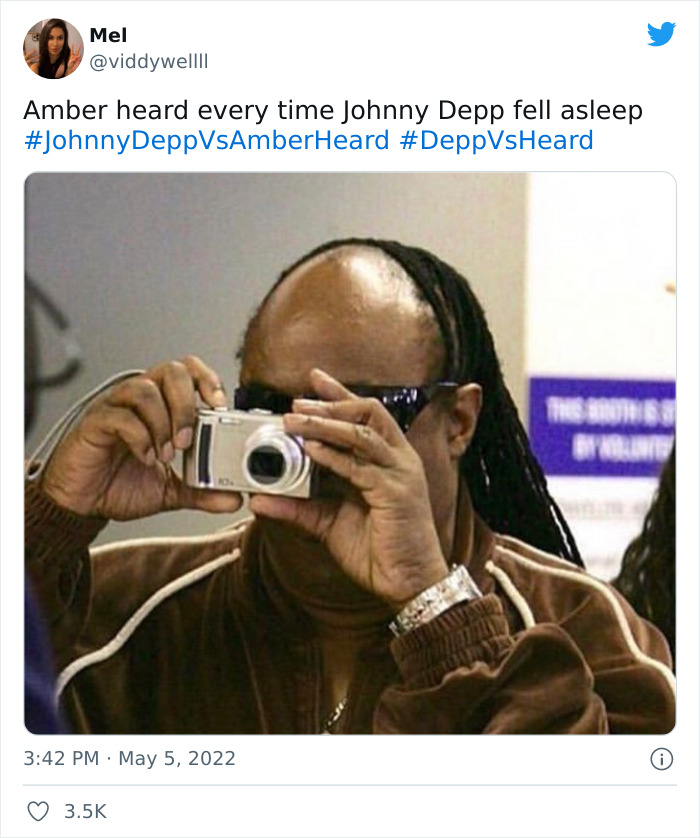 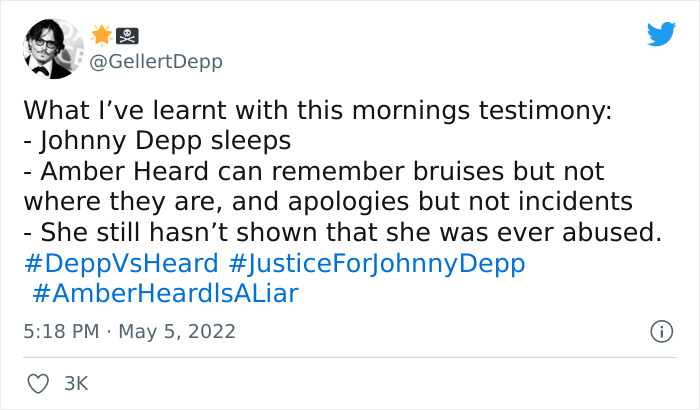 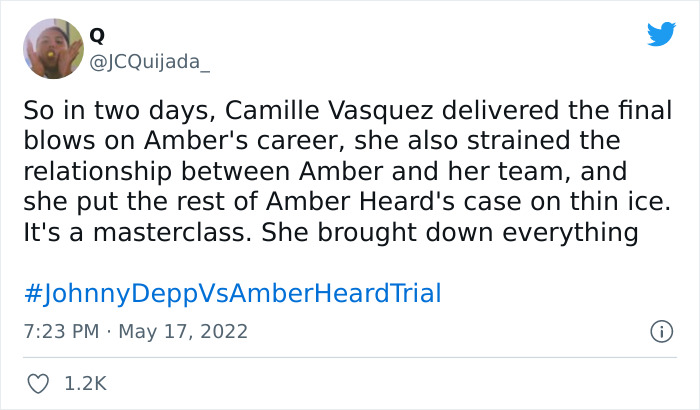 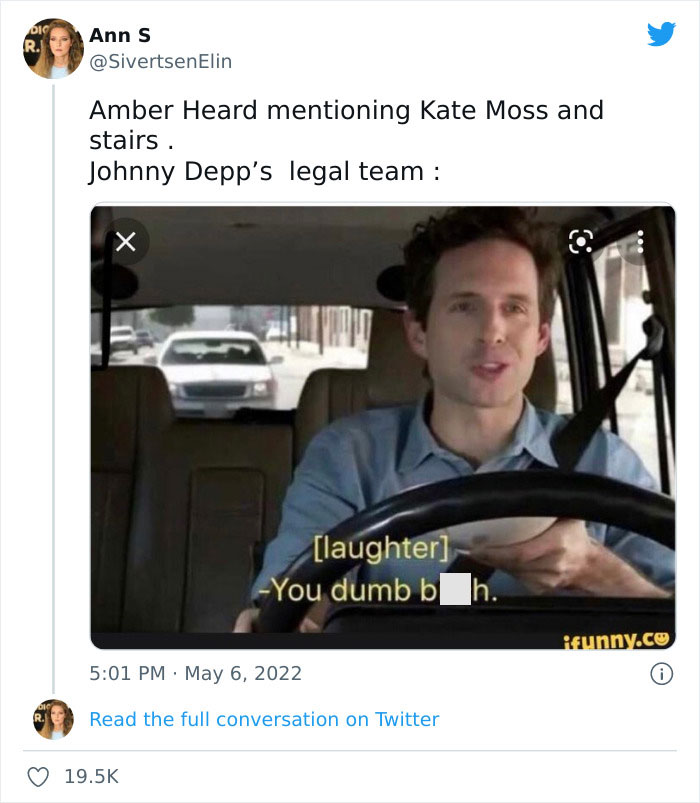 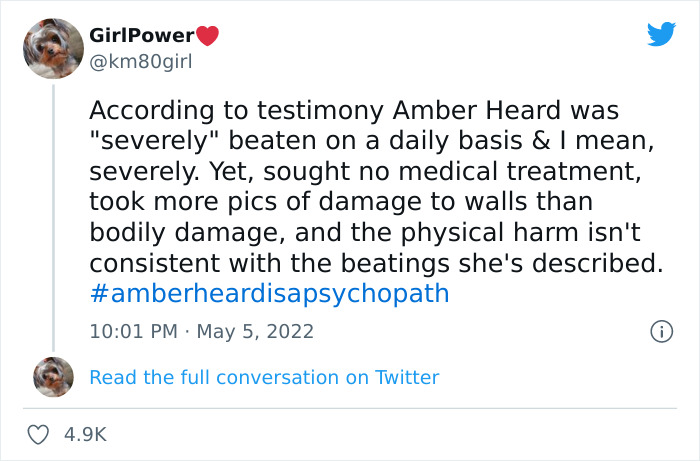 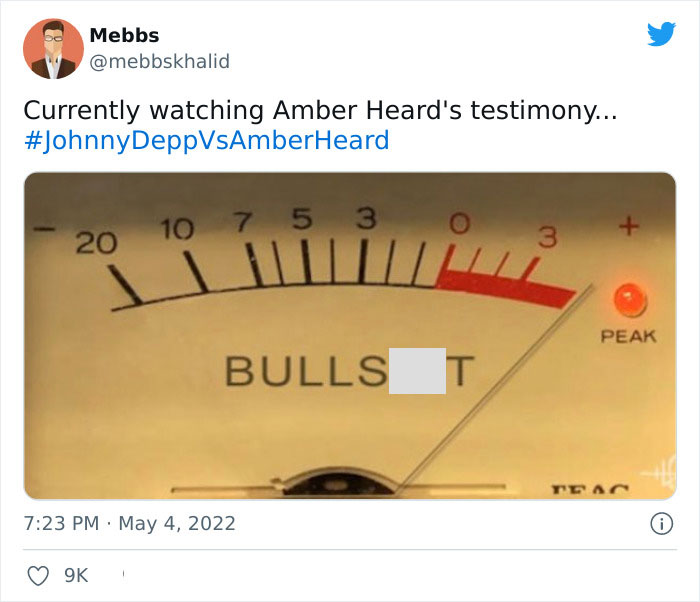 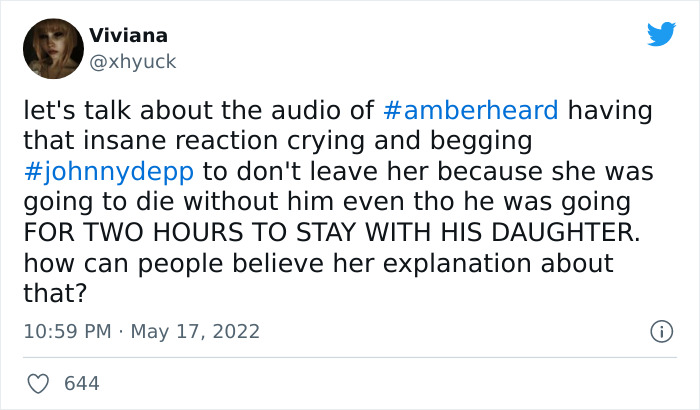 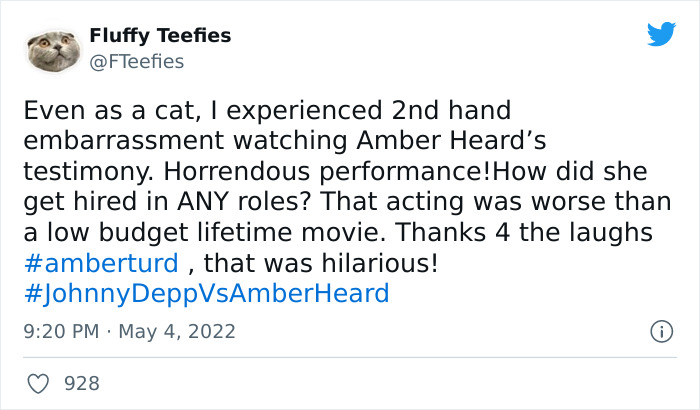 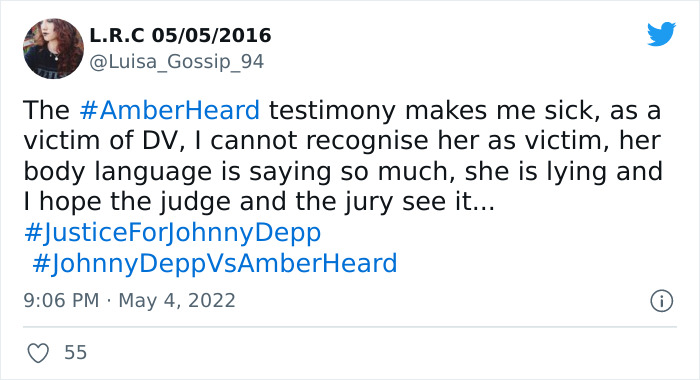 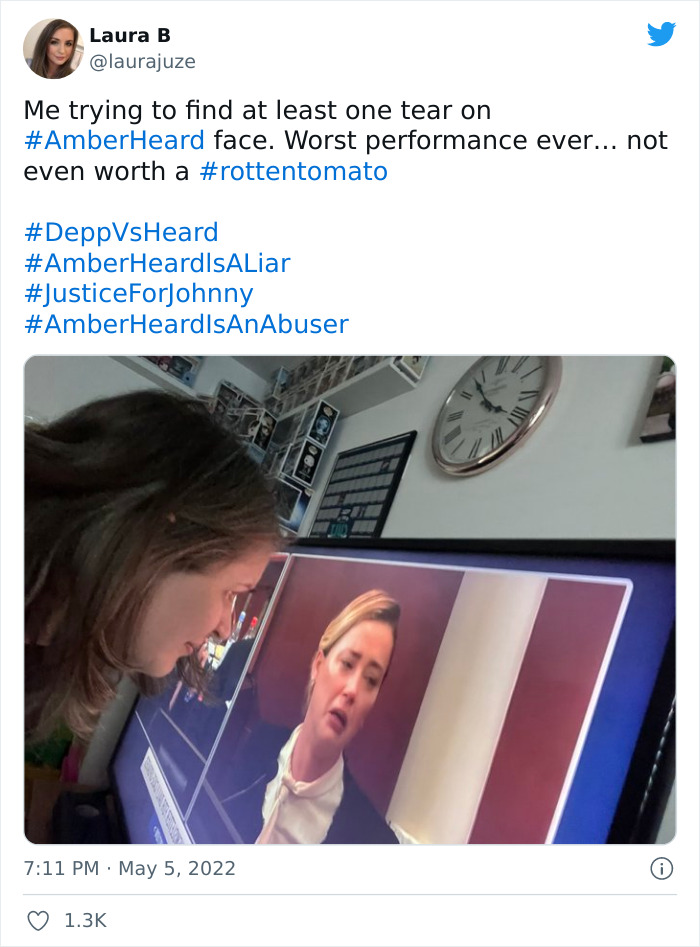 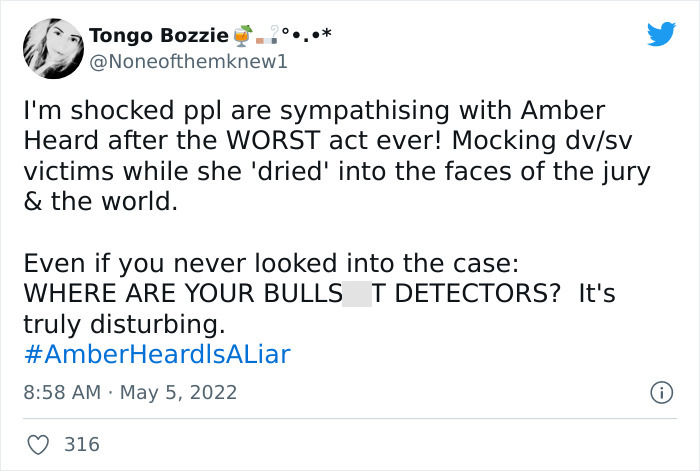 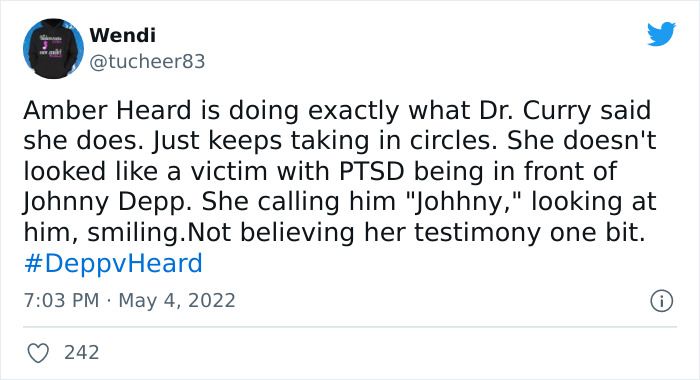 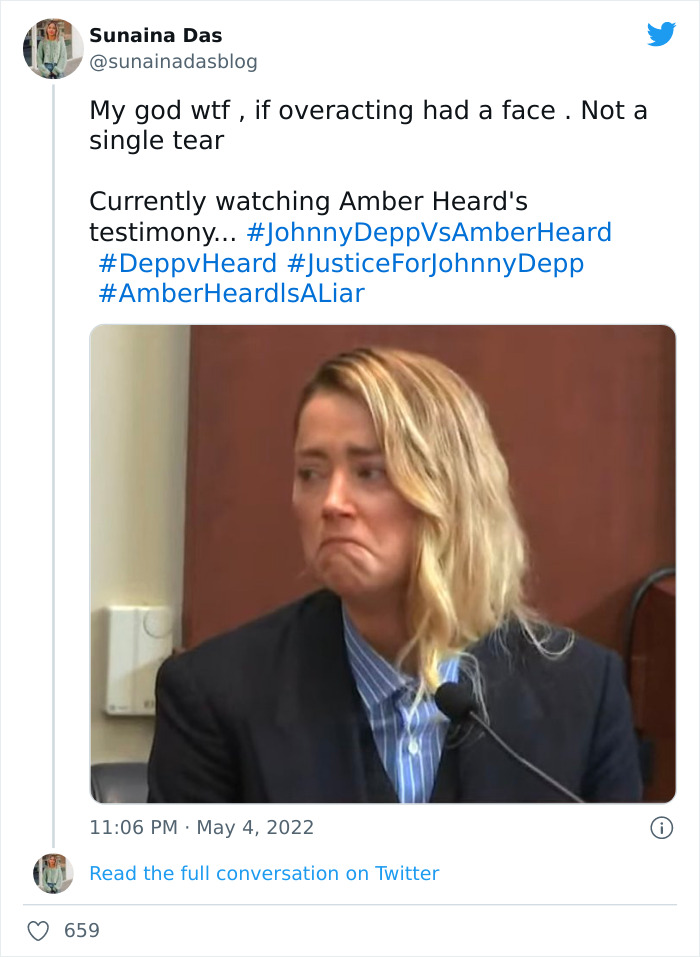