21 Y.O. Woman Gets Called Out For Refusing To Give Up Her Room Because Her Roommate’s Dad Needed A Place To Sleep

One of the most exciting things when going away for college is finally getting a taste of that newly found independence; you’re far away from your family, doing the things you want and, perhaps, not worrying about cleaning your room. However, not everybody can afford an entire apartment, and instead, they look for a place to rent with strangers. And when they first meet their new roomies, it’s like a gamble – will they be their BFFs, or will they make their life a living hell?

Naturally, the first few weeks are a blast – you’re getting to know each other, sharing your life stories and having fun. But once everybody gets comfortable and people’s characters come out, you might catch yourself dealing with a questionable and even inappropriate request.

Apartment sharing might seem exciting to some – however, it definitely comes with its cons 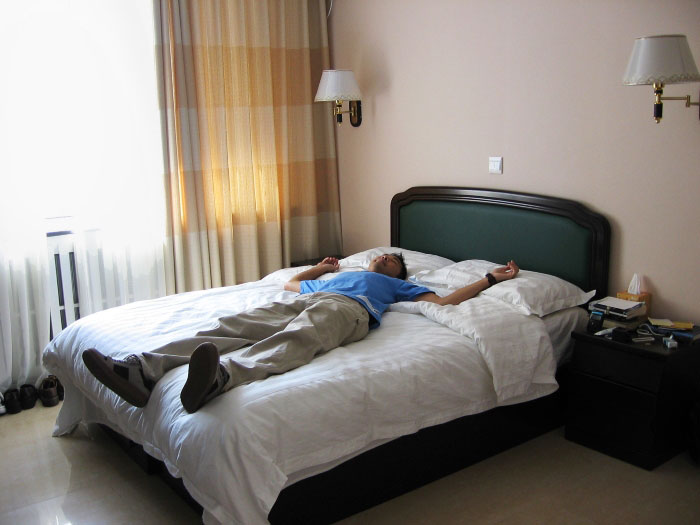 “AITA if I don’t let my roommate’s dad sleep in my bed?” – this university student took it to one of Reddit’s well-liked communities to seek help from the members and find out whether she’s really a jerk for refusing to give up her bedroom to her roommate’s dad who is coming over to visit for graduation. The post has managed to receive nearly 12K upvotes and 1.7K worth of comments discussing this absurd situation. 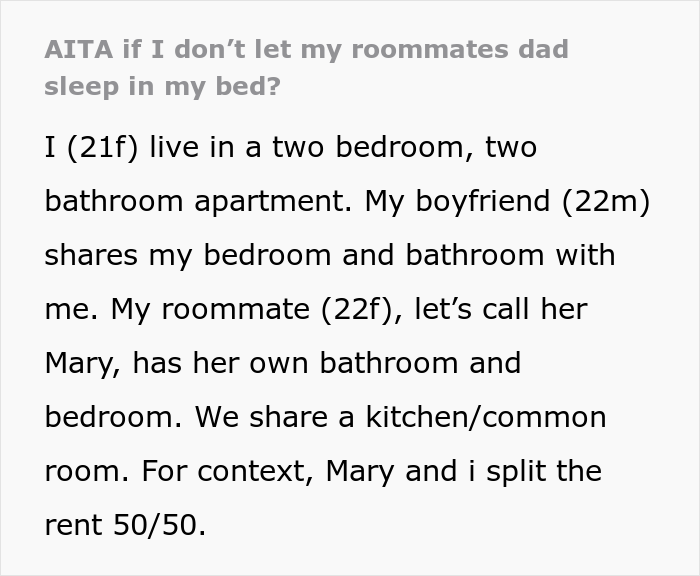 The author began her post with an introduction; she lives in a two-bedroom and two-bathroom apartment together with her boyfriend and a roommate. The couple and roomie each get a separate bathroom, while they share a kitchen and common room, and the rent is split equally. 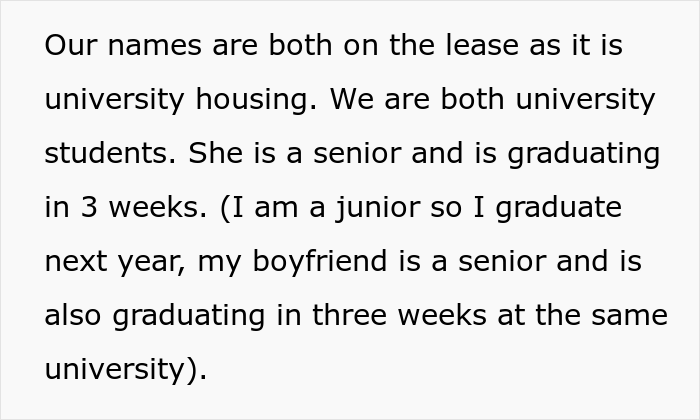 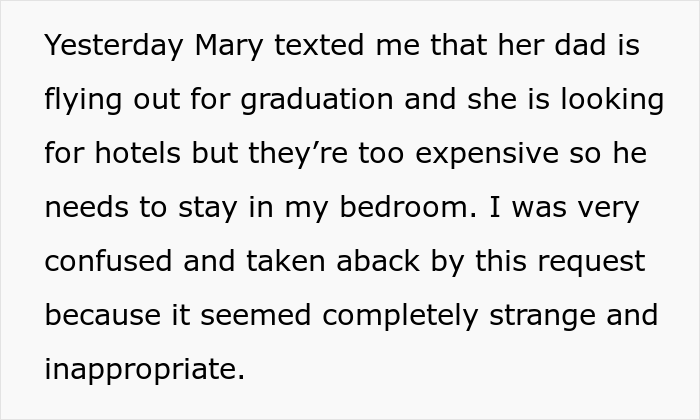 The woman mentioned that both her and Mary’s names are on the lease as it’s university housing. Mary is a senior and is graduating in a few weeks, whereas the OP is a junior and will graduate next year, though the author’s boyfriend goes to the same college and will be graduating in three weeks as well.

A couple of days ago, Mary texted the OP saying that her dad is flying out for her graduation and because the hotels are too expensive, he needs to stay in the woman’s bedroom. Naturally, the author was taken aback by this rather strange request and refused immediately. 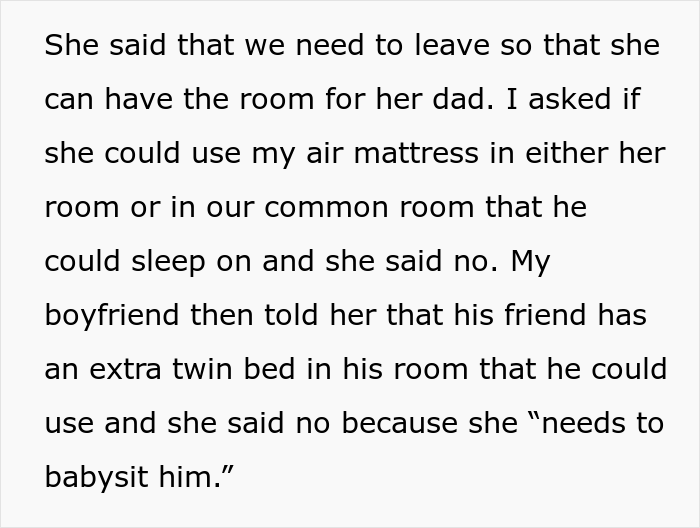 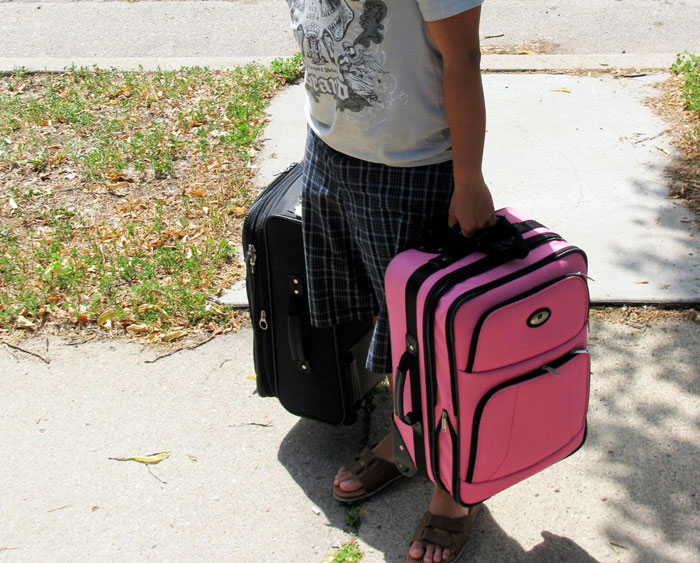 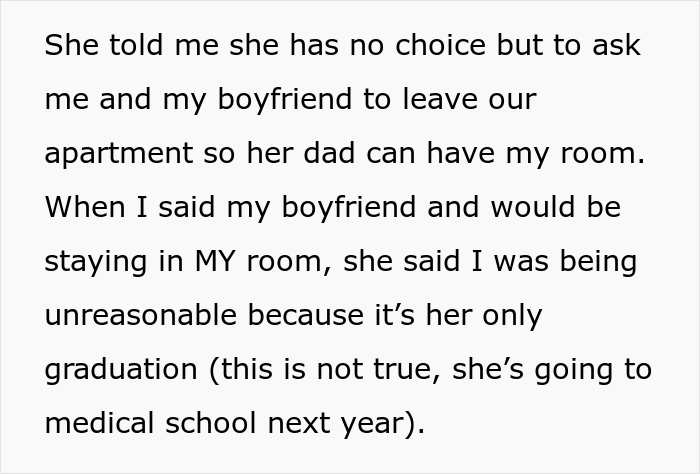 Mary kept insisting and asking the woman to leave – however, instead of arguing, the OP tried to come up with alternative decisions. She said that her dad could use her air mattress and either sleep in her bedroom or in the common room, though the roomie kept declining. The author’s boyfriend also joined the conversation and said that his friend has an extra twin bed that the man could use but, once again, Mary said no and backed it up with the fact that she has to “babysit” him. When the author said that she and her partner are not going anywhere, the roommate told her that she’s being unreasonable because it’s her only graduation. 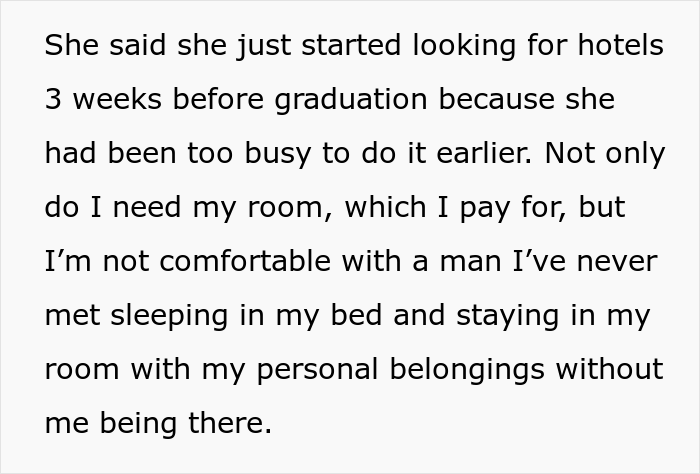 Mary then mentioned that she started looking for hotels only 3 weeks prior to graduation because she was busy, but the OP is simply uncomfortable with having an unknown man sleeping in her bed and staying in her room with all of her personal belongings unsupervised. 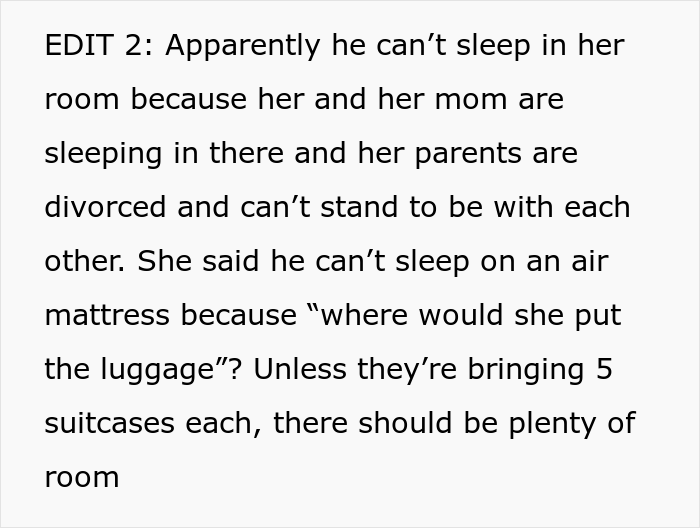 The college student later edited the post and revealed that, according to Mary, her father can’t sleep in her room because her mother is also going to be present and the ex-spouses can’t stand to be with each other. And considering the air mattress, Mary is worried that if they use it, they won’t have space for their luggage. 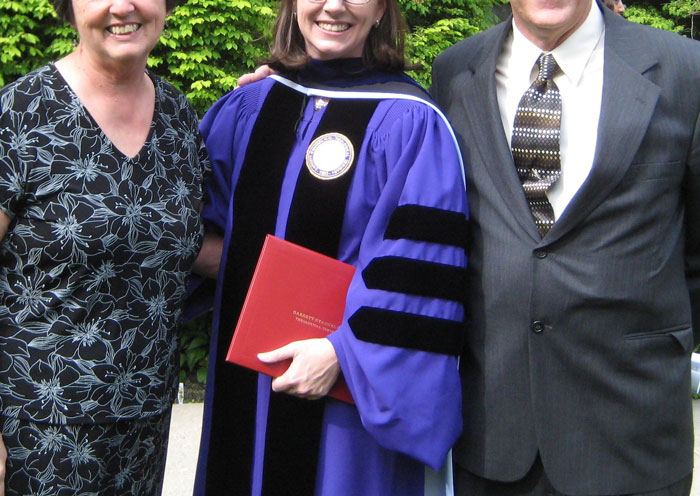 We’re left to guess whether the OP and Mary have found a way out of this situation, yet it is quite obvious that the roommate’s request was completely inappropriate and, frankly, creepy. What would you do in this situation?

Fellow Redditors shared their thoughts regarding this out-of-place request 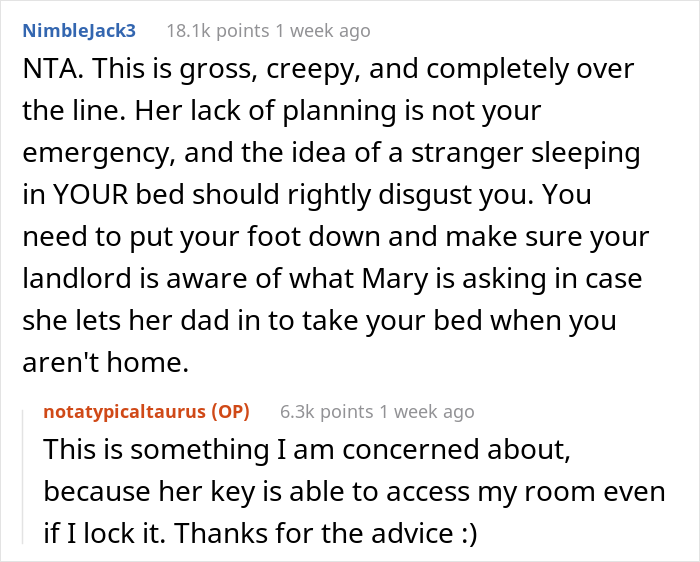 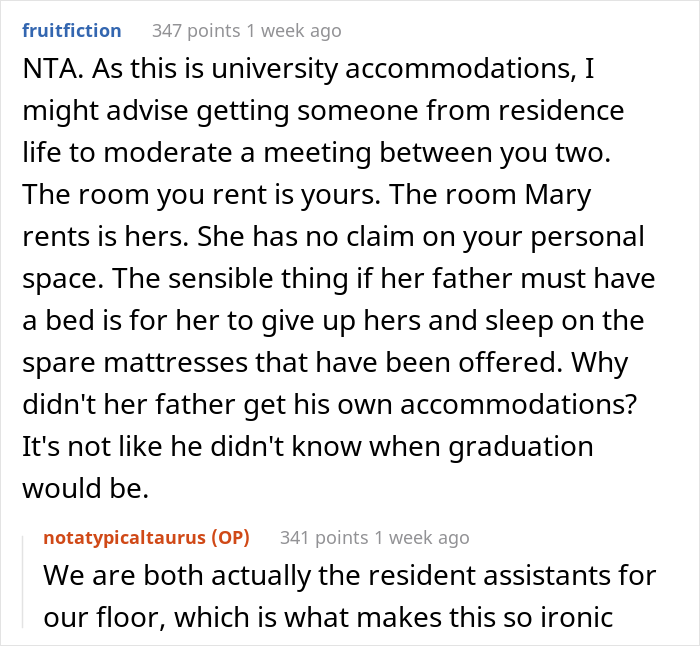 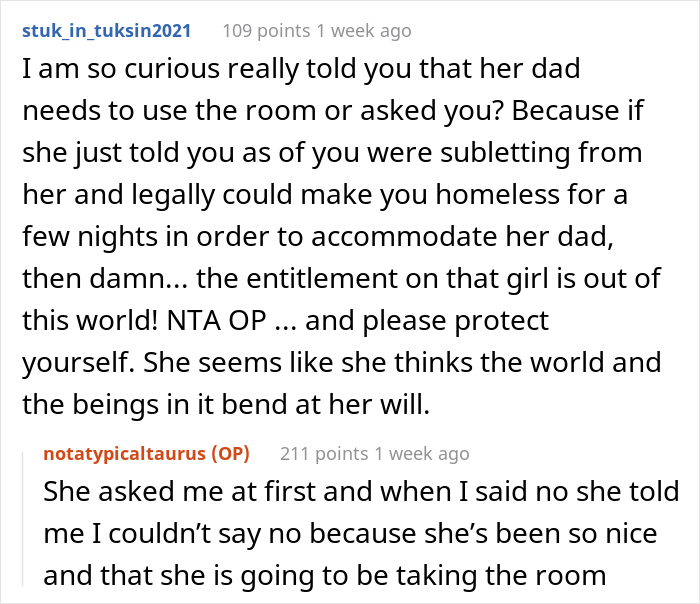 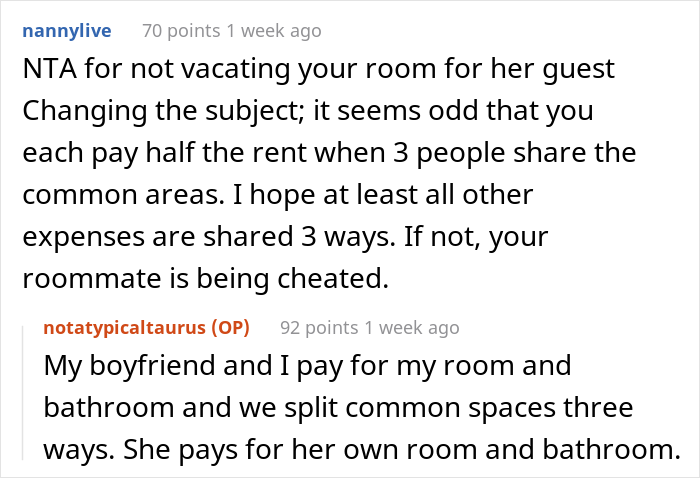 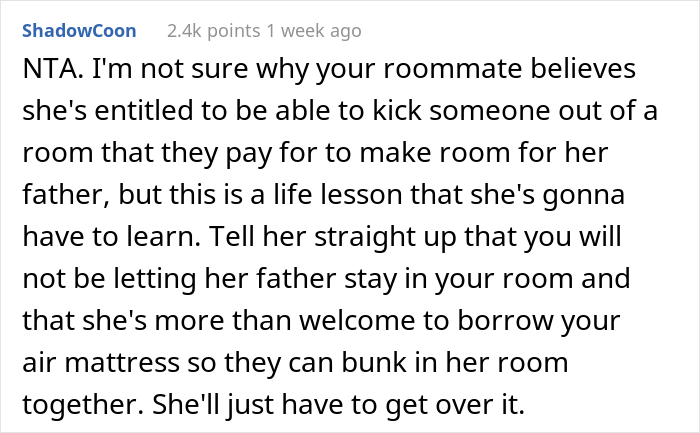 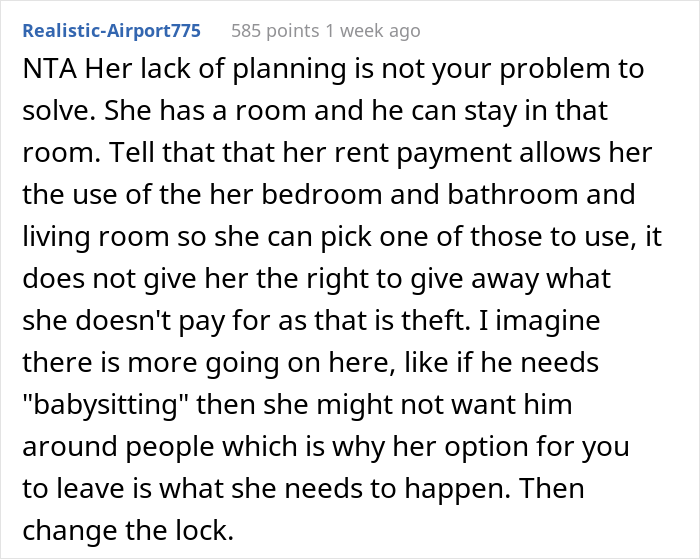 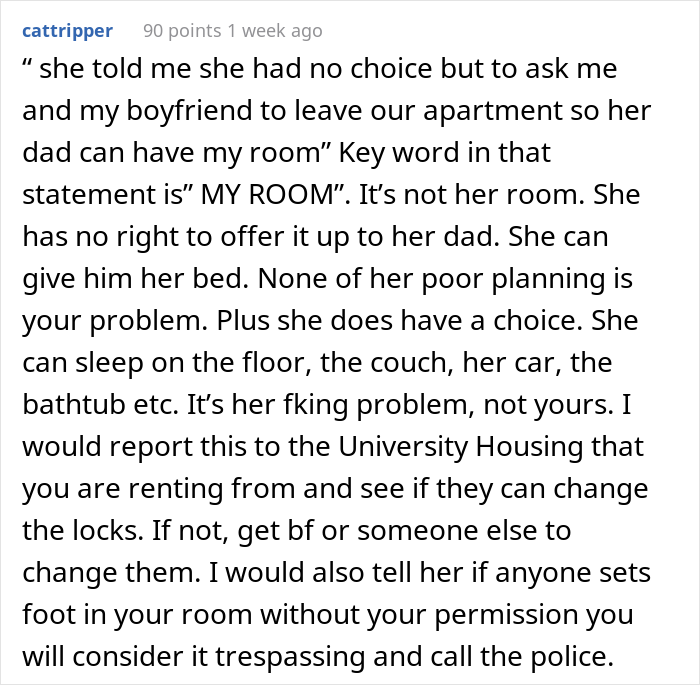 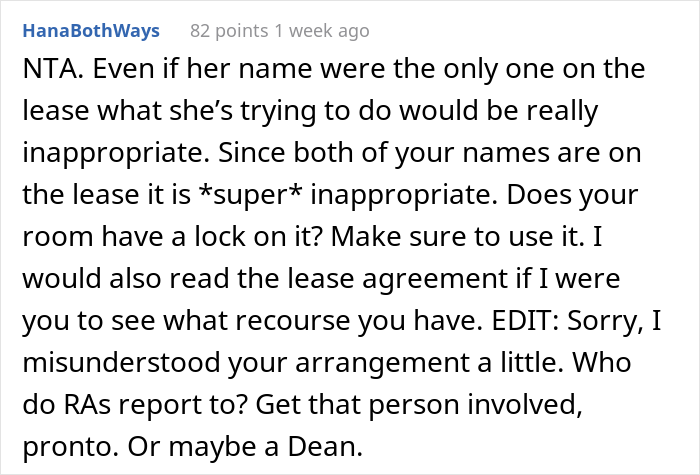