Kind Neighbors Raised $53,000 For New Bike And Car For Young Man Who Walked 8 Miles To Work

Kind Neighbors Raised $53,000 For New Bike And Car For Young Man Who Walked 8 Miles To Work
When a kind man learned that a 20-year-old cook was having to walk eight miles to work each day, he asked his neighbors to come together and help him, and help him they did.

Michael was concerned for the young man as it was so hot outside and he seen him walking a long ways, so he decided to offer him a ride. The young man gratefully agreed, and the two of them had an enjoyable conversation during their drive.

Michael learned that the young man’s name is Donte Franklin, that he’s 20-years-old, studying to be a welder and works two jobs; one as a cook for Buffalo Wild Wings. He lives a little more than eight miles from the restaurant and didn’t currently have a car or a bike, so each day he had been walking to work. It took Donte roughly two and a half hours to walk to work, and then another two and a half hours to walk home after his shift, making his one day journey 17 miles roundtrip.

“I really don’t care if it gets tiring. I just have to keep pushing,” Donte said.
After dropping him off at work, Michael reflected on the situation a bit more that day. He was amazed at how this young man was overcoming such a struggle in life, and his heart felt moved to help him if he could.

Michael shared his experience with Donte on Facebook and asked his friends and neighbors if there was anything they could do to help him. A neighbor, Kerri Collins, read the post and was also moved by Donte’s situation. She has a charity called My Riding Buddies and messaged Michael to let him know that she wanted to help.

“Anytime I see something posted concerning anybody anywhere in Oklahoma, I immediately jump in and we do whatever we can as a group,” Keri said. “It just touched me that this man is only 20 years old and is walking to two different jobs with nothing in the heat. It opened my heart because kids his age don’t do that.”
Keri got in touch with Donte and gifted him a brand new bike before his next shift. 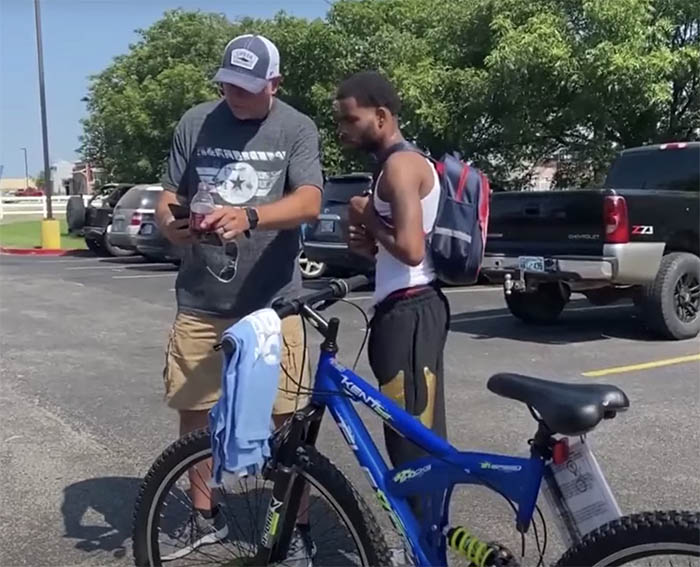 Yet Michael’s neighbors wanted to do more to help this amazing young man. They setup a GoFundMe and were able to raise $53,000 to help Donte get a new car and anything he needs. While he doesn’t yet have a driver’s license, he is going to get one, and will use the funds to buy a new car, and also to help his family. While he’s preparing to get his license, he plans to use his new bike to get to work.

“I can really help my family with this. It’s just a really good blessing,” Donte said. “I really appreciate it. I’m thankful for it.”
“He’s a great guy. He deserves this very much,” Michael said.

“I think we need to help each other. I love this guy like my own,” Keri said. “If it can [inspire] just one person go help someone else, that’s all that matters.”
Michael and Donte plan to stay in touch, as friends.

“As long as he wants to, I want to keep him in my life and I want to be in his life,” Michael said. “I told him, if the Lord opens the door for you, walk through it… walk through it… I think it’s open for him and the rest will be up to him.”

Watch this heartwarming interview with Michael, Keri and Donte: