Kind 5-Yr-Old Gave All He Had, 30 Cents, To Homeless Man; Line Of Cars Watching Gave Too

Kind 5-Yr-Old Gave All He Had, 30 Cents, To Homeless Man; Line Of Cars Watching Gave Too

After seeing a homeless man on the side of the road, a kind 5-year-old gave him all of the money he had.

While driving his 5-year-old home from the dentist, Justice Smith was sitting in rush hour traffic and noticed a homeless man in the median strip in the road. He quietly thought to himself for a minute; that he wanted to give something to him, but he didn’t have any cash.

“As our newly turned 5-year-old and I were coming back from the dentist, we saw a homeless man in the median,” Justice shared in a post online. “I wanted to give him money, but didn’t have any cash on me, so I just nodded my head and waved to him with a smile. Our son noticed the man as well.”

His son, Justus, saw the homeless man too, and without his dad saying anything, he told him he wanted to give all of the money he had in his pocket to this man; 30 cents.

“And then it happened… Uncoached, he insisted that I give the man the 30 cents he had in his pocket. It’s almost as if he heard my thoughts and responded out loud…”
“I was more than happy he wanted to do this with joy (it means he’s been watching), BUT honestly I was hesitant. I didn’t want to give this man who clearly needed all the help he could get, just 30 cents. I quickly realized that the traffic light would turn green at any second. I then thought to myself, “Dude get over it. Leading by example is what we’ve been teaching him, so now let him lead. Let him give what he can to this man…”
His son gave the man what he had, and the kind gesture made the homeless man smile.

“I rolled down my window, then said, “I’m sorry man, I don’t have any cash on me, but my son back here wants to give you everything he has right now. He just turned 5!” And my God… The smile on that man’s face lit UP the intersection and he said to Justus, “God bless you little man! Thank you so much!’”
The cars behind them saw little Justus giving his coins to the homeless man, and they too were moved to donate as well.

“Our son’s pure and genuine act of kindness also caused a chain reaction behind us AFTER the light turned green in rush hour traffic. The number of people who rolled down their windows last second after his gesture to give to this man was simply incredible. Who knew it’d be our 5-year-old to start the blessing??” 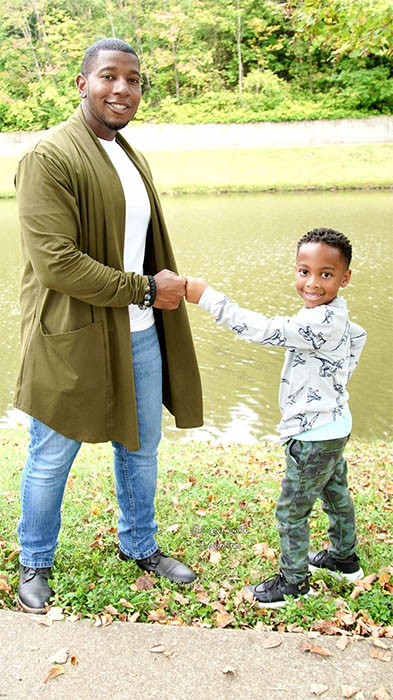 “It doesn’t matter how much you have or how little; giving in love and sincerity will often bless others more than we think. The only thing that matched the brightness of that stranger’s smile after that moment was the sun; and even more than that, the bigger smile on our “baby” boy’s face!!”