Kind 10-Yr-Old Makes Hand-Sewn Care Bags For Homeless Women; In 2 Years She’s Given Out More Than 1,000

Kind 10-Yr-Old Makes Hand-Sewn Care Bags For Homeless Women; In 2 Years She’s Given Out More Than 1,000

or the past two years, Khloe Thompson has been making sure that her homeless neighbors she sees each day know how much they are loved.

Khloe sews and creates “kare bags” filled with essential toiletries for homeless women and men and gives out as many as she can make each week. Since she first began handing out her kare bags two years ago, when she was just 8-years-old, she’s been able to personally give out more than 1,000 to the homeless.

Her kind heart began first inquiring about the homeless during her walks to school in Los Angeles with her mom, where they would pass homeless people sleeping in tents in the park and in sleeping bags on the street.

“I would pass the same homeless people, and then I would always ask my mom why or how did they get there?” Khloe explained.

“We passed a lot of homeless people,” her mother, Alisha Thompson, said. “She would ask me ‘Why are they there? Why are they sleeping on the ground?”’
Khloe learned from her mom what homelessness was, and she said that she wanted to find a way to help them.

“How can I help the homeless people?” Khloe asked her mom.
“What do you think the homeless people need?” her mother said.
“Well, I guess they can’t take showers,” Khloe answered.
Her mother at first suggested that they might need basic toiletries such as soap and washcloths. Khloe expressed that she really wanted to help homeless women, and their donation list grew to include deodorant, toothbrushes, toothpaste, hand sanitizer, lotion and feminine hygiene products. 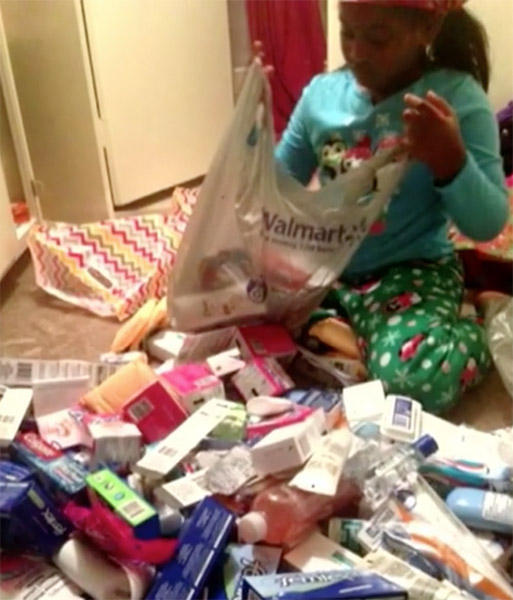 Rather than handing out the supplies in plastic bags, Khloe wanted to give the homeless hand-sewn bags so that they could ‘keep them forever’.

“I would think they could have a nice, sturdy bag so that they can keep [it] forever… and it wouldn’t just break like a regular plastic bag,” Khloe said.

Khloe had been learning how to sew from her great-grandmother, who was more than happy to donate extra pieces of material to Khloe for her beautiful project. Her mom also agreed to help buy the toiletry supplies to support her daughter’s kind idea. 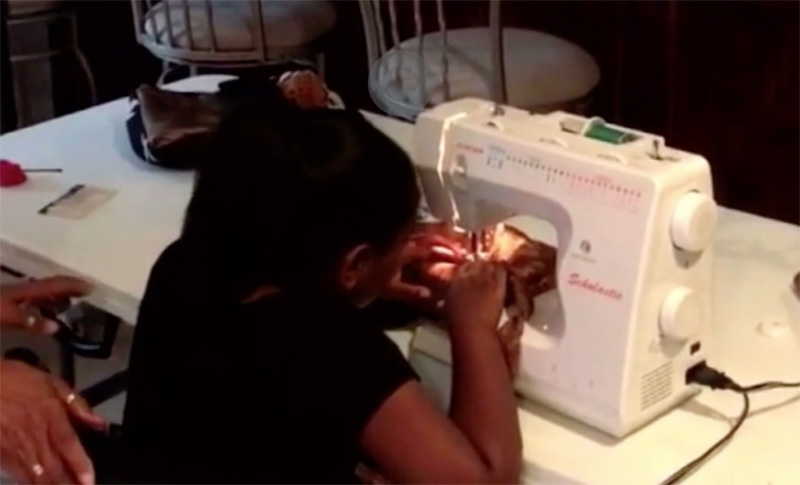 After getting the kare bags prepared, Khloe walks around her neighborhood with her mother and gives them to homeless women they see.

“I introduce myself and I say, ‘This is for you,”’ Khloe explained. “They say ‘Thank you,’ and ‘God bless you’ and they give me hugs.” 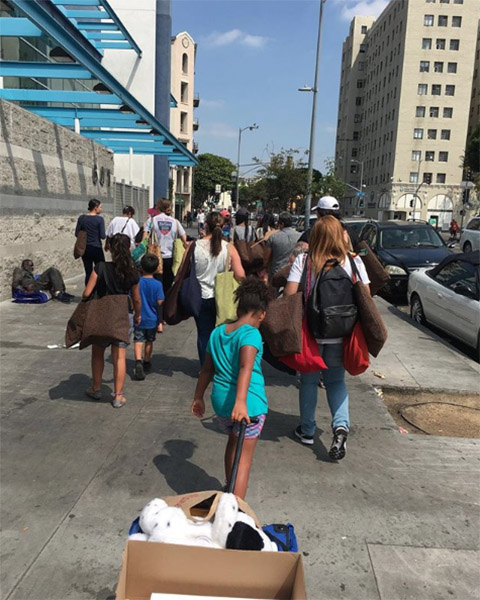 “Khloe has something about her where people really warm up to her quickly,” her mother said. “She always makes sure she introduces herself, she makes sure that she tells them what she’s giving them.” 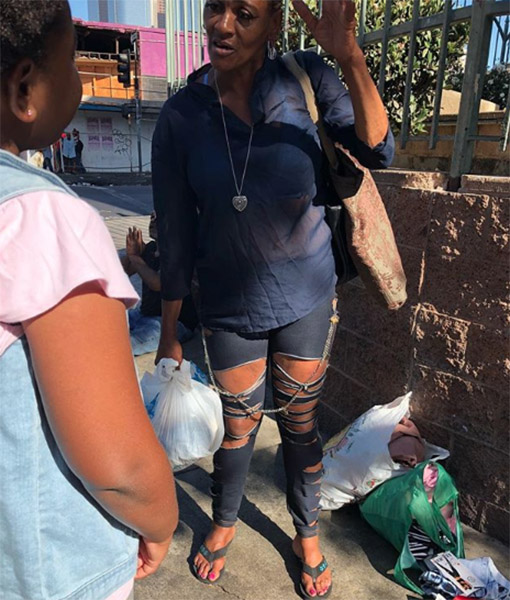 After a few weeks of seeing Khloe giving her kare bags to the homeless, her mother was proud so that she posted a picture of her daughter’s good deeds on social media. Shortly after, her friends said that they too wanted to help donate supplies to her daughter’s cause.

“People started coming to my work and dropping off bags of stuff,” Alisha said. “We have huge boxes of stuff donated to our door.” 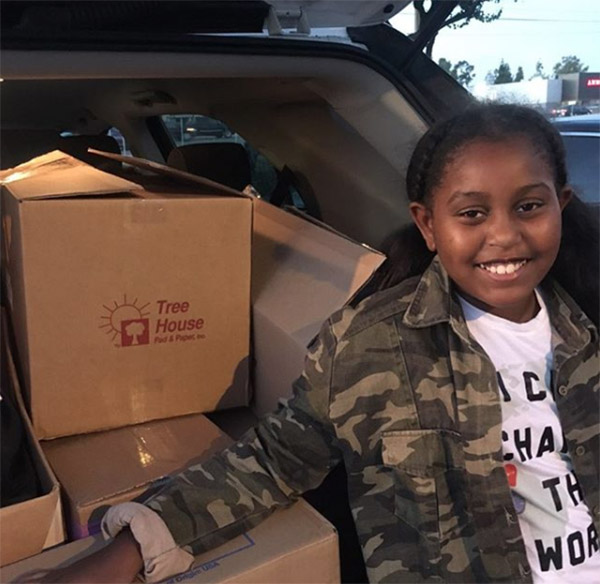 Of the hundreds of homeless people Khloe has helped, she said a certain thank you from one homeless lady really opened her heart.

“You make me feel like a human being,” the homeless lady told Khloe. 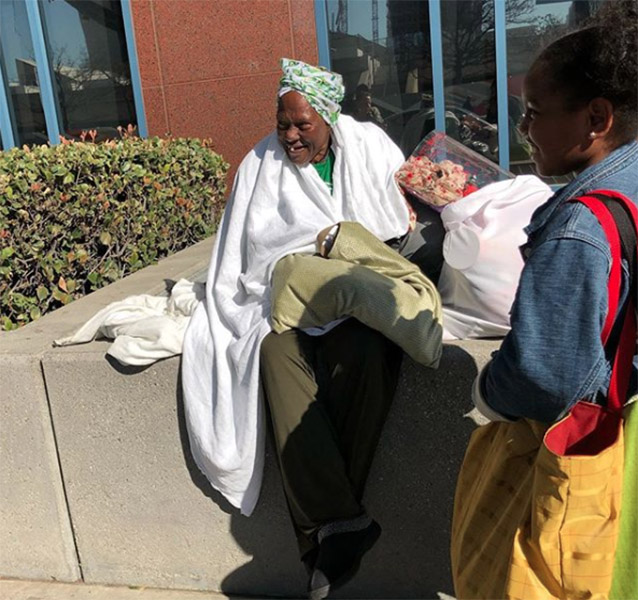 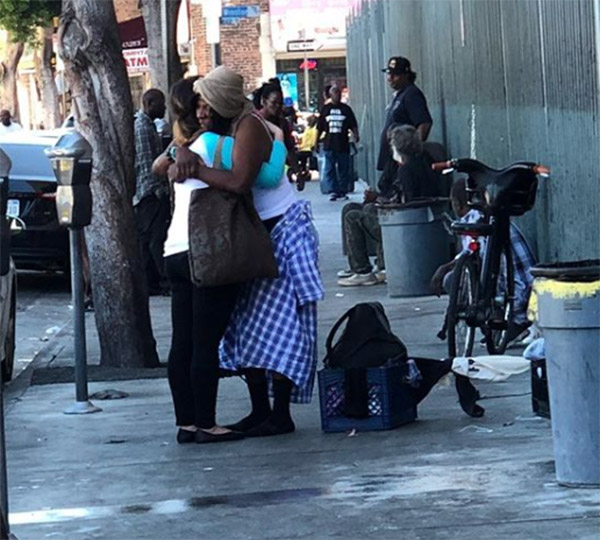 “It actually really touched me,” Khloe said. “Because she said what I gave to her is making her feel like a normal person just like us.”

Khloe also wants to inspire others to be compassionate to the homeless and has some beautiful advice for how to view those who sleep rough:

“Don’t be so afraid of them; they’re just a normal person like you.” 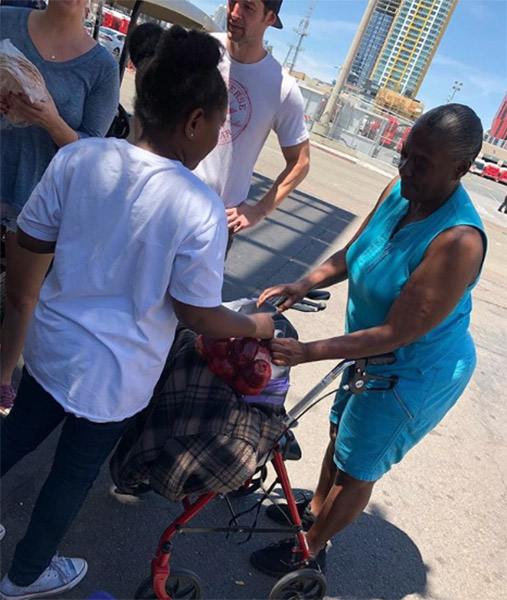 Khloe teamed up with another 10-year-old philanthropist who has been working to help the homeless, Jahkil Jackson, and together they set out on a 4,000 mile tour of the U.S. to help the homeless. They journey to homeless shelters in different states and provide the people there with care packages which they put together themselves. They also taught numerous youth leadership workshops to inspire other children to get involved in helping the homeless in their communities.

“We stuffed over 250 blessing bags and took them down to a shelter in Chicago,” Khloe wrote. “Jahkil and I are just two kids trying to make a difference and we want to inspire other kids to make a difference too. There are so many ways to be a change-maker. It all starts with a plan.” 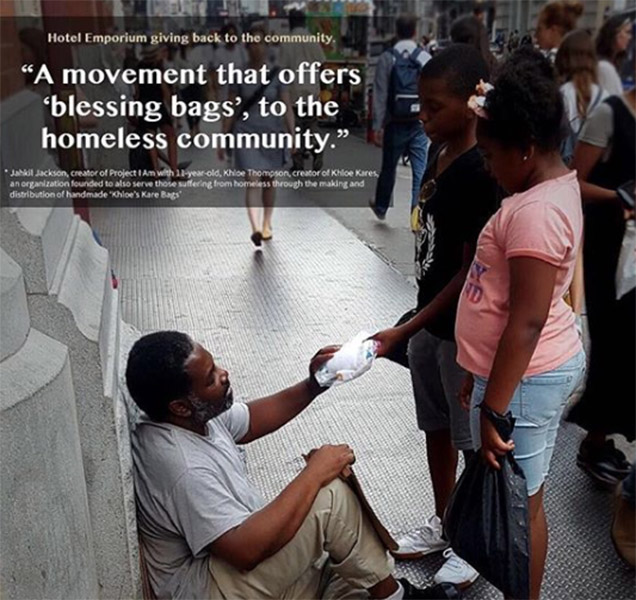 After helping more than one thousand homeless people in just two years, Khloe’s gentle heart wants to keep showing kindness. She hopes to inspire others to show more compassion towards the homeless community; to help us realize they are people just like us who need to be accepted and embraced with love.

Khloe says that she wants to donate kare bags to the homeless forever; until all homeless people can “get back on their feet.”

Please share kindness with others: when we share stories and examples of compassion and kindness, we inspire and encourage others to be kind and compassionate in their daily lives, making the world a better place for everyone.